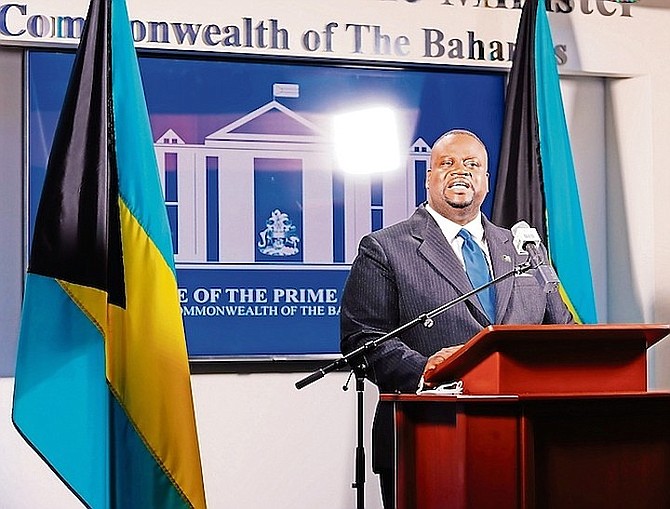 PRESS secretary Clint Watson has apologised on behalf of the government to the victims of Hurricane Dorian for the way in which the announcement of the upcoming memorial week was initially made.

During the Office of the Prime Minister’s press briefing, Mr Watson clarified that his comments last week, framing the event as a celebration without fully explaining the details of the week’s events, was not meant to offend any of the victims of Dorian.

Mr Watson acknowledged that some of his comments may have been offensive, especially to those residents of Abaco and Grand Bahamas who had sustained substantial damage from the passing of the storm.

“Last week we communicated a portion of the message for Dorian and I think for so many residents in Abaco and Grand Bahama, it created a great offence and so I wanted to clarify and first of all simply apologise to the people of Abaco and Grand Bahama who were offended by the manner in which the announcement was delivered and the fact that there was no conclusion on the entire week,” Mr Watson said.

“The people of Grand Bahama have suffered greatly and still suffer. They still have challenges dealing with Dorian that sometimes we forget about because we are not there or were not directly impacted by it. We don’t understand the amount of pain and suffering that they’ve faced everyday.”

He added: “It is not this administration’s desire to cause any more pain and suffering to any resident who’s gone through Dorian. And so we want to apologise first of all for the offence that was created and to come back this week to give the full outline of the week so that the people can see the importance of this and the need to participate in Dorian Week.

“We have suffered and lost so many people, it’s the worst tragedy this country has seen and that’s why it is so important that from now going forward, that we remember September 1st for Abaco and we remember September 3rd for Grand Bahama when Dorian claimed the lives of our loved ones, families and friends. The government is seeking to do that to officially memorialise persons who have lost their lives and to also bring a time of upliftment and healing to those who still find it difficult to face.”

Barronette Thomas, a resident of McLean’s Town, Grand Bahama who was affected by Dorian and was separated from her family during the storm recalled how she has dealt with being affected by the monster storm.

She was lost for three days and said though she may be considered a survivor or victim, she thinks of herself differently.

“To me, I am a victor,” she said. “I get so emotional when I talk about it, because it’s like I’m reliving every aspect of what happened.”

Her voice quivered as she agreed with Mr Watson and pleaded for the Bahamian people to stand with her as she supports people in Grand Bahama still facing hardship.

She said embracing the Dorian Memorial Week was a step in the right direction.

“This is a step forward to us having closure, and not only having closure on a small basis, but also on a larger scale,” she said.

It will observe the third anniversary of Hurricane Dorian making landfall.

The theme for Dorian Week is “The Courage to Rebuild.”

Events in the week include a weather symposium on Friday, August 26, organised by Bishop Silbert Mills. It will feature guests, including Dr Max Mayfield, a former director of the national oceanic centre among others. Prime Minister Philip ‘Brave’ Davis will open the event with an official address and those rescued by first responders will also participate.

On Tuesday, August 30, talk shows are asked to focus on Dorian and reach out to mental health experts, to help those still grieving to cope.

Following this, on Wednesday, August 31, the Disaster Reconstruction Authority will address the public with an update on repairs being started and continued on those infrastructurally affected. In addition, The Courage to Rebuild Dorian documentary will also be released on the same day.

Thursday, September 1, will be Remembrance Day and an official memorial service will take place in Abaco, including a wreath-laying ceremony. Flags also will be flown at half-mast. Dorian pins will be sold to commentate the victims.

The funds earned will go toward a Dorian Memorial fund.

On Thursday evening, there also will be a free memorial concert at Baha Mar featuring gospel singer Cece Winans and others, when those who attend can donate toward the Dorian fund.

On Friday, September 2, another memorial concert will be held at the New Life Worship Centre in Grand Bahama, featuring local gospel artists. Businesses also will be asked to offer special rates, discounts or initiatives.

The next day, a memorial concert at Friendship Tabernacle in Abaco will be held.

Finally, on Sunday, September 4, a memorial service will take place at Jubilee Cathedral in Grand Bahama, followed by three wreath-laying ceremonies, at the new monuments erected on the island.

The Courage to rebuild fund was formulated in an effort to assist in the rebuilding and relief for residents of Grand Bahama and Abaco.

The fund will be available for donations on Aliv’s online platform, togetherbahamas.com on September 1.

Kudos to Clint for apologizing. Many took the message the wrong way and the message itself was found lacking.

No offence but the majority of people in Nassau can never understand what it was like to live through the storm and subsequent aftermath. To sit in a fancy ballroom all dressed up, mingling and taking photos is insulting. The whole thing is a poor, tasteless decision, the anniversary should always be a somber national day of mourning where we contemplate the suffering of all those affected.

The dangers in pretending that the office of the premiership's current messaging is the least bad of alternatives. .. Should a Press Secretary's performance on messaging objectives ... Ought be a good enough reason for a Popoulaces'Commeners' to want to know ... What are the signs that this messaging is working ... And what can quickly happen to those elected ,,, When they begin to  blow a landslide Out Islands gifted House seat majority, and when ...  It appears it isn't working ... *nor believed ... ― Yes?

In poor taste and still is. Any event held in Nassau would be in particular bad taste. No sense of proper decorum. Dorian Memorial fund? Who the hell can be trusted to administer that?