Down to work on legislative agenda 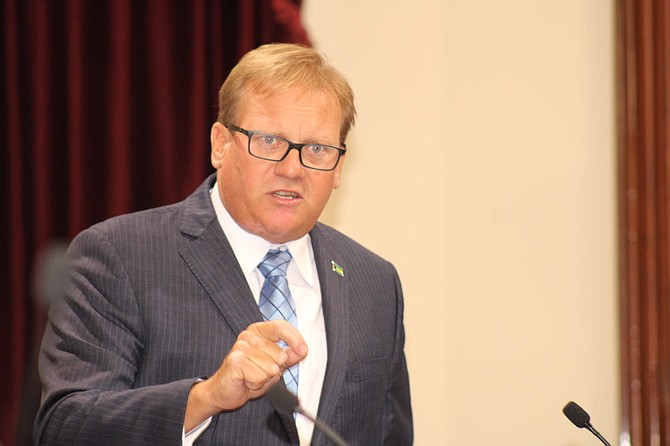 THE Davis administration intends to advance several pieces of legislation over the next six to nine months, including laws addressing finance reform, citizenship issues and medicinal marijuana regulations.

There will also be amendments to the Fiscal Responsibility Act and the Public Finance Management Act.

Attorney General Ryan Pinder yesterday said there were also plans to advance the proposed Nationality Bill, which he said will address the transfer of citizenship of Bahamian men and women.

Currently, children born outside of the country to a married Bahamian woman and a foreign man are not automatically granted Bahamian citizenship and thus must apply to receive it.

Bahamian men who have children with foreign women out of wedlock also cannot automatically pass on citizenship to their children.

Mr Pinder said the draft legislation that aims to address the country’s citizenship issues is currently under review and will be presented to Cabinet once all the necessary revisions have been completed.

A referendum will not be held on the issue of citizenship, Mr Pinder added.

Other legislative proposals that are expected to be presented to Parliament include bills addressing the regulation of medicinal marijuana and industrial hemp.

Mr Pinder said he has already received the first draft of the medical marijuana legislation and made recommendations, adding he hopes to have the proposed bill presented to Cabinet next month.

He foreshadowed what is to come when the House of Assembly reconvenes next month, during the Office of the Prime Minister’s press briefing.

“That bill has been sent to our international consultants for their review,” the senator added.

“They have assured me that I’ll get their comments back by the beginning of next week, which will be correlated and then we’ll do another turn of that bill and get it ready for public consultation.

Mr Pinder added the government was looking to present a separate piece of legislation to deal with the Indian Hemp legislation “to support our agri-business initiatives that we are very aggressive on in our blueprint for change.”

As a part of its legislative agenda, the Attorney General also promised major health reform in the country, pointing to the recently tabled Nurses and Midwives Bill 2022 and Mental Health Bill, 2022.

He said debate on the bills will begin soon and added there were plans to bring forth legislation dealing with crime prevention and intelligence.

As it relates to anti-corruption legislation, the Attorney General noted that it is currently being reviewed. He said the government has even engaged the assistance of international organisations.

“Because, as you would know, part of the issue with respect to anti-corruption in a small country is that everybody knows each other and if somebody is going to report a matter of corruption, they’re fearful that they wouldn’t be found or people would know who they are.

“So, we need a whistleblower regime in place to protect that, so the IDLO is working very closely with us,” Senator Pinder also said.

“We’ve met with them now, probably three or four times. They’ve given us an action plan on how they’re going to approach that and in the context of that, they’re going to expand beyond the legislative framework, and they’re working with the DPP to build capacity and corruption matters and then working with the Freedom of Information unit to help build capacity on how a Freedom of Information unit would have functioned.”

Mr Pinder said the upcoming bills are a part of the government’s efforts “in maintaining an aggressive posture” with its legislative agenda when the House meets after summer recess.

The House of Assembly returns September 14.

I read the first paragraph....is there an echo in this room? Am I nuts? is there anyone out there? Tribanon? Tal? ......I know I don't comment often but I read daily. Sincerely, "Jack"

This is the absolute of being indecisive. If you tune out these politicians today and then tune in 50 years later you’ll find out you have not missed a single thing. Imagine the people excited about these issues not only 25 years ago, but also 25 years later and even 25 years from now; waiting for a decision one way or the other. Now, imagine what you can accomplish waiting for nothing in the same amount of time; by doing things yourself and without them. What does it take to see it is not in the interest of these parties to sort out these issues in any timely manner or to the interest of the public but to keep fiddling and fidgeting around with these matters; solely in the interest of their party's?

The PLP is tinkering with the laws so that the politicians can further manipulate our finances to the detriment of our Treasury.

I hope they negate the clause that persons born to non Bahamian parents have a right to apply for citizenship. Those persons should instead automatically assume the nationality of the parent.

It wasnt mentioned here but I wonder how far reaching this is:

"He said this legislation will create a national infrastructure fund to develop infrastructure across the country using public-private partnerships."

“We also spoke in our Blueprint for Change about creating a fund to manage private holdings by the government in companies such as Cable Bahamas, such as Arawak Port and the list goes on,” Pinder said."

Who will be given the contract to manage the fund, how much are we talking about as the cost of management and does "holdings" involve more than market securities? For example there was a group of FNMs who wanted to own all govt buildings and manage them as some property fund.

I do applaud Mr Pinder for doing "something". He looks like a minister who understands that his job is more than putting up a billboard every religious holiday. I only hope there's not a rush to change for change sake without a full analysis of the repercussions. Too bad we dont have a functioning Senate of legal experts to do just that as they were meant to.