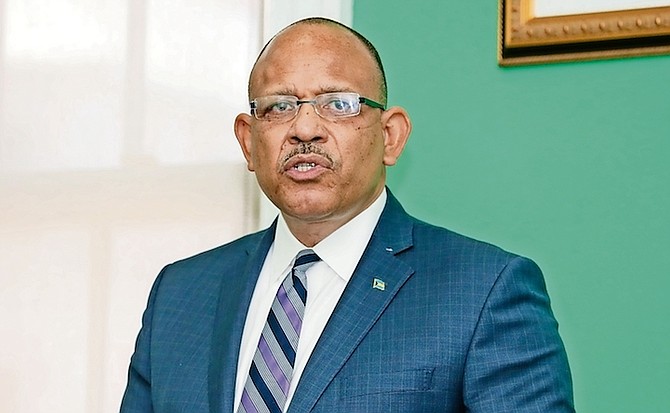 THE Free National Movement and the Organisation for Responsible Governance have questioned the Davis administration’s plan to fully rewrite the Public Procurement Act in advance of them reporting their actions.

Dr Sands said the Davis administration’s failure to uphold the current Public Procurement Act before deciding to change it is “not responsible governance” and called for the government to “abide by the law”.

“It is clearly not responsible governance,” he said. “Once you change the law, you do it the way you want. But until then, you must abide by the law. You can’t expect the general public to do as you say and not as you do.”

Dr Sands added that the past actions of the Davis administration should be taken into account.

“It is very disingenuous now that they have approved a number of contracts for millions of dollars and it is in defiance of the law. There is no excuse, they have willfully, neglectfully and regretfully broken the law. Guilty your honour, no explanation,” he said.

Mr Evans said though the announcement of the government’s plan to rewrite the act is sufficient communication and notice, more communication is needed to gain the trust of the Bahamian people.

“I think it is notable that they are communicating before this action is being taken,” he said.

“However, based on the previous statements that have been made, there definitely needs to be taken into consideration communicating with the public on what will become of the release of reports on contracts that have been done in light of these new developments. It is going to be important in this process of transition for there to be a plan to ensure that everything that has taken place since the bill was enacted, those contracts in that period, definitely need to be incorporated into the strategy of transition on the way forward and not simply abandoned. That would definitely not be a good example of responsible governance.”

He urged the Davis administration to always consult with relevant stakeholders as they seek to build greater trust with the public and consider the public’s thoughts on these types of matters.

“Maintaining and living up to commitments that have been made and communicating very clearly along the way with the public is going to be key to collaboration, citizen participation and public consultation, which will ultimately inform how these processes should work, making them meet the needs of the government and all other sectors that are involved,” he said.

The Organisation for Responsible Governance is a not-for-profit civic foundation aiming for responsible governance in The Bahamas.

The Public Procurement Act was passed under the Minnis administration last year in response to long-term criticisms surrounding the procurement processes in The Bahamas.

This Act requires the government to publish details of approved contracts and procurement activities within 60 days of the award of the contract.

In May, Economic Affairs Minister Michael Halkitis told reporters the government was hoping to amend the Public Procurement Act in the 2022/23 budget period with a view of making it “user friendly” to ensure better compliance and greater transparency.

On August 10, Prime Minister Philip “Brave” Davis added that before the legislation was brought to Parliament, officials would want to publish the proposed changes and seek public feedback.

However, since assuming office, the Davis administration has not yet complied with the reporting requirements of the current Public Procurement Act, but instead called for the Act to be fully rewritten for transparency, ease of administration and the ability to be able to govern with immediate priority in instances that require it.

Look who is talking about responsible government , who can forget Mr Smith case going all the way to the privy counsel and the so called feeding program in the words of Moses here is a wise and intelligent people Mr pinder along with others will get it right

For the country's sake, we need politicians who will have integrity in office. It's sadly lacking since Ingraham 1992-2002.

So Mr Sands, yall wrote a law that has no teeth? Has no mechanism of enforcement like the ones yall write for us? By the way aren't you supposed to be busy fighting Covid? How many thousand Bahamians died from Covid this morning?

You want to know a little dirty secret " Brave those voted for the bill" if it was so poor why vote to pass it. They want t change the law to fit the bullshit they already done.