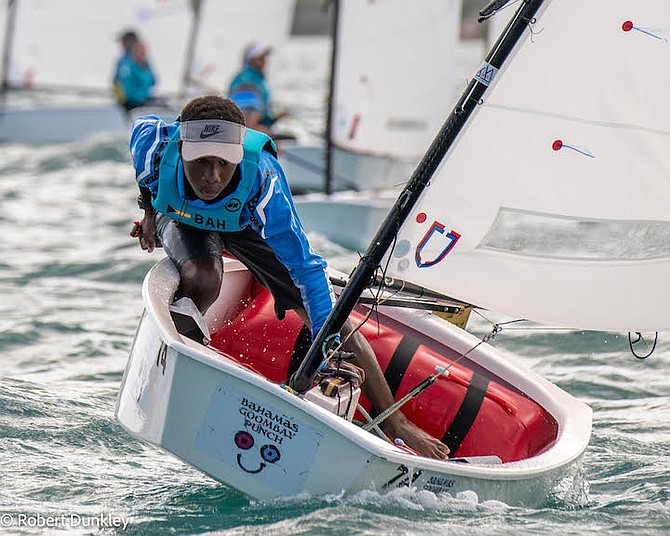 CRAIG Ferguson in action on the high seas.

FOLLOWING his outstanding recent performance - placing first in the silver fleet at The Optimist World Championships in Turkey last month - 15-year-old sailor Craig Ferguson has recently been offered the prestigious invitation to participate in a brand-new international event, “The Regatta of Champions”, scheduled to take place in Cyprus in November.

Not only did Craig finish top in his fleet of 69 boats, but he actually finished 6th overall out of all the North American participants in the competition of over 270 global sailors.

A brand-new event this year, the idea behind the Regatta of Champions (R.O.C.) is to gather the top 40 Optimist sailors from around the World to participate in a regatta to crown “The Annual Champion of the Bests”.

After the completion of all Continental, American, Asian, African and World Championships, invitations are being sent out to the top finishers in each.

An impressive prize fund of $40,000 will be split among the top 12 finishing sailors and the top three coaches in the form of scholarships for academic expenses and substantial monetary awards.

Unfortunately, after due consideration, Craig is graciously declining the invitation.

The dates of the event clash with OPTINAM (The Optimist North American Championship) which is being hosted here in Nassau at the same time.

He has made the decision of loyalty to The Bahamas National Sailing School and his home race team to stay in Nassau and compete in what is also a very significant event on the sports calendar.

OPTINAM will take place November 13-20 and is being hosted by The Nassau Yacht Club.

It is set to attract at least 160 sailors from over 20 countries to Nassau and will be the largest ever sailing event held in The Bahamas.

The Bahamas National Sailing School and Bahamas Sailing Association highly commend Craig’s decision and wish him continued success in his sporting achievements, according to a release.