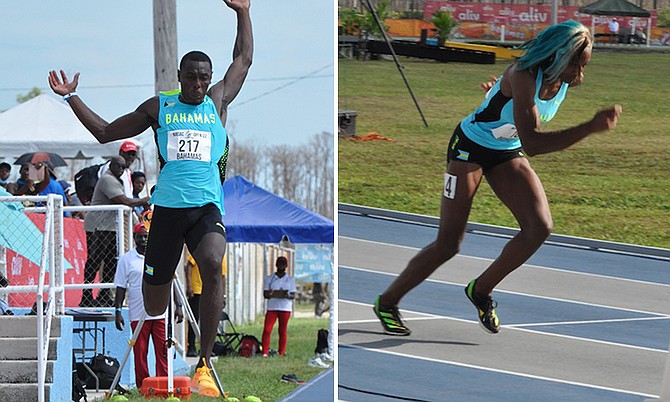 FREEPORT, Grand Bahama: Day one of the North American, Central American and Caribbean 2022 Anita Doherty Championships got off to a scorching start in the blazing heat on Friday at the Grand Bahama Sports Complex and produced some outstanding performances.

Vashti Cunningham achieved a championship record of 6-feet, 31/2-inches or 1.92 metres to lead a 1-2 American finish in the women’s high jump and Gabrielle Jennings produced another record in nine minutes and 24.36 seconds for a clean sweep of the women’s 3,000 steeplechase.

In finals featuring Bahamians, Kaiwan Culmer, coming off his seventh place finish at the Commonwealth Games, just missed a spot on the podium in the men’s triple jump with his fourth place with 51-0 ¼ (15.55m), while Kristen Hanna was sixth with 45-6 1/4 (13.87m).

Bahamian Tahejee Thurston had to settle for sixth place in the women’s hammer with her best toss of 180 (54.86m) on her second attempt.

World indoor and Commonwealth Games’ silver medalist Devynne Charlton got nipped at the tape by American Tonea Marshall (12.75) in the second of the two heats of the women’s 100m hurdles as she clocked 12.76 for the fourth fastest time for Saturday’s final at 5:40 pm. Jamaican Megan Tapper took the first heat in the fastest time of 12.62. Denisha Cartwright was sixth in the heat in 13.56, but didn’t advance.

“My start could have been a lot better, but it was a clean race and I didn’t hit any hurdles and I think I worked well on the back end to put myself in it,” Charlton said. “I felt the pressure of her (Marshall) next to me, but I had to keep my composure and keep myself steady and run my own race.”

Cartwright, who was coming off her double sprint appearance at the Commonwealth Games, said it was good for her to return to her specialty, but it wasn’t the type of performance she had anticipated.

Holland Martin landing in the pit.

In another close finish, Tynia Gaither earned her berth in Sunday’s final of the women’s 200m with her second place in the preliminaries in 22.82 behind American Brittany Brown, who took the tape in 22.82.

“I was pretty relaxed. Didn’t want to do too much. It’s been a long season, so I try to be smart in my runs, but I will be ready for the final,” said Gaither, who finished with the third fastest qualifying time.

Ian Kerr also got second in his heat of the men’s 200m preliminaries in 20.89 as he trailed American Josephus Lyles, who won in 20.29. It was the sixth fastest time for Sunday’s final at 4pm for Kerr, who predicted that he will run something fast.

“I really tried to stay composed and execute my race from start to finish, especially coming off the curve,” said Kerr, who noted that he heard the cheers from his family in the stands. “The first 110 was really important for me to set myself up to finish the race nice and strong.”

Olympic and champion Shaunae Miller-Uibo, the cream of the crop in the women’s 400m, breezed through the semi-final with the fastest qualifying time of 50.84 seconds in winning the first of two heats.

“I just give God thanks and praise. There’s no better place to be competing than at home, so I’m looking forward to getting ready for the final,” said Miller-Uibo as she looked ahead to the showdown at 6.15 pm on Saturday.

However, she dispelled the comments that she’s done running the 400m. She noted that her comments were originally taken out of context when she said she was just going to start training for the 200m.

“We’re still going to be doing the 400m,” Miller-Uibo proclaimed, adding that she’s just going to get some more speed in the 200m, but as the world’s best in the 400m, she said “I’m not just going to give up on it.”

Bahamian Janae Ambrose, fifth in the second heat, had the 11th fastest time of 57.58. “It was alright, but it was just so hot,” said Williams, who noted that in competing in her first NACAC Championships, she’s “looking forward to it”. “It’s hot,” she said. “I’m looking forward to this championships and the final tomorrow.”

She added that it’s going to be interesting matched up against Miller-Uibo – the first time that they will face other in a final. Looking forward to running another 49 seconds, Williams said: “I know she will push me.”

Two Bahamians advanced from the qualifying rounds of the men’s long jump with Commonwealth Games champion LaQuan Nairn having the fifth best leap of 24-5 ½ (7.45) on his first and only attempt and Grand Bahamian Holland Martin taking the 10th spot with 23-6 ¾ (7.18m) on his second attempt.

“I felt good about it,” said Nairn as he prepares for the finale on Sunday at 3pm on the final day of competition. “We had a slight head wind, so I just wanted to come out here and qualify for the final.

“I feel really confident, just coming off the Commonwealth win. I’m extremely excited to be jumping in front of my family and the home crowd. I’m looking forward to winning it on Sunday.”

Martin, a Grand Bahamian native, said he wished that he would have done better, but he was satisfied with his effort, getting into the final.

“We had a slight head wind with some problems with all of our approaches, but we made a lot of adjustments,” Martin said. “I gladly made the adjustments in my last two attempts. Hopefully in the finals, it won’t be the same thing.”

The top qualifier was Jamaica’s Tajay Gayle with (7.83m) on his first attempt.

Shakeem Smith advanced to Sunday’s final at 3.35pm with the seventh best time of 50.55 with his fourth place in the first of two heats, but Andre Colebrooke just missed out in the second heat with fifth in 53.27 for ninth overall.

“I just came out here to execute and advance to the final,” Smith said. “The race was pretty smooth. Could have been way better but I hope to improve on it once we get in the final.”

In falling short of getting into the final, Colebrooke said he made some mistakes and he paid for it.

“I should have taken it out a little harder,” he said. “But, for next time, you will see me go much faster.”

CJ Allen of the USA had the fastest qualifying time of 48.76.

Also, Kinard Rolle was the lone Bahamian entered in the men’s 400m qualifying rounds. He placed third in the first heat in 47.86 for the seventh time to advance to Saturday’s final at 6:25pm. Alonzo Russell didn’t start in heat two.

The fastest qualifier was Christopher Taylor in 45.50 just ahead of compatriot Nathon Allen in 45.85.

“It’s good to make it to the final on home soil. Thank God for that,” Rolle said. “Thank everyone for coming out here to support me this morning, even though it was early. I appreciate that.”

The three-day meet was officially opened by Prime Minister Philip ‘Brave’ Davis. Also in attendance were Minister of Youth, Sports and Culture Mario Bowleg and Ginger Moxey, the Minister for Grand Bahama, along with NACAC president Mike Sands and BAAA’s president Drumeco Archer.

Cruel Davis is no doubt thinking to himself:

"Why didn't my government put all of the foreign athletes in the run-down Grand Lucayan Hotel and our Bahamian athletes in a much more palatial hotel? After all, our athletes should be getting every advantage and edge that we can possibly give them as the home team."