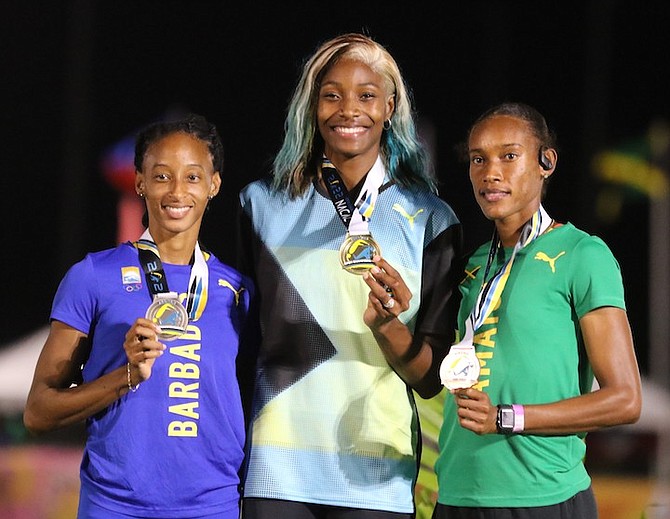 Devynne Charlton leaning at the tape for her bronze medal with American gold medalist Alaysha Johnson and Jamaica's Megan Tapper.

FREEPORT, Grand Bahama - There was a record setting gold medal performance to go along with a pair of bronze medals for Team Bahamas as the 2022 North American, Central American and Caribbean’s Anita Doherty Championships sizzled in the heat on day two at the Grand Bahama Sports Complex.

Leading the parade of medalists was Shaunae Miller-Uibo, who added one of the two medals missing from her collection – a NACAC gold – to her resumé after Devynne Charlton picked up the host country’s first medal in the women’s 100m hurdles, while Grand Bahamian Donald Thomas settled for the bronze in the men’s high jump in his return home.

“It’s the end of the season, so I just wanted to come out here and have some fun,” said Miller-Uibo, who pulled away from the field for the victory in 49.40 seconds to erase the championship record of 50.82 that was set by American Courtney Okolo in 2015 in San Juan, Costa Rica.

Donald Thomas clearing the bar in the men's high jump as Shaun Miller Jr looks on.

Donald Thomas with the Bahamian flag.

Miller-Uibo, 28, has now achieved a 400m medal at every major international competition, including the Olympic Games, World Championships, World Indoors, Commonwealth Games, Diamond League, World Under-20 and Under-18 as well as Carifta Games.

The only medal missing is the Pan American Games, but to her credit, she joined her team-mates Rashan Brown, Katrina Seymour and Katarina Smith in snatching a bronze in the women’s 4 x 400m relay at the Pan Am Junior Championships in Trinidad & Tobago in 2009.

Charlton, the World Indoor and Commonwealth Games silver medalist, added a third medal to her collection for the year when she secured the bronze in the final of the women’s 100 metres hurdles, running 12.71 seconds.

She trailed American gold medalist Alaysha Johnson, who won in 12.62 with Jamaica’s Megan Tapper picking up the bronze in 12.68.

“I felt pretty good. The first part of my race was about execution,” Charlton said. “Yesterday, I think I clipped the hurdle down the line and I paid for it towards the end. But I still held my composure. I was proud of myself for just staying on my feet and going through the line.”

Despite doctors orders not to compete because of a slight injury, Thomas delighted his hometown crowd with a leap of 7-4 ½ (2.25m) for the bronze. He lost on the countback on the same height to Cuba’s gold medalist Luis Enrique Zayas and Canada’s silver medalist Django Lovett.

“It felt good,” Thomas said. “This is home, so I wanted to come home and represented the Bahamian people to the best of my abilities. I fell a little short, but I will take it.”

Shaun Miller Jr, the other Bahamian in the final, had to settle for sixth with 7-2 1/4 (2.19m) as he watched his big sister Miller-Uibo clinch the gold in her season-ending performance in the women’s 400m.

“My performance was good in my first senior meet,” said Strachan, who is coming off a bronze medal performance at the World Under-20 Championships in Cali, Colombia. “Next season, I’m expecting some big things.”

Xavier Coakley placed seventh in the final of the men’s 110m hurdles in 13.85 as Americans Freddie Crittenden (13.00) and Jamal Britt (13.08) got the gold and silver with Jamaica’s Orlando Bennett getting the bronze in 13.18.

“First of all, I want to thank God for allowing me to get through the race,” Coakley said. “I’ve been battling with injuries all season long. This is the first day of my anniversary since I had surgery last year, so I was just pleased to get out there and compete.”

And Kinard Rolle placed sixth in the men’s 400m final in 48.23. Jamaica got the gold from Christopher Taylor in 44.63 and the silver from Nathon Allen in 45.04, while American Bryce Deadmon claimed the bronze in 45.06.

“I was not that pleased with the results,” Rolle said. “I executed the first part of the race, but I let the second part get away from me.”

All three Bahamian sprinters failed to move on in their semi-final heats of the 100m.

Anthonique Strachan, coming back from an injury she sustained at the World Championships, got edged out of a lane in the final after she placed fourth in 11.48 for ninth overall. Printassia Johnson, the other Bahamian entered, ending up sixth in her heat in 11.66 for 11th overall.

Jamaican Shericka Jackson, the second fastest woman this year, took the top qualifying spot in 11.98. She came back in the final and lowered the championship record to 10.83 with American Celera Barnes getting the silver in 11.10 ahead of Jamaica’s Natasha Morrison in 11.11 for the bronze.

“It wasn’t a great executed race because I’m still a little scared of my leg,” Strachan said. “I just got hurt at World’s and that was about three weeks ago. I got a quad injury. It was third degree strain and I sort of rushed it to come back and compete at NACAC.

“With the meet being at home especially with it being in Freeport, I sort of rushed through my recovery to come back. It wasn’t as bad as I thought. It was more mental.”

Johnson said she felt she ran a good race, but her focus was just on the completion of her phases.

As a precautionary measure to avoid any injury, Samson Colebrooke had to settle for 22nd overall in the men’s 100m after he got seventh in his heat. Ackeem Blake, the winner of the heat, was the fastest qualifier in 11.14.

“The plan was just to come in and see how we were doing,” Colebrooke said. “There was a lot of hiccups during the season. Me and my coach were just trying to get things together to come home. I didn’t want to leave. I just wanted to come home and see how I would do.”

Battling an injury all season, Colebrooke said he felt a little tight and, with it being so humid, he didn’t want to suffer any further damage to his leg.