DEVASTATION in Abaco after Hurricane Dorian. (NOAA via AP)

NEARLY three years after the passing of Hurricane Dorian some victims are still trying to regain a sense of normalcy after surviving the monster storm.

THE BOOTLE family have told of the trials they faced during Hurricane Dorian - and the struggle to adjust to get back to normal.

Joanna Bootle, a resident of Murphy Town, Abaco, said even after she and her family moved back into her home in 2020, she still gets anxiety, prays during the hurricane season and when the weather gets bad.

“Since then, we had anxiety we had to deal with and pray about. You know the anxiety attacks, sometimes if the weather gets bad and sometimes during the hurricane season, like now, you kinda get on edge, praying that we don’t receive any storms or what not,” said Mrs Bootle.

Mrs Bootle, who was with her husband and son during the hurricane, said after sustaining physical damage all over her body from the destruction of 80 percent of the windows in her home, the journey back to normal was not easy.

“Because we lost 80 percent of our windows, the storm came through the house and as a result of us moving our window, I was injured in the process, I sustained multiple lacerations about the body and we fled from our home and we went to a neighbour’s and that’s where we rode out the first half of the storm,” Mrs Bootle said.

Hurricane Dorian tore through Abaco on September 1 and 2, leaving devastation and death in its path. Mrs Bootle was lucky to escape its wrath and noted that September 2 is her birthday.

“I was taken to the clinic in Marsh Harbour where they administered medical attention for the lacerations. Then we came out that day, we could not believe our eyes it appeared that an atomic bomb, in my opinion, had dropped in on the island,” Mrs Bootle said. 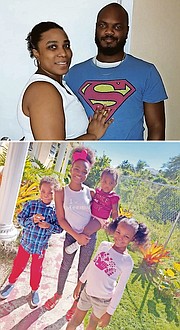 EDWARD ARMBRISTER, top right, and his family, who said his family still shudders at the thought of Hurricane Dorian.

Similarly, Edward Armbrister, from Dundas Town, Abaco, who moved to the capital with his five-month pregnant wife and three children after surviving the hurricane said his family still shudders at the thought of Hurricane Dorian.

“The kids, anytime it starts raining or there’s lightning, they would start crying and they can’t sleep in their room by themselves and that only just recently stopped. For a while we got the majority of our help from strangers, so we were bouncing around from place to place, not sure where we were going to end up,” he said.

He said as the family searched for a place to live and he looked for a job, he was faced with inflated rent prices.

“On top of that nobody wanted kids in their place, so that was a huge problem for us. And on top of that I still couldn’t find a job or vehicle or anything. The stuff that we are able to get over here had mildew and stuff so we had to throw them away.”

He added, “And on top of all of that, two of my kids have sickle cell, so that was a huge concern with them getting sick throughout the whole thing, because there was no help and my wife couldn’t really help too much, because she was pregnant.”

Mr Armbrister said he was not prepared for the level of impact the hurricane had on the island.

“The apartment that we were in, when the wind started to pick up, the water started coming underneath the door and started to flood the house. The bathroom and kitchen roof came off and the middle beam through the apartment started moving like waves in the ocean,” Mr Armbrister said.

He said, at the time, he prayed for his windows to shatter as he covered his children’s heads with a sheet and held them in the bedroom.

“What I had to do was put the kids in the bed and put a sheet over their head because the windows were starting to bow in and out, so I prayed that they were going to shatter. Then all the sheetrock started to fall in,” he said.

“We weren’t able to get out even if we wanted to, because the wind was blowing so hard, you couldn’t push the doors open and that’s when the tornadoes started and I saw my car get curved into a U.”

Mr Armbrister said he and his family also sought shelter from a neighbour after the eye of the storm had passed over the island.

“After the eye passed and everything calmed down, everybody got out of the house.

We ran to a neighbour’s house that didn’t have as much damage and we had to stay in there for like a day and a half, until the winds died down,” he said.

Mr Armbrister said after leaving the neighbour’s home, due to the large number of families taking shelter there, he and his family went to a shopping complex, where they took shelter for three more days.

“My daughter almost drowned when we were trying to get there, because the water was kind of high. Everyday we would have to go out and look for food and stuff inside the food stores, because all the food stores were destroyed, food was like all over the ground.”

Mr Armbrister added, “Me and another guy went around sucking gas out of damaged vehicles, because he had a truck. I think we were driving around for an hour taking gaskets off cars to put gas inside the truck and then that same day we drove down to Sandy Point. It took us a while, because every place was flooded. Once we got there, we had to sleep outside one day, then the second day we were able to get on one of the flights.”

Another Dorian victim from Abaco, Terry Joe Price, called her experience three years ago, as “horrific and tragic”. Ms Price said she and her son went to a shelter the night before the hurricane passed the island.

“It was horrifying just riding out the storm, September 1, that day. It was horrible and we stayed at the primary school in Marsh Harbour. Things were just flying about and we heard the rampaging and raging of the wind and it was so horrific and tragic.”

Ms Price said the roof in the classroom where she, her son and 16 others stayed started shaking after the passing of a tornado and everyone in that classroom had to run to another classroom which also got compromised.

“I remember the guys in the classroom had to put chairs at the teacher’s desk to keep the door from flying open. It felt like five hours of that, but it was probably 40 minutes.”

After escaping the school shelter, Ms Price said she and her son went to Marsh Harbour Government Complex for additional shelter and support, before heading to the capital after the passing of the storm.

Ms Price said although she and her son were able to return to Abaco a year later to rebuild, she still has flashbacks where she is back in the classroom with her son and 16 others.

“But I still have flashbacks thinking about that tragic day. What happened will live on forever.”

Ms Price said the slogan “Abaco Strong” kept her positive throughout her experience, rebuilding from the effects of Hurricane Dorian.

“Abaconians are resilient people. Just coping and going back to work and seeing the island build back up and it was so good to see persons out of Nassau coming back. Persons from Grand Bahama were also coming here to get jobs. That was a little help to know that Abaco is on the move and going to do this, Abaco Strong. Thank you Lord. Thank you,” Ms Price said.

A Hurricane Dorian Memorial Week is scheduled to take place from August 26 to September 4 under the theme “The Courage to Rebuild.”

The week-long events will observe the third anniversary of Hurricane Dorian making landfall in The Bahamas which caused damage to Abaco and Grand Bahama.

Were any lessons learned by our government visionaries?

Sadly, not likely. In spite of the government, ABACO AND ITS PEOPLE ARE STRONG!

The concert alone will tell you the gov hasn't learned anything

No - all of the donated relief gifts were collected together by government and shipped to Nassau, never to be heard of again.