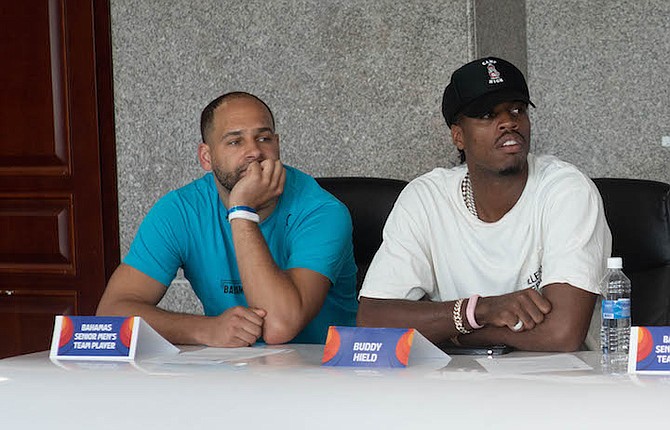 After a lengthy process of elimination from the training camp, the Bahamas Basketball Federation released the names of the 12 players selected to represent the Bahamas tonight at the Kendal GL Issacs Gymnasium against Venezuela.

The two teams are playing in the first game of the fourth window of the FIBA 2023 World Cup Qualifier.

Looking at the make-up of the team, Johnson said the coaching staff has assembled a very cohesive unit and that will be one of their strengths. “We have added Kai Jones, who will certainly help out on the boards, along with Kadeem Coleby,” said Johnson.

“That was one of our downfalls in our game played and I think we have addressed that issue so you should see a much better game from Team Bahamas.”

Venezuela just arrived in town yesterday and the coaching staff didn’t get to size them up, but Moses said it’s not a concern because their focus is on the 12 players the Bahamas will put on the court, led by Hield and Jones in their quest to win.

“We’re not concerned about Venezuela until they step on the court,” Johnson said.

Before finally submitting the team roster to the technical meeting last night, Johnson said they had left the door open for Deandre Ayton, the third Bahamian currently playing in the NBA for the Phoenix Suns, along with Hield from the Pacers and Jones from the Hornets.

But Johnson said they could only “wait” for so long, so they had to complete the roster without Ayton.

“We feel that whenever he’s ready to play with the team again, he will come out,” Johnson said.

“We have a game to play and without or without him, we will play. We are concentrating on putting the best team out there to win.”

Tonight’s game will get started at 8pm.

Following the game, Team Bahamas will travel to Argentina to play their second game in this window on Monday night.

All of the players are expected to travel with the exception of Burrows, who will be replaced by Bradley Nairn, who is currently playing in the NBA’s G-League with the Stockton Kings.