FACE TO FACE: A humble start and a steady climb 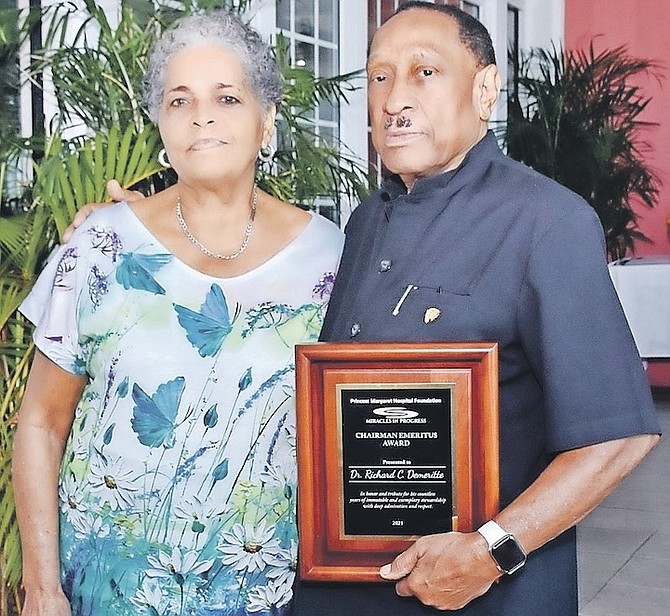 RUTH & Richard Demeritte, who have been married 56 years.

HE had at his disposal some of the most auspicious mentors one could ask for. He came from humble beginnings, but lived in a loving home. His steady climb to success has not been easy, but it proves what can happen when diligence and tenacity combine. Richard C Demeritte is an accomplished accountant, noted diplomat, and loving father. As he recently became the chairman emeritus of the Princess Margaret Hospital Foundation, he reflected on his life thus far - one that represents a steady path for others to follow.

He is known for a big, bright smile and a distinguished demeanor. But there’s something more powerful at work. Richard has a slate of achievements that have propelled him to the top of his career. He has sown seeds that have born fruit locally and internationally and today, at the age of 83, he is still going strong, always finding new ways to make a difference in the lives of others. 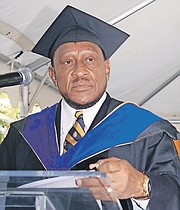 RICHARD Demeritte speaks at the commencement address at the graduation ceremony of McHari college where he obtained his PHD.

The son of Harcourt and Meriam Demeritte, Richard was the only son of their four children. He grew up on St James Road, which is located off Shirley Street before approaching Kemp Road. In this neighbourhood, the basic amenities were absent and crime was unrestrained. But even then, Richard learned a valuable lesson inside the home - he may live in the ghetto, but the ghetto is not in him.

“There is not much glory in it, but there is no greater place of ministry, position or power than that of a mother – and I had an extraordinary mother,” Richard says.

“She was born in Andros, the daughter of Captain Joe Whitfield. She was no nonsense and incredibly loving. My father was strict and the strongest man I’ve ever known. He was the architect of our family unit. He was a true partner to my mother in every sense of the word and together they instilled in me and my siblings the essential truths of life. They taught us how to be good citizens of The Bahamas and to be good human beings, putting our love of and faith and God first and foremost in our lives; being honourable and trustworthy; dependable and always demonstrating impeccable manners and respecting our elders – so that no one could brainwash us with lies and half-truths.”

TINA, Ruth, Richard and Indira Demeritte when his two daughters were called to the bar at the same time.

St James Road was full of distinguished families, and they worked together as a community to set standards for their children.

“We were enclosed and never really travelled much around Nassau so when I moved out of that community it was like going out into a new world,” he recalls.

“I was already prepared for it because of the molding I received from my parents and extended community.”

That solid home training led him to heights in his educational quest as he grew, and undoubtedly helped to shape the diplomat he became. The young Richard was enrolled in Eastern Jr and Eastern Sr schools before he went on to DW Davis Senior High. His life as an accountant began at JT Mills, The Bahamas School of Commerce. In those days, all the Bahamian accountants started out there. He also had the fortune of attending evening school at the home of Sir Carlton Francis who was headmaster for DW Davis at the time. Former Minister of Education Sir Livingston Coakley began exposing students interested in book keeping through evening classes at JT Mills and thus, the spark was lit in the mind of a young man destined for greatness.

THE EMBASSY of The Bahamas, Bahamas House, taken in London when the embassy officially opened. Pictured are Sir Clement Maynard, Sir Lynden Pindling, officers of the Royal Bahamas Police Force, and Basil O’Brien (permanent secretary at ministry of foreign affairs).

After schooling in New Providence, Richard’s world was about to open up much farther than the limits of his stomping grounds on St James Road. He was accepted into the Metropolitan College in the United Kingdom, where he started professional book-keeping classes and became a student of the Association of International Accountants (London). This is where his love for the professional side of accounts was born.

It was his dream to become a member of that organisation. Many years later, when he became the High Commissioner to London for The Bahamas, he qualified for that process. A simple lesson in never giving up on your dreams. While in London, now in the seat of diplomacy, Richard was approached by the Association for International Accountants to attend their meetings. His wealth of knowledge and his wisdom led to his selection as chairman and president of that global body. Historically, he became the only non-English member to be granted that opportunity at the time. He served as president from November 1, 1985 for a three-year term, and simultaneously served as Chairman of the Council during this period. He continued to sit as a member of the Council from 1984 to 2014.

Richard’s very first job was at the Public Treasury of The Bahamas, where he began working in 1956. His commitment and skill did not go unnoticed. By 1967, he was tasked with moving to Grand Bahama to establish a branch of the Public Treasury there. Once again, Richard set his sights on a lofty goal. He wanted to become Auditor General for his country. He achieved this goal and was appointed Auditor General in 1980. The Auditor General’s role is to audit the finances and activities of the Government of The Commonwealth of the Bahamas. In undertaking this task, the Auditor General scrutinises the public sector for potential instances of wastage, inefficiency or ineffectiveness, and reports the findings to Parliament. Independence is the cornerstone of public sector audit. The Auditor General must be free from pressure, influence or interference from any source that may erode that independence. This post gave Richard the opportunity to serve his fellow citizens in a way that would benefit the masses.

The field of accounting, Richard says, is one that touches every other field: “If you don’t have some knowledge of accounting, you cannot become outstanding in your business life. This translates into general governance as well. It teaches you discipline and being able to prioritize items for the betterment of the company in a logical manner. I used this as a fundamental rule in my tenure as Auditor General, among others, auditing the financial report on the finances of the Government of The Bahamas.”

Later on, a new career unfolded for him. As a boy, Richard loved diplomacy and was introduced to it personally by Sir Gerald Cash, Carl Francis and Paul Adderley, Arthur Hanna and Sir Lynden Pindling who were all his closest mentors. This fine cadre of distinguished gentlemen literally shaped the history of The Bahamas. Richard had the fortune of sitting at their feet and taking on their spirit of excellence, patriotism and commitment to serving their fellow man.

“I took the lessons that I learned from my mentors and my parents and went on to become High Commissioner to the United Kingdom and concurrent ambassador to the Federal Republic of Germany, France, the Kingdom of Belgium and the European Economic Community,” he shared.

The Bahamas High Commission in London provides local, national and worldwide information on their services to all commercial, industrial and tourist orientated activities directed to The Bahamas. In addition, Ambassadors assist our compatriots and offer them the local representation and provide visa applications services and other consular functions. As the personal envoy of the Government of The Bahamas to the Court of St James and other European countries, the High Commissioner informs the Bahamas Government of what is going on in the United Kingdom and Europe; negotiates on The Bahamas’s behalf; watches over the development of bilateral relations in all fields, and ensures the protection of the interests of The Bahamas and nationals in the United Kingdom and Europe.

His wealth of experiences are chronicled in three books that he has authored: The Consummate Diplomat – which depicts his diplomatic career; Leadership Accountability in Government – which dealt with his 30 years in Government; and The Nature and Dynamics of Family Life – which portrays his lessons as a son, husband, father and grandfather.

During an awards ceremony last month, Dr Kenneth Kemp received the PMH Foundation’s Chairman’s Award after offering more than a decade of dedicated service to the foundation. He, along with Diane Pindling, both received this award for the past three years, as they have both served as co-vice chairs for the foundation.

“In this new role as chairman emeritus, I have been able to grant an opportunity for a younger generation of leaders to stand and steer the ship that Myles Munroe and I have held for the past 20 years,” Richard said.

“They can do so with me alongside, offering advice and assistance in guiding them along the way drawing on my extensive experience. It’s the best way to move the organisation forward and ensure its continued success. You have to encourage young people to contribute their time and effort to helping others. That’s how society flourishes and helping our citizens through our only public hospital has been a great joy in my life. I’d like to see the PMH Foundation expand to include the Family Islands and we have begun making inroads in that regard already.”

Of all his accomplishments, Richard is most proud of being a husband and father. He has been married to Ruth Demeritte (nee Smith) for 56 years. They had three children. However, tragedy struck when their son Ricky N Demeritte was murdered in 1992. He was one of the founders of RND Cinemas, and it was named in his honour. Their two daughters - Tina Roye and Indira Francis - are both attorneys at law. Richard is also the proud grandfather of six grandchildren, four girls and two boys. Two of them are matriculating in accounting and one in law.

Richard mused: “They, and the hundreds of men and women that I’ve mentored throughout my life, are my greatest legacy and my greatest source of pride.”

The Demerittes postponed their wedding by one week because the weekend they were supposed to be married, in 1966, Queen Elizabeth visited The Bahamas. When he met the Queen in 1984 as he presented credentials as High Commissioner, she had a great laugh about it.