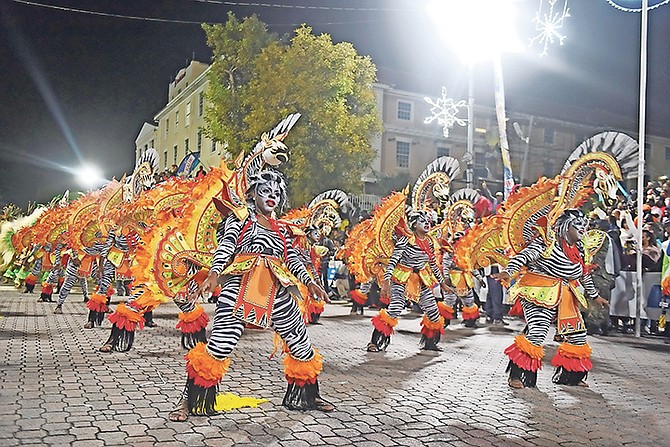 TICKETS for prime Junkanoo seating in Rawson Square are selling fast as anticipation builds for the return of the country’s premier cultural expression.

Seventy-four percent of those purchases have been made online.

Mr Davis explained the most desired seating sections such as Rawson Square and Scotiabank areas were quickly being filled.

“Those are the most desired tickets, there are still some tickets but there are not a whole lot together,” he said.

Tickets can be purchased through the ‘Aliv events’ app which Mr Davis described as an “interactive” app which would allow people to watch the Junkanoo parades live, send comments, and be fully engaged with the event.

Mr Davis acknowledged that there were some technical glitches with the app over the weekend, however he said those issues have been resolved.

“We have resolved those; the technical glitches are resolved. I think most of the issues we have now are more user because we have put in an extra layer of security because you use your debit credit card.

“I think what happens is that when you sign up, you need to get a verification email and in the email is also your password or when you reset the password. So, I think it’s more of the uptick in the knowledge rather than the functionality of the app,” he said.

Mr Davis also told this newspaper officials were still in discussion with Apple about the Aliv app being available for iPhone users, noting he hoped the matter would be resolved shortly.

“I can’t say enough how disappointed and upset I am that we’re not able to get the app in the Apple store but we’re still actively working on that,” he said.

However, Mr Davis pointed out that the usage of the app is an opportunity to “modernise” ticket purchasing for the Junkanoo parades, saying this year’s parades will be the first automated one’s ever.

“We (Aliv) wanted to modernise Junkanoo Corporation of New Providence (JCNP) ticket purchasing. It’s important to note that Aliv is not making any commission or any money off ticket sales. All funds received will go 100 percent to the JCNP.”

He added: “We want everyone to download the app, once we do the Apple (version) as well and remember it’s an interactive app. We have a lot of surprises that’s going to come up, they haven’t seen everything yet that we’re going to do. So, we want you to download the app if you’re not able to make it to Junkanoo you can watch it online.

“Then the JCNP is going to send updates if it’s going to rain or if it’s windy. So, we want to be interactive with that, of course, there’s some other surprises that we’re working on as well. So, I think it’s going to be fun. This is going to be the first automated parade ever.”

There are an estimated 6,400 tickets available for sale for both parades.