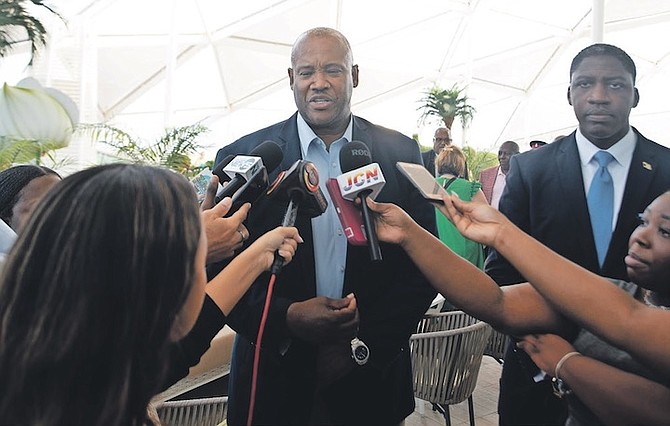 ENVIRONMENT and Natural Resources Minister Vaughn Miller yesterday said he is in conversation with cruise lines about the issue of pollution in Bahamian waters. If necessary, he said, the government will use the “maximum extent of the law” to deal with the issue.

“We’ve had extensive conversations with some cruise lines that I am not at liberty to mention, to let them know how serious we take this and there’s some matters we’re dealing with privately that we will take it to the maximum extent that the law will provide us to enact upon them. So we take it really seriously,” Mr Miller said.

He spoke to reporters at an event on board a cruise ship yesterday.

The Tribune had previously reported that a US court mandated report in 2019 found Carnival ships dumped hundreds of thousands of gallons of treated sewerage and more than 8,000 gallons of food waste in Bahamian waters in 2017. In doing so, the court found Carnival violated the International Convention for the Prevention of Pollution from Ships (MARPOL) which specifies how food waste and sewage must be disposed.

The Ministry of Transport and Local Government had previously said it found the allegations disturbing and that the Port Department and the Bahamas Maritime Authority would investigate the allegations. Yet, the outcome of the investigation has not been made public.

In March, Carnival Cruise Line President Christine Duffy said the corporation’s “number one priority” is compliance and care for the environment.

When The Tribune asked Ms Duffy at the time if Carnival Cruise Line accepts possible sanctions and what the company would do in the future to improve, she said the company is taking measures to take care of the environment.

“Our number one priority is compliance and care for the environment,” Ms Duffy said in March. “The work that we are doing, the investment we are making to ensure that we can operate sustainably as we have made investment on our newest ships with LNG technology and any lessons that we have learned we have incorporated into our commitments as we move forward to ensure that we keep everyone healthy, safe and, including the destinations that we bring our ships to.”

Earlier this year, Transport Minister Jobeth Coleby-Davis also spoke to the media about the government’s investigation into Carnival’s dumping in Bahamian waters.

“I was advised that the office had handed that investigation over to the DEPP (Department of Environmental Planning and Protection), who has to carry out and complete the environmental portion of that report, so that they can determine what sanctions would be placed on Carnival,” Mrs Coleby-Davis said at the time.

“And, so, I think the discussion now lies with the DEPP and the Office of the Attorney General to determine what the penalties will be as it relates to Carnival. So my office just did the investigation along with them because it falls under us when it’s those sorts of incidents, but as it relates to the environmental portion and the penalties, that would go to the DEPP.”