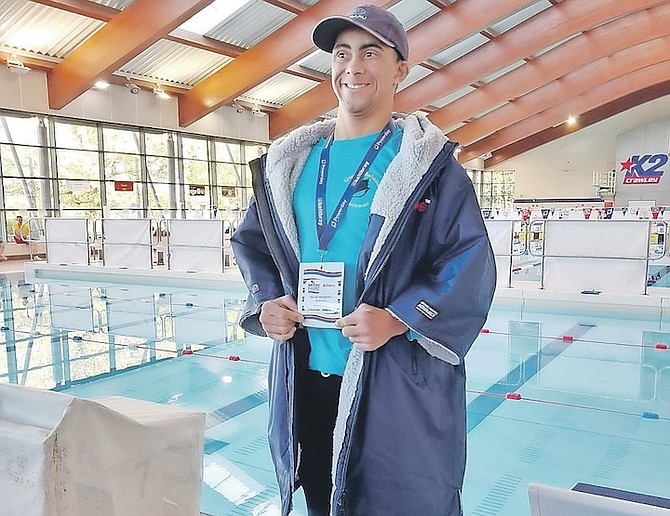 DORIAN Williams at the British Down Syndrome swimming championships.

A FORMER student of the Beacon School in Grand Bahama competed in the first British Down Syndrome swimming championships recently, taking the gold and silver medals in two events.

Dorian Williams, 21, was among the 130 athlete swimmers at the championships held at K2 Crawley from November 19 to 20. The inaugural event was open to all British swimmers with Down Syndrome.

Katrina Hodge, a retired Grand Bahama educator, relocated to the UK with her son. She said Dorian has set his focus on qualifying to compete in the Special Olympics in 2023, and hopefully the Paralympic Games.

Additionally, he placed among the top swimmers, she said, in his other races of the 50 metres and 100 metres backstroke, breaststroke and freestyle.

“He has ambitions to improve his times and hopefully participate in the Special Olympics Games and Paralympic Games,” Ms Hodge said.

While residing in Grand Bahama, Ms Hodge taught at the Jack Hayward High School. Dorian attended the Beacon School and had participated in the swim programme at the YMCA for many years.

“Dorian had trained for many years with the YMCA wave runners in Grand Bahama, and so he had a great swimming background. They were inclusive and always encouraging,” she recalled.

Upon her retirement from teaching, she decided to relocate to the UK so that her son could have an opportunity to further his education.

“It was not possible on Grand Bahama at present,” she explained. “We are still waiting for a placement and hope it will be possible in the future.”

Ms Hodge said that they are not letting Down Syndrome (Trisomy 21) deter them from setting their goals high.

Wende Hanna, president of the Grand Bahama Down Syndrome Society, said Dorian, and indeed, Dorian’s mother, are truly an inspiration.

“As a parent of a child with special needs, I can appreciate, admire and emulate the commitment, tenacity and encouragement that propelled Dorian to this level of performance,” she said.

“Dorian trained with typically developing kids and I am sure his coaches and fellow swimmers are super proud to see him excel in this way.”

Mrs Hanna believes that Dorian’s story illustrates why it is so important for differently abled children to be included in all manner of activities.

“Dorian benefitted, but I know his fellow swimmers benefitted as well as they were able to support Dorian to overcome his challenges to become a champion. I encourage all coaches to welcome our special needs children if they have an interest in a particular sporting discipline.

“Yes, they require special accommodations, more attention and more time, but there is a champion in all of us, if we only take the time to find it,” she said.

The two-day BDSS championships held in Crawley, Surry, in the UK, featured athletes from novice to elite, aged between 10 to 50 across 44 events.

According to Swim England North East website, the aim of launching the BDSS Championships is to bring awareness to Down Syndrome swimming as a sport, recruit new talent by finding the best swimmers for the Great Britain team, and call for the Paralympics to change their rules and open a DS category to ensure a level playing field.

At present, there is no specific category for swimmers with Down Syndrome, meaning they have to compete as intellectually disadvantaged athletes in the S14 category.

The organisation indicated that a new category for these swimmers would also recognise their physical impairments, giving them a fairer opportunity to compete on the World and Paralympic stage.

Down Syndrome is a genetic condition which typically affects someone’s learning abilities and physical features. Usually, cells contain 46 chromosomes. But Down Syndrome happens when all or some of the cells in a person’s body have 47 chromosomes due an extra copy of chromosome 21.