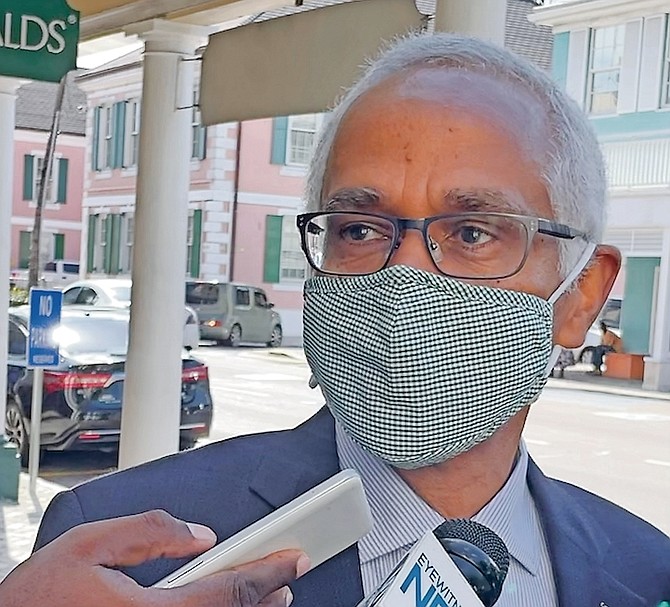 • Auditor General shows ‘not a penny is missing’

Dionisio D’Aguilar, reacting to the report by the Government’s financial watchdog, told Tribune Business that while the system was “not perfect” it had served to facilitate tourism’s safe re-opening and that of the wider economy while contributing a net $10m surplus to assist the fight against COVID while he was in office.

The Auditor General’s Office, while hailing the Minnis administration’s decision to launch the Health Travel Visa, raised concerns about a lack of competitive tendering; government payment procedures not being followed; delays in transferring funds to the Public Treasury; and the “critical” need for the Government to gain more “control over its own revenue collection”.

But the report, which was tabled in the House of Assembly yesterday, fell well short of providing the Davis administration - which had frequently blasted the Health Travel Visa while in Opposition and called for it to be abolished - with any major ammunition to use on further attacks against its predecessor.

Challenging critics to “name one government agency that processes 90,000 people per month”, as the Health Travel Visa did during his final ten months as minister, Mr D’Aguilar pointed out that the initiative had created a near-$10m windfall for the Government with revenues of $34.442m exceeding total expenses of $24.858m.

And visitors/tourists accounted for 82.8 percent, or $28.51m, of that revenue, which Mr D’Aguilar said showed that the Health Travel Visa’s financial burden fell largely on overseas nationals as opposed to Bahamians. Locals, including residents, paid a collective $5.928m or just 17.02 percent of the total in the ten months between November 2020 and August 2021.

The former minister said the Auditor General’s findings also showed that the Progressive Liberal Party’s (PLP) targeting of Kanoo, the digital provider that processes Health Travel Visa payments on the Government’s behalf, had no merit.

Kanoo’s $456,993 total fee for the ten months to August 2021, according to the report, was equivalent to just 1.3 percent of total revenues and 1.8 percent of all Health Travel Visa expenses. The latter paled against the $16.783m paid to CG Atlantic Insurance, the health insurance provider, which accounted for 67.5 percent - or over two-thirds - of expenses.

“From a macro point of view, the Health Travel Visa was tremendously successful in achieving the goal it was intended to achieve,” Mr D’Aguilar told Tribune Business. “It was to open up the borders and allow visitors to come into the country and provide a mechanism by which persons could be tested and their COVID-19 status ascertained before they arrived.

“In a very short period of time, five to six weeks, we had to develop an online portal that allowed persons to apply and get a very speedy response. There had to be no paper, very little human interaction and a very quick response. We had to compete with other destinations.

“While requiring a Health Travel Visa, we had to make the process as seamless and efficient as possible and it may be that, coming out of the gate in November 2020, there were a few bumps in the road but, by and large, it worked really well. In the ten months that I was minster of tourism, we processed over 900,000 applications.”

Some 77.8 percent of those applications, or 704,868, were visitors while the remaining 22.3 percent or 201,303 were Bahamians and residents returning home from abroad. Mr D’Aguilar conceded that the overriding imperative to re-open tourism, and get the Bahamian economy moving again, may have meant resulted in some procedures not being followed but argued that any infractions were minor and done for the greater good.

“The reason why Kanoo was selected, I can tell you, is because the local programmer we were using, Think Simple, as we drew nearer to the November 1 launch and figured out we needed to charge a fee..... we only made a decision to charge for this visa on October 15, 2020,” Mr D’Aguilar explained.

“You’re ten days out from taking the portal live. If people were coming in on November 1, we had to open the portal five to six days before we pulled the trigger on this visa. We had to figure out how do we get this to work, and their [Think Simple] suggestion was that we needed an online payments provider to be the link between the online portal and getting physical cash.”

While the Auditor General’s Office flagged concerns that it was Kanoo, and not the Government, paying other Health Travel Visa participants what they were due from the fees collected, Mr D’Aguilar said he had received legal advice that the law allowed him to enter into such contracts (see other article on Page 1B).

As for concerns that the Health Travel Visa fees were not being paid to the Public Treasury on a timely basis, Mr D’Aguilar conceded that this had been the case when the initiative started because the Ministry of Tourism and its private sector partners were “focused on the front end” and ensuring the customer experience was as smooth as possible.

“Once we got that under control we focused on the accounting, the back end, and by mid-2021 the payments were going to the Treasury on a timely and regular basis,” the former minister added. “We took some time to catch up. We were a couple of months behind. It was a brand new program. We had to figure out how to make it work. We created it from scratch.

“The point is no money went missing. Was it slow getting to the Treasury? Yes, but they [the Auditor General’s Office] never said a penny was missing. It was all properly accounted for. They couldn’t find any missing money. And all that noise about Kanoo... I could never understand it.”

The Auditor General’s report referred to a $62,471 “discrepancy” or understatement of revenues, which it said could potentially represent some 2,000 visitors. Mr D’Aguilar blamed this on system “misclassifications” during the Health Travel Visa’s initial stages, with some visitors staying longer than five days being charged a $40 fee instead of the required $60.

“Any time you develop from scratch a system that generates $34m, and have six to seven weeks to do it, it’s not going to be perfect coming out of the gate,” he reiterated. “But we caught up, and not a cent was missing. Money was secure, and every month now it gets handed to the Treasury.

“I don’t lose money. Dionisio D’Aguilar does not lose money. I was told to make it self-funding, and there was a $1m per month surplus because revenues exceed expenses.” Mr D’Aguilar said then Health Travel Visa’s value was shown by the fact that the Davis administration had retained it, although Bahamians and residents are now exempt from paying fees.

“You name me one government agency that processes 90,000 persons a month. It worked bloody well,” he told Tribune Business. “Now you get a response in two to three hours or less.

“It was very important to put it in the hands of the Ministry of Tourism because they understand the importance more than most of getting this right. We couldn’t have people waiting three to four days for a response.”

What, nobody willing to cast any stones? Neither condemn I thee. Go and sin no more.

Who the hell let this most disgraceful little white-haired yapping poodle off of its leash?!

Notice how de former minister Dionisio D’Aguilar, conveniently bypassed de auditor general's raising long list of other concerns, including, amongst others, de then minister's lack will to engage in competitive tendering, ― Yes?

Both Papa Hubert and I attended de 1967 Royal Commission of Inquiry into the Operation of the Business of Casinos in Freeport and in Nassau was held at de Carlton Hotel where we sat over days, witnessing the testimonies of politically powerful men's oral telling revealing and startling tales despite being sworn under oath, ― Yes?

this was criminal. The guardian reported that the software development company was introduced "by the minister". The company normally sets up concert lights, but I guess since no concerts were happening maybe they needed to make money. they knew the minister, got contracts for the failed food program software and when that wasnt sufficient, the made up health visa to capture data that already existed elsewhere.

Im convinced govt is able to pass off these bad designs because they know they're speaking to an audience who just doesnt understand. I couldn't believe it when I heard reported "they went to the digitization unit, but they didnt have programmers... to create a form"...

Both Papa Hubert and I in our much earlier years, attended de 1967 Royal Commission of Inquiry into the Operation of the Business of Casinos in Freeport and in Nassau was held at de Carlton Hotel where we sat over days, witnessing the testimonies of politically and society's powerful men's oral telling revealing and startling tales despite being sworn under oath. Most remembered was learn identity of de man was assigned to regularly drive around, dropping off Wallace Groves's envelopes and to whose offices and places of businesses.
And who could forget de testimony de man's who claimed be clueless as why an astonishing sum of money, somehow got deposited into his bank account, nor was he aware it had sat in his bank account for 7 months, that is not until de Commission brought it to his attention.
My days spent listening testimony at de Inquiry is probably de root for why I've often refenced de sins of Kelly Island,** because its de root of what still goes on, ― Yes?

Yes. Please ask that man or one of his apple don't fall far from the tree descendants to deposit some mysterious cash in my bank account. I promise not to notice for at least 2 months