DIANE PHILLIPS: The lighter side of soppy

VALENTINE’S Day came and went. Did you notice? No, neither did we. It was probably because it was on a Monday and a Monday that followed the Super Bowl no less. I mean, how much excitement can one body handle?

Lots of people overlooked Valentine’s Day this year being that it was on the first day of the work week after the biggest TV party of the year. Six hours of dazzling pre-game history before the event even kicked off. There was nothing like that leading up to Valentine’s Day, a few perfume ads maybe, not even anything seriously chocolatey. Certainly no lovers’ day ads that cost an average of $6.5 million for 30 seconds of viewing time. As for the youth target market for ‘be my valentine’, you’d have to sell a whole lot of Hershey’s Kisses to make up that kind of investment.

While that’s all lighthearted, there’s a serious economic side to Hallmark holidays, those days of the year set aside specifically to generate revenue unlike Christmas, Chanukah or Easter which have significant non-commercial reasons for existing even if they coincidentally bring in a lot of money.

It won’t be long now until it’s time to celebrate National Nurses Day, a holiday that pays tribute to a slew of men and women who deserve to be honoured, especially in the past two years. National Nurses’ Day was so popular Hallmark created its counterpart, National Doctors Day, a few years ago, though it does not appear to be generating the same enthusiastic response.

You’d think the digital divide would have separated traditional card giving from electronic, depowering the former with the ability to click a few keys and send a message, knowing it will be received on the right day and saying exactly what you wanted to say. So, it may come as a bit of a surprise to know that card giving, like hand-written letter-writing, is making a bit of a comeback. 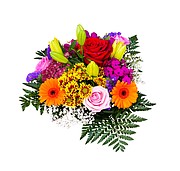 CARDS are one part of the equation of celebration. On Mother’s Day it’s all about the flowers.

Celebrating Valentine’s Day (or did I say failing to do so) triggered my curiosity about the subject of cards, exchanging, taking pictures for, writing messages in. Whenever I think of moving one day from the home we have occupied for more than 35 years, I wonder what I would do with the drawer filled with cards from my children from the days they were too tiny to have signed them on their own to when they were grown and continued to write loving messages that filled every available inch.

The number of cards we send to one another is astonishing. According to one report, Americans traded 144 million cards on a recent Valentine’s Day (not 2022 and not in our household as noted above).

What’s even more astounding is the mind-boggling choices. There were some 1,200 cards to choose from just for Valentine’s Day.

Whatever the formula, it is working for Hallmark which not only authored a whole lot of holidays that would not have otherwise existed – a fact worth digesting --- but grew the concept of sending a simple greeting into a $3.5 billion enterprise with 27,000 employees and enough funding to take it from public back into private in 2016. Imagine asking an accountant more than a hundred years ago to draw up a business plan predicated on expressing feelings on paper that you would go into a store and buy, then sign, stamp and send.

Cards are one part of the equation of celebration. On Mother’s Day it’s all about the flowers. On the holiday that Woodrow Wilson used his presidential pen to sign into law in the U.S. in 108 years ago, people spent an average of $196 per person for a total till of $25 billion, including $5.2 billion on jewellery. Or so CNN reported in 2019. I think some of those funds went to masks this year.

There is something to be said for cards that are soppy and flowers that are delivered, but they are no substitute for someone holding you tight, looking into your eyes and saying ‘I love you.’ That’s something that the best creatives at Hallmark will never be able to match, though Heaven knows they‘ll give it their best.

MR L PASSED AWAY on February 12. He was in his 80s and had battled heart disease and other issues for some time but had been lovingly cared for by his son who is a doctor, by his wife and by the nurses and caregivers around him.

Why cover Mr L’s death? Because he is like so many other Bahamian men who slide away leaving grown offspring behind who wonder if they did enough to show their love, to express their feelings, to make that parent’s life all that it could be.

Mr L was humble. He could lay block and bricks like an artisan.

He was willing to work as many jobs as it took to make sure his son, who grew up shadowing and admiring his work ethic, could realize a dream of his own, to become a doctor and heal others.

Mr L never wanted to stop working and only did so when his health would no longer let him perform even rudimentary tasks on the road.

Married twice, he had several children, including his son, the doctor.

At least two predeceased him and he took their deaths hard.

Toward the end, he seemed to lose the lust for life.

Maybe it was the pain or maybe he was just tired.

Why dwell on a man whose name will never be in a Who’s Who or a list of movers and shakers who shaped The Bahamas?

Because it is men just like him who did, in fact, make this country what it is.

Men who worked hard so their children could do better than they did.

Men who made a difference by setting an example of a work ethic, quiet men of strong character who did make a difference by raising children who grow up to make The Bahamas a better, safer, healthier place.

It is worth remembering all the Mr L’s whose sacrifices were not wasted, they were invested in those they left behind.