Ukraine crisis may see gas price at $6 a gallon 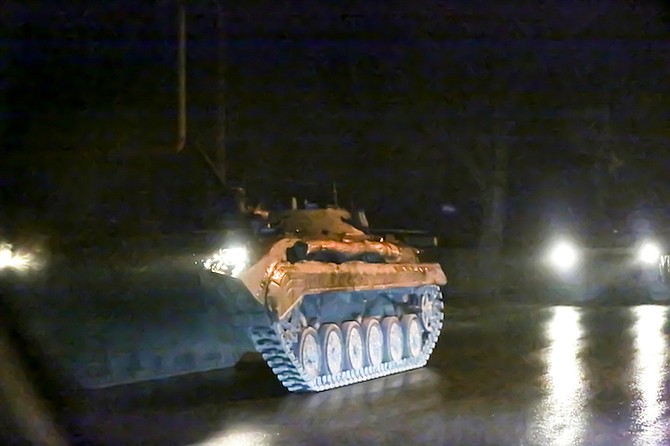 Bahamian consumers and businesses were yesterday warned to brace for gasoline prices to hit $6 per gallon next month after the Ukraine crisis sent oil prices soaring to seven-year highs.

Mr Bastian, also owner/operator of Esso’s East Street South and Soldier Road gas station, added that “if war breaks out” then oil prices could possibly go up by another 50 percent.

“Right now is a scary time for dealers,” he said. “Oil is going up but our margins are not going up. The dealers now have to spend more money on buying gasoline with our margins at the same place.

“We are between a rock and a hard place, but we are providing an essential commodity, so I guess the best thing we can do is reduce our purchase quantity to try to offset the damage to our dealers. Prices have already started to go up. Gasoline at Shell is already at $5.37 and, if we keep rates up like this, we will be at $6 per gallon within a month.”

Mr Bastian recommended that drivers and businesses prepare now for this scenario by filling their tanks to the maximum rather than getting $20 or less per day. He suggested this will help Bahamians conserving gasoline and incomes/purchasing power which are already coming under great strain from post-COVID inflationary pressures.

“Bahamians are resilient. We have been here before,” he added. “We have gas in reserves on the current prices, so we won’t see a dramatic rise in gasoline prices overnight. We have to sell-off the stock we have now within the next few weeks, but when the next shipment arrives, expect to see much higher gasoline prices.”

Crude oil prices reached more than $99 a barrel at one point yesterday in response to the decision by Vladimir Putin, the Russian president, to recognise the independence of two breakaway regions in eastern Ukraine and order in his military as “peacekeepers”.

Prices later slipped back slightly after markets viewed the initial sanctions response by western countries as weak, but crude oil prices - as measured by the Brent Index - ended the day 1.6 percent higher at just under $97 a barrel.

West Texas Intermediate (WTI) crude, the US benchmark and a yardstick more relevant to The Bahamas, jumped by more than 3 percent and touched a seven-year high on Tuesday as it peaked at $96. It ultimately closed at $93.30 a barrel.

Russia is a major energy producer, especially in oil and gas. Rupert Pinder, a Bahamian economist who lectures at the University of The Bahamas (UoB), told Tribune Business that the Ukraine situation’s on oil prices and energy costs threatens to worsen the effects of the widespread increase in prices that this nation’s consumers are already experiencing.

“The whole world is interdependent,” he explained. “The long and short of it is energy prices feed into everything. What we’ll have is an exacerbation of inflationary pressures. We’ve seen some inflationary pressures from COVID, and how that created disruption in the supply chain, and now we have a situation with oil prices.

“The main impact [from the Russia-Ukraine situation] is really in terms of energy, and for us we’re not an oil producing country, so certainly it’s going to have some inflationary impact.”

While rising oil prices will normally hike electricity costs, given that Bahamas Power & Light (BPL) relies on this as its sole fuel source, this impact may be mitigated - at least for the moment - by the utility’s fuel hedging strategy. The existing hedge, though, is due to expire in June 2022, but Pedro Rolle, BPL’s chairman, has indicated a desire to keep fuel hedging in place.

No household or sector of the economy will be spared by rising oil prices. Besides raising the price of airline tickets, and tourist costs to access The Bahamas, any surge induced by conflict in eastern Europe will impact the price of a host of construction materials and other goods that all include oil as an input.

Mr Pinder, though, said it was too early to determine the extent of any oil-price led inflation and how long it will last given that much has to play out concerning the Ukraine confrontation. “In terms of the long-term knock-on effect it’s safe to say it’s going to have some dampening but the overall effect is too early to predict because we don’t have enough sample points,” he added.

“My biggest concern is how this would impact in terms of the price of inputs for a country like The Bahamas which is fully dependent on imports. But in terms of the overall impact it’s still a little too early to determine the long-term effects.”

That means BPL gonna charge us $100 per month per light bulb.

Wait until all of the jabbed start having unexpected heart problems down the road, not to mention the sudden appearance of hair growth on the bottom of their feet. That should make 'em all deliriously happy. LOL

Very happy he is gone

You must be a sucker for punishment by Biden. LOL

Screw that, Bahamians are tired of being resilient.We are tired of financial pain. Good grief, man. Bad news upon bad news, everywhere you turn.

Snake is gonna be laughing all the way to the bank with the bigger fuel and gasoline margins he will tack on and be able to blame on Russia's impending full blown invasion of the Ukraine. LOL

Will people change what they do? NO! That's not enough to change the people habits, not one bit. More houses will be without power but the number of vehicles on the street will be the same, and just as frequent. Fast food and cell phone data sales will hold and the amount of people asleep and bored out of their minds looking to be distracted will remain the same. As things go from worst to worser, the people instead of changing what they do will resort to begging, but they will not change what they do.

With Trump we had 4 years of peace and low energy prices. Biden comes in and after a year we are one the verge of WWIII with hyperinflation. Bring Trump back!

Bring back a racist, sexual predator for what? More bigotry?

My friend, the only person worse than a bigot is another bigot who well hides their bigotry. And Biden has always been such a person.

Bring Trunp Back? He would send soldiers and weapons to Putin to help him.

You're clearly among the more severely indoctrinated anti-Trumpers. Turn your TV off and read some good non-politically bent books. And try limit your time "online" each day, as I do. LOL