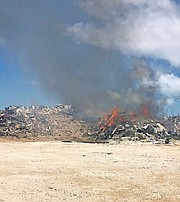 ONE of the pictures of the blaze on social media yesterday.

FIRE at a debris site in Abaco sparked concerns yesterday that more of the waste will burn and potentially endanger the health of residents as temperatures heat up moving into the summer.

Alex Storr, chairman of the Disaster Reconstruction Authority, said the fire in Spring City, Abaco, was extinguished after about an hour.

“There seemed to be a fire started due to internal combustion from the site,” he said. “The operators of the site were able to call in additional equipment and with the help of the volunteer and local firefighters in Abaco, as well as some well-intentioned citizens, they were able to get the fire under control and extinguished and the operators are going to take additional measures to make sure that it doesn’t flare up again.”

One measure, he said, will involve the use of fire retardants that will be sprayed on the sites as a preventative measure.

“I think it may be just the second fire in Abaco, but as we near into the summer months where the temperatures will increase there is a danger there could be additional fires so that’s why we’re working feverishly to come up with a solution to reduce the size of those sites,” he said.

We expect to have talks with Department of Environmental Health next week as well as some experts in the field to come up with a solution that can be enacted as soon as possible.

“The fire-retardant solution will be good enough for now but you know as we get into the summer months where we got temperatures near 100 degrees each day it will become more difficult so that’s why we’re trying to come up with a solution to at least reduce the size and to minimise those chances.”

Mr Storr recently said the DRA is investigating several contracts for the management of dribs sites in Abaco and Grand Bahama after finding red flags.

“Those contracts we are looking at the $400,000 was in reference to a contract on Grand Bahama and the story with the $300,000 is Abaco,” he said. “But what it actually is is they have contracts to manage the debris management sites.

“Now the contracts are not for a set amount. What they do is they bill monthly for the work and I have to be careful how I say this. They bill monthly for work that is supposedly done and so sometimes the amounts for different sites could be around $150,000 and sometimes, as in the case of Grand Bahama, the amount skyrocketed to $400,000 or even $500,000.”

“There were numerous red flags.”