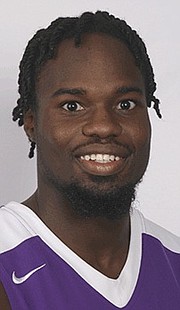 THE NCAA Division II season is near its conclusion and several Bahamian student athletes look to close out the regular seasons on a strong note as their teams prepare for the postseason.

Malachi McCoy and the Benedict College Tigers closed out the regular season with a 71-59 win over Allen University on February 22 at the Mays Arena in Columbia, South Carolina.

McCoy finished with 13 points. On the season, the 6’7” junior forward averaged career highs across the board at 10.7 points, a team leading 8.7 rebounds and 1.3 blocks per game. He shot 58 percent from the field and also finished with five double doubles on the year.

The Tigers, now 20-6 on the season, will look ahead to SIAC Championship Tournament in Rock Hill, South Carolina.

Benedict will be the second seed in the SIAC East Division and will have a bye until the quarterfinals and will play 2:15 pm March 3 against an opponent to be determined.

The regular season will conclude this weekend for several others.

Jonathan McFall and Slippery Rock are currently in the midst of a six-game winning streak and look to head into the postseason with a win over No.17 ranked Mercyhurst University.

In win number six, McFall finished with 14 points in a 79-72 win over Edinboro University. He also scored 15 in last week’s win over California and 11 in a win over Gannon. Following the regular season finale, it will be a quick turnaround for the opening of the Pennsylvania State Athletic Conference tournament on February 28. McFall is one of four players averaging double figure scoring for the 17-10 Slippery Rock.

In his first year with the programme, he is averaging 13.6 points and 4.9 rebounds per game while being tied for the team lead with 27 blocks.

Lathaniel Bastian and Angelo State Rams close out their season on February 26 against Texas-Tyler.

Bastian recently had 19 points and eight rebounds off the bench in just 19 minutes of a 91-76 win over Oklahoma Christian.

Bastian is fourth on the team in scoring at 11.6 points per game while leading in both rebounding at 8.1 boards per game and blocked shots at 1.5 per game.

Joseph recently posted double figures for the second time this season with 15 points off the bench in a 76-64 win over Catawba College.