INSIGHT: Who is letting these people ride rings round our planning laws?

A PECULIAR story caught the eye last week. A planning row has sprung up over two “swimming with the pigs” attractions in Adelaide Village.

The oddity is that applications for the land use of one, Beyond Da Village Pig Experience, and a Town Planning decision for the other, Da Pig Beach, are still being considered, it would seem, despite the attractions being open for business and busily bringing tourists in by bus to the frustration of residents caught in the middle and wondering how this can be happening in an area designated as residential. 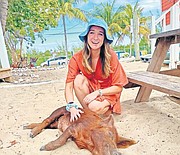 An image posted on social media this weekend from Beyond Da Village Pig Experience.

The idea that development could get underway without full planning approval is curious, to say the least, and residents of Adelaide are not the only ones to be raising questions.

In Western New Providence, there are also concerns over land clearance that appears to have already started for a new school which aims to open there.

King’s College School has arrived on the scene without any particular demand from parents for another school, and the proposed site is already seeing preliminary work, it would seem.

There are more concerns about King’s College than just clearing land, however.

The group setting up the school is the Inspired group, and the founder of that group is Nadim Nsouli, who has attracted unsettling headlines elsewhere. 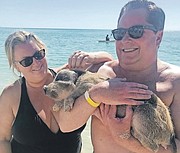 An image posted on social media this weekend from Da Pig Beach.

This is not the first school Mr Nsouli has been involved with – in fact there have been dozens around the world. One of those is the Brookfield School in Kenya, where a dispute with parents emerged over school fees during COVID in 2020. The school had moved to virtual learning and parents wanted fees reduced, and won a court hearing to get fees reduced by half. During a Zoom meeting, he then demanded parents pay the full 50 percent fee allowed by the court on the same day or the students involved would be cut off. He then agreed to extend that deadline to the end of the week if parents agreed to end negotiations and drop the lawsuit.

In this column at the end of January, I hailed the work of Bahamian educators as the country paid tribute to Rev Charles W Saunders, noting how he saw a need to extend secondary education for all young people in The Bahamas regardless of social class or colour, and became the first president of the Bahamas Baptist College when it was formed in 1988.

There has long been a resistance in The Bahamas to open our doors and let international companies come marching in. We shop at Bahamian-owned businesses with Bahamians at the helm, not chains with Walmart branding – so why would we open our doors to a school run by foreigners?

There are talented educators right here – as I noted last month, one of the leading contenders to take over the presidency of the University of The Bahamas is a Bahamian, Dr Ian Strachan.

And our schools have produced leading lights in the fields of medicine, politics – even Bahamians working with NASA.

So as word spreads of this new school on the block – and the potentially divisive nature of the group’s founder – there were legitimate concerns raised.

A Zoom meeting was to be held by the developer, but that became a meeting in person for invited guests only. So, if people had questions, they have yet to be given the opportunity to pose them and receive answers.

Still, it is curious this school would appear with very little fanfare, work would seem to be getting underway and there is little to be found out about it. What planning approvals have been given so far? Which approvals remain to be given?

There appears to be significant finance behind the project – as you’d expect for a group with more than 60 schools around the world – so you wouldn’t think the government would be shy to talk about a scheme that would presumably deliver significant numbers of jobs in construction and then ongoing jobs for teaching and support staff. As an international project, how many work permits is the business seeking for its teachers? Or is it looking to recruit locally?

Many of these are simple questions the Zoom meeting might have resolved. Will another be arranged? Who knows, nothing has been seen so far.

But for those reading of businesses opening without full planning approval in Adelaide Village, it is not encouraging to see work beginning when so many queries remain.

Pray tell, what stops any enterprising Bahamian Businessperson/Educator from buying a parcel of land and offering private schooling that meets an international standard? Is there some rule that limits the realization of their vision while enabling that of the King's College owner? I've heard horrid things about Chinese human rights breaches, yet they (and the equally controversial Saudis) own several worldwide hotel chains many of them on our soil. Perhaps we should limit all this foreign investment and pray for some enterprising Bahamian to make a sound business plan and convince investors of their capacity to execute to profitability. Bahamians, our feelings mean everything, practical solutions and actions? Minimal.