FACE TO FACE: A sacred place shared by generations 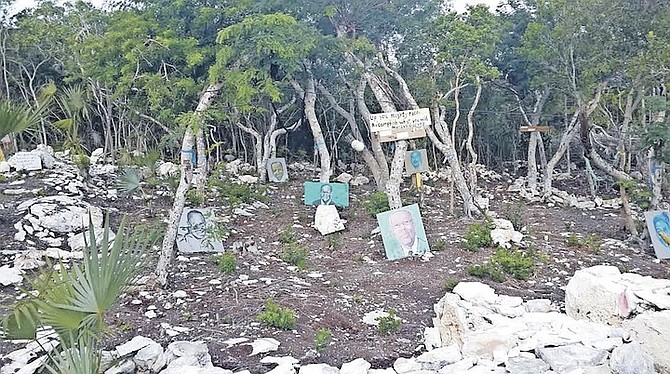 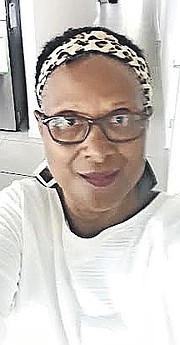 WHEN Joan Rolle first stepped foot on her property in Exuma it took her breath away. The panoramic views of the beautiful sea, the rolling hills… the scene was so awe inspiring she called it “a spiritual experience”.

“I was transported,” she said as she recalled the moment when she reached the top of the hill and looked around.

“It felt like you would if you reached the top of Mt Kilimanjaro, or saw the Serengeti for the first time. All the natural wonder and beauty… I felt it was God and God alone.”

Because of that, she named the property Gye Nyame. This is an adinkra symbol used by the Akan people of Ghana, West Africa meaning “except for God” or “the supremacy of God”.

“I wanted a name that would link the land to Africa and to my ancestors. As the mystery of the land unfolded, I thought it should be something that is shared with my family and others as well. Almost everyone who has been on this land has had the inclination that this is a sacred spot. My brother Stafford has had spiritual experiences and hair-raising encounters. A doctor from Boston who visited declared that this was indeed a sacred space. My friend Amunet had a spiritually enlightening experience here.” 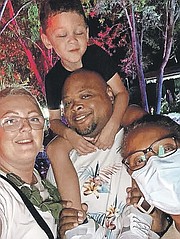 Joan with her son, Rupert, his wife, Peta, and his son, Azariah. 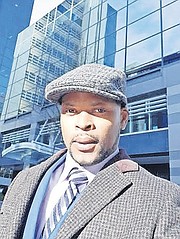 I join with those who tout the mystical attributes of the untouched rolling hills of Gye Nyame. When I visited with Joan some years ago, we were sitting on her porch one evening and saw a phenomenon few humans have ever experienced. We saw two suns in the sky. The second sun was not a reflection of the first. It was likely the natural miracle known as ‘harvest moon’. Joan and I will never forget that experience.

A part of what makes Gye Nyame sacred for Joan is that this land has been handed down through generations and with it, the preservation of her family history. Joan has the blessing of being able to go back several generations – something many Bahamians are not able to do.

Joan’s ancestor David Rolle, born in 1815, bought the property in 1863, 29 years after Emancipation. He was born into slavery in the settlement of Ramsey, the nearest settlement to Gye Nyame. Like most of the slaves born in Exuma, he carried the last name of Lord John Rolle. David bore a son named Samuel, who became the next title holder of the property, which is known by some as Jimmy Hill. Samuel and David owned boats and they traded between Exuma and South Andros. Samuel had a daughter named Julieann, who inherited the property. She lived to be 100-years-old before she died at her residence in South Andros. 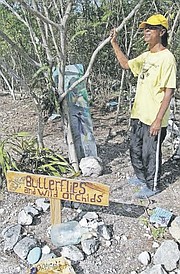 Julieann had a son named Amos, who is Joan’s grandfather. Amos was a farmer, and he worked on the Contract in America for a time. A well-travelled man, he also visited Africa. Amos was a devout Seventh-Day Adventist who was responsible for building the church in Mount Thompson. Amos bequeathed the land to his son Livingstone, Joan’s father. 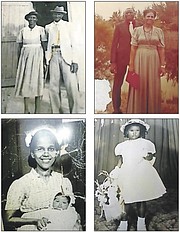 CLOCKWISE FROM TOP LEFT: Joan’s grandparents Amos and Drucilla Rolle; Joan’s parents Livingstone and Joyce Rolle; Joan as a little girl; Joan as a baby with her mother, Joyce.

With such rich history to share, Joan has constructed an earthly altar at the site with the words of Maya Angeou: “I am the hope and the dream of a slave”. The fact that she has cut a road, cleared a portion of the land, and created the sacred space Gye Nyame, she is fulfilling what her great great great grandfather David must have envisioned for his descendants – the use of the land that could serve generations to come. Joan recognizes that David saw that the power for the people is in the land.

“There is a West African saying that you do not really know yourself unless you can name at least seven generations of your bearers,” Joan told me.

She can name five and she has their names on rocks at the altar of their remembrance: David and Elisabeth; Samuel and Silvey; Julieann and Isaac; Amos and Drucilla; and her parents - Livingston and Joyce. She cannot say whose David parents were, although she knows they must have been born in Africa. Her sons Rupert and Michael Missick will be able to name six generations. Her grandson Azariah, along with her grand nieces and nephews, will now be in a position to name seven generations, thanks to the history provided by the preservation of this land in their family.

“It is a tribute, a history, a remembrance to us as a family,” she said.

“The joy is in sharing it with the people of Exuma, Bahamas and the world by turning it into a wellness heritage and retreat centre. We want to preserve the property as much as we can,” said Joan.

“My son Michael and I are working together to develop the land. We want the kind of retreat that has gentle human footprints on it, developing in ways that will not harm the land. We want to have a retreat with cottages or tents that work well with the forest – as if they are a part of the land. We want a farm to create a farm to table experience for our guests. We will have a clubhouse where we can gather. The sunsets and sunrises are phenomenal here… and at night, the stars shine bright. I can see constellations like the belt of Orion clearly.”

Gye Nyame lends to many wondrous experiences. There are cocoa plum patches throughout the property. There are a number of mysterious holes and caves. At one of these, there is a slab of cut stone and some rocks arranged in a semi-circle. Joan believes slaves may have been practising an African traditional ritual at that spot.

There is a cave they call ‘the crab hole’ and there, large crabs live among giant ferns which are taller than some buildings. There is an abundance of wild orchids found throughout the property. There is an area of the forest rife with beautiful gum elemi (gamalamy) trees. More than 30 medicinal trees and plants have been identified at the property.

Joan is a veteran educator, and since retiring, she has brought scores of children to Gye Nyame for the experience. She started her career as a speech therapist before becoming a teacher at St Bede’s Catholic Primary School. She went on to become the Vice Principal of St Francis & St Joseph Primary, and then the Principal at St Bede’s. She also served as curriculum officer for the Catholic Board of Education; adjunct professor at Omega College; she does voluntary work in the Public and Oral History Department at the University of the Bahamas; and she is one of the co-founders of Akhepran International Academy, where she is the general administrator. She currently works at a small resort in Exuma while preparing to take Gye Nyame to the next level as a touring site then wellness and native retreat.

She is the owner and manager of Experiential Education - nature and heritage tours for children and adults in New Providence and Family Islands. Children from New Providence, Long Island and Exuma have visited Gye Nyame.

They learn about native medicinal plants, naming ancestors, Bahamian living and farming techniques, and much more. They go snorkelling and they enjoy native dishes. On one occasion, as the kids were exploring the nature trails, three children ran up to a large wild tamarind tree and together exclaimed, “Look, it’s the goddess tree!” They hugged the tree and all the other children followed after. The adults then realised that the tree was indeed shaped like a woman with outstretched arms.

When Joan was a teenager attending St Augustine’s College, she, too, had the opportunity to visit Exuma as a student. She was able to see her grandparents’ house in Mount Thompson, which was later donated to the church and turned into a hall. She wants people to have the same kind of rich experiences that island life has to offer.

Joan grew up in New Providence in the Valley - off Mount Royal Avenue, but she had her taste of island life when she went to Delectable Bay, Acklins, to her mother’s family, the Hannas. There, she remembers bruising corn in a giant mortar and pestle to make grits.

She recalls the kerosene refrigerator, and the fact that the home’s kitchen and outhouse were separate. Island people were rich in the ways of the land.

Her grandparents in Acklins, Luther and Margaret Hanna, would send a box of goods to their children in New Providence all the time.

They would get fruits and vegetables, goat, turtle, conch, fish and lobster. From time to time, they would even send a cow, which they would keep in their yard until her father slaughtered it for their meat.

Her grandparents Amos and Drucilla did the same, sending goods to her parents, Livingston and Joyce, from Exuma. She vividly remembers receiving turkeys from them every Christmas which aided in delicious holiday meals.

In just a matter of months, Gye Nyame will begin welcoming natives and tourists to the property for a natural experience in Family Island living.

Her hope is to see the retreat become a place where others could have the soul-stirring experiences that she did – a place where you could get lost in time – but also find yourself. For more information, email rolle.joan@gmail.com.