Man who died after being stabbed ‘was trying to stop fight’ 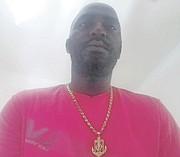 A MAN died days after being stabbed on Christmas Day when he was trying to stop a fight, a relative said.

Although police have not officially revealed his identity, loved ones told The Tribune the victim was dad-to-be Lamark Pierre, 34.

Police said shortly after 1am on December 25 they were informed that a man had been brought to the Accident and Emergency section at Princess Margaret Hospital suffering from a stab wound to the stomach.

“The victim was admitted and treated for serious injuries. However, on Tuesday 4 January, 2022 sometime around 5am he succumbed to his injuries,” police said.

The victim’s cousin, who did not want to be named, said the family is taking the death “very hard”.

“We didn’t spend Christmas or New Year’s (together). . . he never came home.

Mr Pierre was supposed to get married this year.

His cousin said based on what people have told her, there was a fight at a bar and Mr Pierre was trying to stop it.

Asked if the 34-year-old knew the person who stabbed him, the cousin said: “Apparently, one of the guys he went out with knows the guy (who) stabbed him, but he personally don’t know them.”

The relative said the incident injured the victim’s kidney and they were told that it was “serious”.

“They said because his pressure was too high they couldn’t operate on him, but he was in a lot of pain,” the relative said.

“. . .They tried to save it, but like I said because it was injured so bad and it was giving him pain and with his pressure (there was) nothing else they could’ve done.”

The victim's family said he died on January 3.

She said Mr Pierre was excited about the new addition to the family.

“A week before his death there’s a place that we call The Yard where all of us go out and me and him was just there talking and just sharing jokes and having fun.