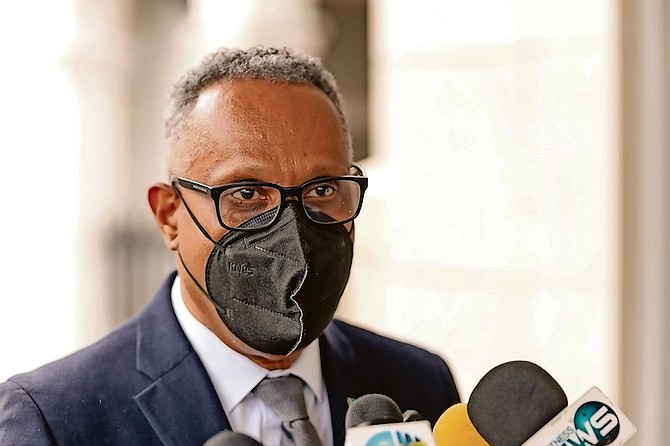 HEALTH and Wellness Minister Dr Michael Darville has defended the government’s decision to suspend the mandatory RT-PCR test requirement for vaccinated people entering the country, citing challenges travellers were having obtaining the tests due to supply shortages overseas.

Yesterday, the minister said over the last few days officials were “battling” the issue as hundreds of Bahamians were stuck abroad and millions of dollars in hotel reservations were at stake.

While noting the RT-PCR requirement remains in place for people who are not fully vaccinated, Dr Darville said it was the intention of the government to reinstate the PCR test requirement across the board by the end of January when the spike in cases is expected to calm.

The mandatory PCR test requirement was to come into effect tomorrow.

The decision to suspend it was announced Tuesday.

“Well, it’s the right move for us because what’s happening is it’s so difficult to get a RT-PCR test that it’s pretty much impossible for people to travel,” Dr Darville said.

He was asked yesterday by The Tribune whether the decision was the right move considering increasing COVID-19 cases.

The Ministry of Health and Wellness said there were 375 new cases of COVID-19 recorded in the country Tuesday.

There were 317 in New Providence, 31 in Grand Bahama, one case in Abaco, four new cases in Eleuthera, nine in the Berry Islands, two in Exuma, three in Andros and one in Long Island.

There were also four new cases in Cat Island and three cases with locations pending.

Hospital cases have also surged, rising from 58 on January 3 to 71 on January 4.

Dr Darville continued: “We were supposed to go into effect by the 7th but the demands for the RT-PCR are so intense that it’s virtually impossible to get it.

“We have Bahamians stuck.

“So, we have to modify the rules so that we would be able to have some movement across the border for Bahamians as well as some of our guests.

“We came up with a compromise where we would do the rapid antigen test 72 hours prior to departure and rather than waiting for five days on arrival we do it at 48 hours on arrival.

“You know why the decision was made?” Dr Darville added, “Not because we didn’t want RT-PCR tests, but you can’t get them and so that’s what we’ve been battling with for the last couple of days where we’ve had hundreds of Bahamians stuck because they can’t get the test.

“Millions of dollars in bookings at hotels were at stake because you can’t get the test, that’s the problem.

“It sounds good and practical and we tried to implement it but can’t because some people have to drive from Miami to almost Orlando to get a test. That’s how high the demand is.

“The demand for testing exceeds the supply for testing. It’s that bad.”

Regarding when the measure will be implemented, Dr Darville said: “I am proposing the suspension to be pushed back until the end of January when the season calms down and we begin to see the fall of the Omicron variant because it’s just skyrocketing, particularly in South Florida.

“I want the test but can’t get it so for practical terms we have come up with a compromise.”

Vaccinated persons, as well as children ages 2-11, may continue to present either a negative rapid antigen test or negative RT-PCR test, according to updated travel protocols on the Ministry of Tourism’s website.

In addition, effective January 4, all persons remaining in The Bahamas for longer than 48 hours will be required to undergo a rapid antigen test, regardless of vaccination status.

Details of the protocol changes include that all those travelling to this country from other countries, whether fully vaccinated or unvaccinated, will be required to obtain a negative COVID-19 test taken no more than three days (72 hours) prior to the date of arrival in The Bahamas.

Suspend the PCR test for everyone it's BS.. They are expensive, timely and do not provide accurate evidence of who is contagious or not...

Many who monetized Covid as their golden egg are afraid of old normal preferring covid hysteria for life. In the UK the BJ government has been threatened by its own party not to impose new restrictions as the vaccine database of four boosters to be fully vaccinated is a cause of concern on the ground. So far lab data that promised to end covid by lockdowns, sever restrictions and forced vaccinations have failed at the ground level. The PCR test picks up fragments that are up to 30 days old so the CDC has banned its use from Jan 1st 2022.

Thanks to Joe Biden. He criticized the last president for the same thing. It was obvious why the plp changed its mind.

Yup, once again Darville got caught with his pants down. lol

I think there is merit in what he's saying, it's pretty chaotic in the US at the moment.

Currently, it's nearly impossible to get a home test kit from any drug store in the US. They all have signs in their windows saying they are out of stock. Similarly, it's hard to get a test appointment (PCR or Antigen) within 7 days, and for non-appointments you are lucky if you have to wait in line less than 5 hours. The holidays and back to school testing requirements have caused major problems.

My son recently had to have a PCR and Rapid Antigen test. The Antigen test took 48 hrs to get the result (instead of the normal couple of hours), and the PCR result 3-4 days. These turnaround times are not helpful if a 72hr PCR result is required.

Yup, the super wealthy globalist oligarchs and their anarchist friends are in their glory as they fleece and herd the dumbed-down confused sheep and young lambs to slaughter.