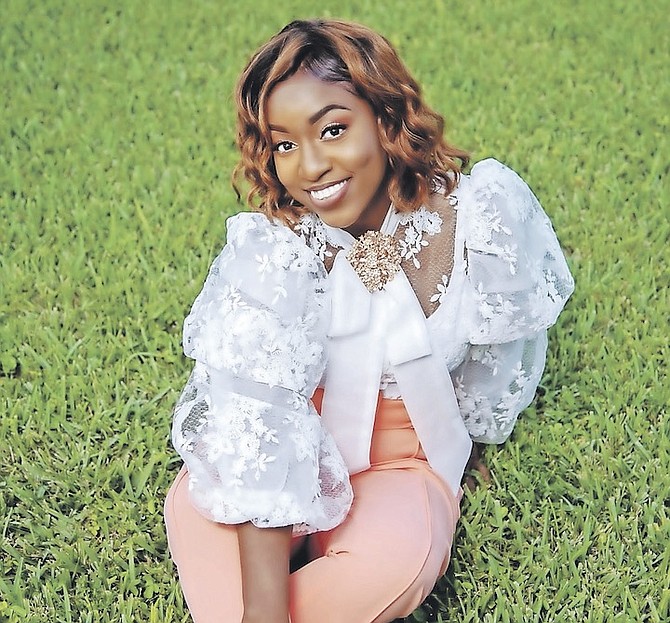 STRONGER than ever - Grand Bahamian teacher Markel Williams is working through the trauma she experienced as a child and inspiring others to do the same with her new book, “Messages from God”.

IT WAS through a letter written to her mother when she was 16 years old that Markel Williams finally unburdened herself of the terrible secret she had been carrying for over a decade.

She was just five years old when she was sexually molested. She told no one of her ordeal and was left to grapple with the pain and shame on her own.

Now in her 30s, the Grand Bahamian teacher is confronting her trauma for the first time in her life through therapy and embarking on a healing journey.

As a school teacher, she is adamant about teaching her young students to never keep quiet about inappropriate behaviour they may be subjected to.

Many victims of sexual abuse are violated by perpetrators known to them and whose care they are entrusted to. This was also the case in Markel’s situation; her abuser was a neighbour and someone considered “a friend of the family”.

“I was living with my Grammy and mother but they had to work and needed someone to watch me until they got off. So my Grammy left me with her friend, who was also a neighbour. However, her friend ended up leaving me with her husband,” she told Tribune Woman.

Markel said this man told her they were going to play a game and then he raped her.

To keep Markel from telling anyone what happened, her abuser would give her gifts.

“He would be super nice to my family,” she said.

The molestation did not end there.

“When he came by us, he usually lifted me up, ensuring my body rubbed across his private area. This man was sick and slick,” she said.

Five-year-old Markel did not understand what was happening to her at the time. It was only when she was older that the magnitude of what she had experienced dawned on her.

“When my mom got married, my stepdad moved us from around that neighbourhood when I was about 12.”

Though she did not have to see her neighbour anymore, the abuse she suffered always remained with her.

“I mustered the strength to write my mother a letter telling her what happened when I was 16. No one knew, not even suspected, what had happened to me,” she said.

After revealing what she had endured, Markel’s mother reported the matter to the police. Unfortunately, the family received no justice.

“They took the matter to the police station when Mummy read the letter. But nothing came out of that. They didn’t push the issue,” she said.

As more family members became aware of Markel’s abuse, tensions grew and the situation finally escalated in a confrontation with her abuser that almost turned violent.

“Of course, he denied any wrongdoing and said that he did not touch me, but he did,” she said.

Today, Markel is receiving professional help to deal with the aftermath of her abuse that has lingered for years. She said it has impacted every romantic relationship she has had as an adult.

“I felt mentally I did not heal from that and I never got the professional help to get past what happened. I was disturbed. And mainly all the guys I dated could sense it. I was not diagnosed bipolar but I acted that way. I was looking for a rescue in them,” she said.

Markel said therapy has been helping her to “sort out her life and let go of everything that tried to destroy” her.

She hopes all individuals who have experienced abuse are able to get the help they need and find a way to dig deep and forgive their perpetrators.

It was her Christian faith, she said, that allowed her to find the strength to face her abuser and leave him with a kind word.

“I told him I had forgiven him. It had been so long since he had seen me. And when he did, he said he was proud to see how I had turned out. He is old enough to be my grandfather,” she said.

Markel goes into detail about how God enabled her to forgive her abuser in her book “Messages From God”, a 30-day devotional.

She also has a message for parents: “Do the best in your power to protect your children and be very aware of the nature of the people around them, and if you suspect a person is sketchy, go with them and do not leave your children around such people.”

The Office of the Spouse will reach out to victims of sexual violence and domestic abuse and partner with organisations in the coming weeks in its continued and committed fight against abuse.

In a statement released last Thursday, Ann Marie Davis, representative of the Office of the Spouse of the Prime Minister, encouraged victims to come forward to help eliminate the stigma attached to domestic abuse.

Her statement referred to a recent Tribune Woman article on a book by Sheron J N Baptiste, who chronicled the horrors and subsequent fallout from her personal experience with sexual molestation, a traditionally taboo subject in polite Bahamian society.

“Like too many of our young girls, boys and women, the victim could have suffered in silence and shame rather than overcome by openly confronting her demons, her fears, and her psychological and emotional pain,” Mrs Davis said. “I publicly thank, commend and congratulate author and sexual abuse survivor Sheron J N Baptiste for breaking her silence and opening up about her painful experience in her book, ‘The Molested Fornicator: The After Effects of Being Molested’.