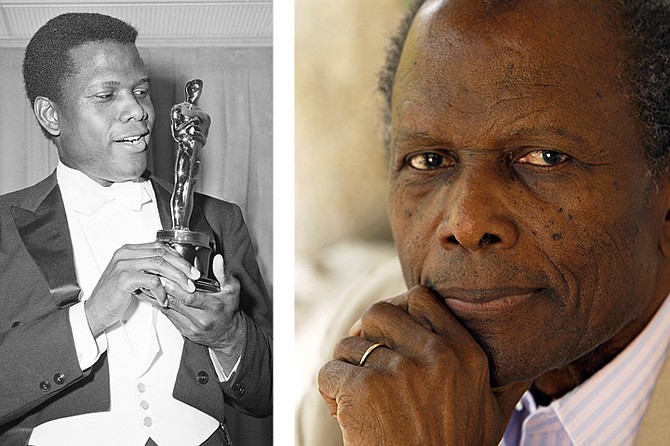 LEFT: Sidney Poitier poses with his Oscar for best actor for "Lillies of the Field" at the 36th Annual Academy Awards in Santa Monica, Calif. on April 13, 1964. RIGHT: Sir Sidney Poitier poses for a portrait in Beverly Hills, California in 2008. (AP Photo/Matt Sayles, File)

“I was surprised and saddened to learn of the passing of Sidney Poitier, the giant of American film and stage productions, Oscar winner and the proud son of The Bahamas,” Mr Ingraham said in a statement released on Friday.

“The child of Cat Island sharecroppers who were working in Florida’s agricultural fields at the time of his birth, Sidney rose from a humble childhood spent in Cat Island to become a masterful Broadway stage and Hollywood film star, the first Black man to win a coveted Best Actor Oscar for his performance in the 1963, Lilies of the Fields.

“I join with all expressing deep sorrow at his passing, but most especially in expressing thanks and appreciation for his important contribution to the advancement of Black people the world over.

“Sidney Poitier was 94 years old, a mighty age. His was a long, productive, and meaningful life that served to expose racial inequalities both in the United States of America and in this country. His support, together with that of a number of his contemporary Black film actors, played an important role in the struggle for civil rights in America. His Oscar win opened the door through which countless talented Black and other minority actors would follow.

“I was especially happy when, breaking with a lifelong commitment not to become involved in official government bureaucracy, Sidney accepted the invitation from my government to serve as non-resident Ambassador of The Bahamas to Japan. I was not surprised when his presentation of credentials to the Japanese Emperor, Akihito, on April 16, 1997 was carried by the BBC news and major American news outlets but was amazed that the event was considered of such note that the BBC interrupted its regular broadcasts to carry the ceremony live.

“Reports were that the Emperor broke with his own protocol to speak with the new Ambassador as a fan of his films. Indeed, Sidney’s Bahamian roots (were) not infrequently a subject of my light exchanges with world leaders.

“I was pleased when the PLP government named the second Paradise Island Bridge constructed during my second term in office, in honour of Sidney Poitier.”

He extended condolences to Sir Sidney’s wife and children, particularly his daughter Pamela “who has made a home for herself in Cat Island” and to all his extended family in The Bahamas and abroad.

“We shared in your pride in his tremendous accomplishments, and we join you now in lifting him up as a premier son of The Bahamas. May he rest in peace,” Mr Ingraham said.