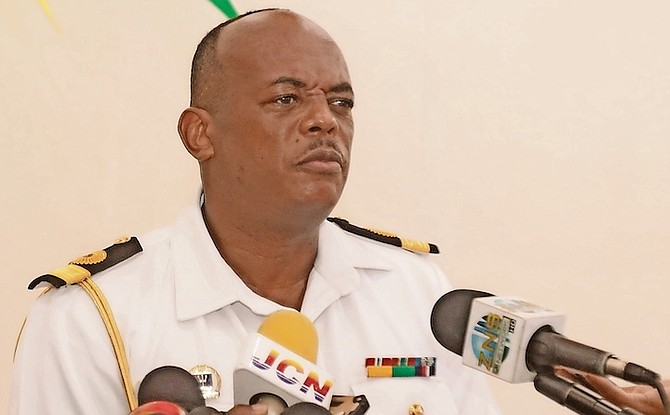 DURING the first week of this month, COVID-19 infections within the Royal Bahamas Defence Force peaked at 216 cases, according to its Commodore Raymond King.

However, currently there are 119 active cases within the RBDF.

He said due to a recent rise in cases in the country believed to be by the Omicron variant of the coronavirus there is a drastic rise in cases among marines.

In remarks this week at the Office of the Prime Minister's press briefing, Commodore King gave the public insight into how the RBDF has been coping with the pandemic.

He said: “For the period mid-October to Christmas eve during the Delta wave we had experienced on average about four active cases, eighteen personnel being quarantined, a positivity rate of about 8.3 percent and a recovery rate of about 99.5 percent."

Commodore King said that it was not until the recent wave of the Omicron variant that cases on the force went up exponentially.

“...With the onset of the Omicron variant our numbers escalated to the extent that the average case is 131, personal quarantine 77, our positivity rate increased up to 11 percent and our recovery rate declined to 81 percent. Notably we experienced a significant increase during the final week of December 2021 when the number of active cases increased from 13 to 169. During the first week of January 2022, we peaked at 216 cases.”

Commodore King noted that there had recently been a decline in COVID cases – off 55 percent – with the current number of active cases this week now standing at 119. In analysing the contact tracing data Defense Force officials determined that 30 percent of the transmissions came from family and social gatherings during the holidays, another 45 percent were workplace transmissions and the remaining 25 percent came from travel abroad.

Commodore King attributed the high rate of workplace transmissions to the close proximity that officers live in and work together onboard their ships and training facilities.

He also addressed concerns that recent outbreaks of COVID may have impeded the RBDF's ability to patrol Bahamian borders, saying that while there are some difficulties in keeping uninfected members of the RBDF spread out on active duty the situation is in hand.

As the RBDF has already anticipated the time of year migrant vessels will try to cross the borders they have tactically allocated the resources necessary to combat this.

When questioned about rumours of a party at the Defence Force base over the holidays that could possibly have been responsible for the recent increase in COVID cases, Commodore King confirmed that there was a Christmas party, but clarified that the event in question followed stringent health safety protocols.

“The events that were held, the health protocols were enforced where persons had to demonstrate their vaccination status, an antigen test result and social distancing. And so, while I can’t rule out whether even exercising these protocols whether transmission would have occurred, but we did allow the messes to have those functions with the enforcement of those health protocols.”

Additionally, while the Commodore mentioned that he was open to the idea of offering incentives to officers to get vaccinated, it was not something he would offer.

Commodore King is politely acknowledging that RBDF officers are exposed to variants of COVID-19 as a result of their failing frontline efforts to address the ongoing invasion of our country by illegal Haitian nationals.

Repatriation flights of illegal Haitian nationals have all but stopped since the national general election last September and the shanty-town communities across our country are now experiencing explosive growth. Meanwhile, not a peep from Davis about the steps his administration are taking to address this existential crisis. He and his wife are obviously just too busy enjoying the high-life in places like Dubai.

We continue to be inundated with illegals and this government just as all before them don't have the fortitude to implement common-sense initiatives to discourage the invasion!