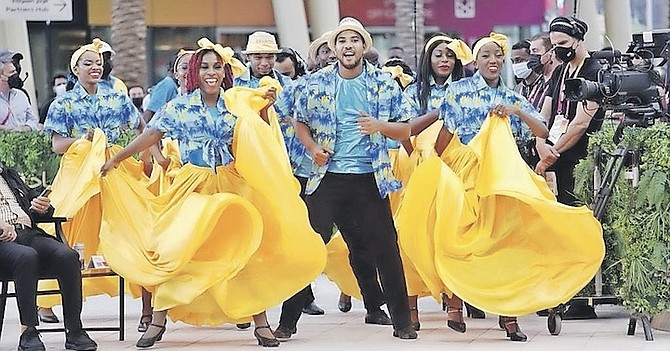 CULTURAL advocate Pamela Burnside says what she’s seen on display from some of the participating Bahamian acts in Dubai threatens to “mash down” all of the cultural strides made over decades by her and her late husband Jackson Burnside III.

Mrs Burnside told The Tribune that she was “perturbed” by a lot of the performances put on during Expo 2020, saying she was of the view that the nation was most likely left embarrassed in the eyes of the world. Bahamians at home were able to view some of the shows virtually in addition to video uploaded by some who made the trip.

She said a lot of what took place was the result of failure on the part of the government to consult Bahamians with cultural expertise.

While expressing certainty that the Royal Bahamas Police Force Band and the Bahamas All Stars Band put on world-class acts, Mrs Burnside expressed grave displeasure with a dance act that in her view disrespected the laws and morals of the Middle Eastern country among other participants.

“I was just very perturbed from the point of view that number one, a praise and worship choir went instead of the National Youth Choir,” she said. “When we are on the world stage our national institutions are supposed to represent us and at the quality and at the excellent standard. So, I was really upset to know that they weren’t taken and I find it a bit of a conflict for Clint and his choir to go.”

She was referring to the presence of Press Secretary Clint Watson, who travelled to Dubai and performed with gospel choir Shaback.

She also took issue with the performance of Bahamian comedian Terez Davis-Nixon, who performs as the persona Miss Daisy.

“From the point of view of Miss Daisy, that was just mind boggling for me because number one they are not respecting the culture and the laws of the host country. Alcoholism and intoxication is definitely something that is frowned upon and we know what the situation is with females in the Emirates.

“To portray a drunken totally made-up woman that can’t even walk properly and speaking in the Bahamian dialect that only we can understand, but nobody else is going to understand, that is totally inappropriate and it’s brought nothing to the whole contingent.

“I don’t know who chose the people to go, but they really should have had a group of people around the table to help them to make those decisions and from the point of view of the disrespect of the country this morning I was just at a loss for words this morning when I saw they opened with young ladies holding up their long skirt and showing their legs on the stage. Their arms were even bare and they were kicking up their legs in front of the delegation from the Emirates, that is totally unnecessary and disrespectful to the host country.”

She also said: “Fred Mitchell was there as the Minister of Foreign Affairs and he has been over in that area for many, many years up and down and to have allowed something like that to be a cultural show?

“It’s embarrassing for us as a country. If we have diplomatic relations with countries it’s our responsibility to know the culture and the laws and to prepare whoever we send to represent us in the proper way so that we don’t offend those people.

“I love my Bahamas and my Bahamian culture. It has been the product of my life’s work and that of my late husband and to see it mashed down? For us to be represented in a space like that without the finest of the finest?

“A lot of the things that we sent over there were not respectable and we cannot put that on the stage.”

There has been much backlash over The Bahamas’ representation in Dubai, mostly from the standpoint of who attended and the money spent.

The Bahamas government budgeted up to $1m for participation and presence at the expo, while the private sector put up $500,000 and the government of the United Arab Emirates spent $3.5m, a Davis administration official has said.

Police Commissioner Paul Rolle is also at the event. In a tweet yesterday, he sought to set the record straight about his travel there. “I wish to set the record straight,” Commissioner Rolle tweeted. “The Bahamas government did not pay for my trip to Dubai and did not give me any per diem. Quite frankly I am free to travel anywhere in the world that I wish and don’t need permission from anyone.”

Commissioner Rolle has also tweeted photos from his trip, including of a tour he and Prime Minister Philip “Brave” Davis had of the police facilities in the UAE.

Even the COP distancing himself from this train wreck

This woman was very quiet during the FNM and the doc disastrous term she use to delight in calling MR: Christie "The Emperor"

So she did not like the performances too bad and too sad.

The mean old spirit is back

it is my hope she remains perturbed, full of anxiety concerned and unsettled

If more people understood planning they would realize the FNM has everything to do with this. This was 6 years of "preparation".

The FNM should be able to have a press conference and pull out their plan dated January 2018 and from it read from their Human resources Plan. It would list all of the roles needed to pull this project off from start to finish including a full listing of the roles needed for Bahamas Day. They would be able to show that they had specific criteria for selection of every single person going on the trip and they would then be able to pull out the Budget associated with this specific item. They could then show how the PLP went off the rails and just selected some people they know with no kind of plan.

The fact that we have to wait for anyone to produce any report is very telling. At minimum they should have been able to say from Friday at 9AM, we havent consolidated January's numbers as yet, but here's the monthly status update for December

The 2018 plan was shelved after the pandemic hit and there, on the shelf it stayed until the PLP took over.

Yes I heard Diggiss say the budget for the sustainable climate change structure had to be adjusted. That would not affect the plan or the budget for Bahamas Day.

And you know the funny thing about plans in changing environments? They get updated and then reported on at regular intervals. Halkitis is saying it'll take him a couple of weeks to produce something. This is unacceptable. Hotel, food, plane ticket, ground transportation, per diem, wardrobe, freight and packaging fees. They must have an approved list of who travelled, in what capacity and for how long

(Id like to know how we went from addressing climate change with sustainable solutions, directly addressing the goal of the expo, to it being solely a marketing project and song and dance showcase)

All the sour grapes rolling off the wine press. All at once. Culture is multifaceted and cannot be contained in a cardboard box. No one person can decide what is appropriate or inappropriate. If the Arabs approved the performances and allowed them to be displayed, then why should Bahamians have an issue?

Minnisitis team picking at straws for legitimacy. Just shameful this blackcrab syndrome. The hate Brave press is huffing and puffing full steam to create division and hatred. How insanely they rant on as children cannot be educated going into three years. Guess they will find energy to grumble and complain as this is the only way to get on the popular stage and this negative spirit puts so much fear into prospective Bahamian creativity. Performers putting down performers all representing One Bahamas. Lift up your heads Bahamaland.

Personal grievance fire storm by the press has become a national alarm just farting a firestorm. And we wonder why our artists can only become affirmed by the outside world. We are such a jealous breed of people so willing to riot and teardown persons spirits. We have no opinion of Bahamian in the mirror unless it is negative. This self hatred of Nationhood prefers Colonial masters to impose what should be accepted upon us. It is Brave to represent one's country and can be done from home,but we are not talented enough to project to the world.

they can have at it as long as the covid restrictions are gradually lifted.

This woman has to be crazy, we were not displaying the UAE Culture. We were displaying our culture. Ask these same women about what they think about women rights in UAE and they would respond in the negative but with the same mouth is asking our women to behave like UAE women when displaying our culture in the UAE. Insanity, Tribune knows how to pick them to try embarrass the New Day!!!! We are no longer lost, thanks to DOC.

Its their country. I understand some persons in the delegation got in serious trouble for behaving as you suggest, like we free to do anything we want in their country irrespective of their cultural norms.

Im sure you've seen Hillary Clinton wear a scarf when she visited Muslim countries. She did not say I'm Secretary of State of America. If she from Great America with nuclear bombs and battleships can abide by customs, who are we?

... there has been an erosion of the concept of respect for decades now. People believe they can do as they want when in other countries and that is simply not so. Anyone who has traveled beyond Miami would know that. Burnside is right, this was totally culturally inappropriate. You never insult your host, ever!