PETER YOUNG: A hat-trick of howlers has taken the shine off of Great Britain 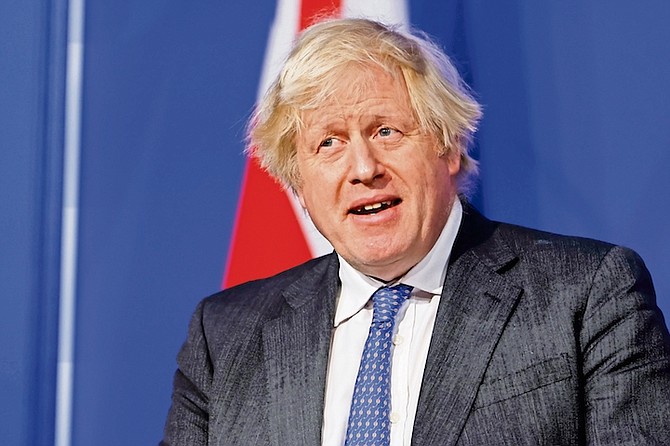 British people have always been avid travellers. Waves of migration from the days of colonial expansion during the early 19th century have been followed in modern times by large numbers choosing to live overseas, sometimes in the pursuit of economic opportunity, while nowadays the younger generation tends to be more mobile in an increasingly integrated world.

But all too often British expatriates become homesick as they recall the familiarity of their home country and traditionally have retained strong feelings of patriotism and fierce loyalties in defending their ancestry. Thus, it struck me that many might be concerned about serious developments in their home country just weeks into a New Year.

There are now three major issues in Britain which may have long-term consequences; namely, the political turmoil in which embattled Prime Minister Boris Johnson is embroiled, the scandal surrounding The Queen’s second son Prince Andrew and the huge controversy engendered by the award of a knighthood to former PM Tony Blair.

First, the current pressure on Mr Johnson. He is under fire for what is being called “Partygate”. This has been described as political dirty laundry that is rocking the Tory government which he leads - and it has added to the earlier widespread criticism of him after a series of other errors and poor judgments. It has now emerged that, while the UK was in a strict lockdown in 2020, a regular series of parties involving large numbers of people were being held at his office/residence at No 10 Downing Street and that the PM himself attended at least one of them. These were in contravention of his own government’s COVID restrictions and, therefore, illegal.

He has apologised to the House of Commons, though admitting an error of judgment rather than wrongdoing. He has not only been accused of breaking the law while members of the public were making sacrifices in their personal lives on the orders of the government, but also for lying about it. He has also apologised to Buckingham Palace for his staff holding one such party on the eve of Prince Philip’s funeral while the country was supposed to have been in mourning.

What a disappointing and dispiriting picture this represents for everybody. For it beggars belief that those concerned in Downing Street, who are working directly for the person responsible for running the country, could have shown such bad judgment.

The PM is facing calls to quit from members of his own Conservative Party, some of whom are saying they are “troubled, angered and appalled” by what has happened and he may be forced to stand down. But the next step will be a report by a senior civil servant who is now investigating the case. This could be published within days and his future may depend on its findings and recommendations. Meanwhile, he could be toppled anyway if enough of his own MPs turn against him.

Under the Conservative Party rules, a confidence vote will be triggered if 15 percent of Tory MPs write letters of no-confidence in him to the chairman of the backbench 1922 Committee. A vote of no-confidence would follow and, if more than 50 percent voted against him, he would be ousted and a party leadership election would follow.

The second issue, the sex scandal involving Prince Andrew, has now come to a head. After a long drawn out legal process that has already seriously damaged Andrew’s reputation, a US judge has ruled he should now have to face a civil case in relation to accusations of sexual abuse which he vehemently denies and is prepared to fight in order to prove his innocence.

Last week, in a brief statement from Buckingham Palace he was stripped of his military titles, royal patronages and charitable affiliations and it was declared he would continue not to undertake any public duties. He has also been stopped from using his title of “His Royal Highness” for official purposes. He will, therefore, have to face the court case in the US as a private citizen.

This will have been a tough decision for The Queen and a painful duty in relation to her favourite second son. But it is said that, in order to protect the dignity and reputation of the institution of the monarchy, she had no choice - given the need, in particular, to limit damage to this year’s Platinum Jubilee celebrations.

Even though Prince Andrew has already brought the Royal Family into disrepute over this sex scandal, it is said The Queen’s first priority is to safeguard the monarchy so she had to distance the Royal Family from the immense damage of a court case in which the Prince could face the ignominious prospect of being cross-examined about his private life.

The third event is the award in the New Year’s honours of a knighthood to former Prime Minister Tony Blair. This is the Order of the Garter as a Knight Companion which is within the gift of The Queen herself. It is traditionally given to former Prime Ministers - the most recent one being Sir John Major - though Blair has had to wait 14 years for it.

Although a successful political leader in many respects, he remains a discredited figure in Britain after facing a public backlash over his decision to take the country to war in Iraq and Afghanistan. Such is the level of his unpopularity that a petition to cancel the award has attracted more than a million signatures - and many complainers are now calling into question the judgment of Her Majesty’s advisers.

This has come at the worst possible time as many people are genuinely concerned about the effect on The Queen personally of the scandal surrounding Andrew so soon after losing Prince Philip less than a year ago and having had also to face the pain and embarrassment caused by Harry and Meghan’s harsh and - in the view of most people - unjustifiable attacks on the Royal Family. As she continues to bear these various blows with dignity and fortitude, judging from the huge number of comments in the UK press many people now wonder how - after a lifetime of duty, dedication and hard work - The Queen manages to put up with it all.

Is this really justice for all?

It has always been said British justice is supposed to be blind. It deals in truth, hard evidence, fairness, objectivity and cool-headed impartiality and it respects legal precedent. But, in the view of many, various recent cases have tested the validity of this claim, with some people saying justice in the country is beginning to “take a back seat to wokery”, while others have even expressed doubts about the jury system.

Earlier this month, four protesters, who had been caught on camera in 2020 toppling a statue of slave trader Edward Colston in Bristol in the southwest of England, were acquitted by a jury on charges of criminal damage. They were part of a Black Lives Matter group who then threw the statue into the nearby harbour while the police stood by watching the demonstration and declining to take any action. The BLM activists argued that tearing down statues was a legitimate political protest which justified committing criminal damage.

Another case last week was the clearing by a jury of Extinction Rebellion activists who had climbed on to train carriages and blocked a railway line in London while demonstrating against the UK government’s alleged lack of action over climate change. They justified their actions by claiming such civil disobedience was in accordance with their Christian faith in order to secure needed action by government.

There have been comparable incidents during the last few years and all these have fuelled concerns that, if juries are more likely than not to acquit such protesters, the police could become even more reluctant to arrest them and the Crown Prosecution Service to prosecute them.

This has prompted a fresh debate in Britain about such lawlessness. Many, including MPs, are saying that allowing those responsible for vandalism and criminal damage - or for blocking roads and transport systems - to go free of any punishment or sanction creates an unfortunate precedent. It gives a green light to others to commit such offences in the name of religion or extreme political ideology; and, the critics maintain, it is outrageous in a free society to allow people through their selfish actions to disrupt the right of the majority to go about their daily business.

One of the problems appears to be the interpretation by some British judges of people’s right of protest and freedom of assembly under the European Convention on Human Rights which the UK still adheres to post-Brexit. It seems to me the judiciary may be overemphasising the need for tolerance instead of recognising that disruption and damage to public property caused by activists exercising their right to freedom of expression and peaceful assembly is unacceptable to society as a whole. Judges may, therefore, have erred in failing to guide juries properly as they are seen by some people to be misinterpreting human rights under the terms of the ECHR.

According to opinion polls, most people condemn the perpetrators of such behaviour so that these recent cases could result in an eventual tightening up of the law - and this could even mean changes to the jury system which is considered as a fundamental part of English justice.

Free to air our dirty linen

During the course of writing this week’s column, it occurred to me that others might find it overly critical of my own country, Britain. It is certainly not my intention to be censorious for the sake of it.

But being able to describe freely and honestly what is going on in the country and publicising wrongdoing or incompetence among the ruling class - without fear of harassment or victimisation - is all part of the right of freedom of expression that is a central plank of democracy. The monarchy is a key part of the life of the nation and the actions of the government affect the lives of everybody. So it is important to air what is happening - both good and bad; and that, of course, is one of the roles of the Fourth Estate.

While researching this, I came across a recent survey about British expatriates. It found that what nearly 50 percent of Britons currently living overseas missed most was the English countryside. According to the survey, they also missed such things as marmalade, scones, crumpets, custard and fish and chips as well as a trusty English pub.

Memories are often selective and tend to emphasize the positive. So, many are aware of Shakespeare’s description of England in grandiose terms in his play Richard II as “This royal throne of kings, this sceptered isle, this blessed plot… a precious stone set in the silver sea…”

Or they may be able to recite at least the opening words of the famous poem “Home-Thoughts, From Abroad” by Englishman Robert Browning: “Oh, to be in England now that April’s there”. But whatever may be the case, as mentioned at the beginning of this column, many yearn for the familiar in their own country which they fervently want to prosper - and, most importantly, they often retain a fierce loyalty to their roots. So they want to know what is going on in their own country.