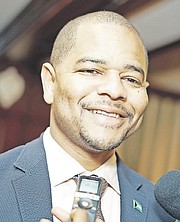 A Bahamian digital payments provider has successfully fought off a bid to seize control of its operations by fully repaying the debt owed to Sebas Bastian’s investment house.

Justice Ian Winder, in a January 13, 2022, verdict, confirmed that Investar Securities had sought to “withdraw the entire action” it brought against Sun Island Transfers, which trades as Sun Cash, after the latter made “full payment of its outstanding indebtedness”.

“In my view there is nothing further to be obtained in the action, and it must be withdrawn or otherwise dismissed,” the judge added. “The plaintiff [Investar], having accepted the sums owed to it, there is no likelihood of the appointment of a receiver over the assets of” Sun Cash.

No figures were provided for Sun Cash’s debt repayment, or how much it won in legal costs. Barry Malcolm, Sun Cash’s principal, declined to comment on this when contacted by Tribune Business yesterday. It is understood that the debt was repaid via cash flow rather than any new investor buying into Sun Cash.

Investar, which is the investment and financial services arm of Mr Bastian’s Brickell Management Group (BMG), had originally sought to convert a loan made to Sun Cash into a 49 percent equity ownership interest in the well-known electronic payments solution provider.

However, its plans were scuppered by the Central Bank of The Bahamas, which refused to approve Investar’s ownership move on the basis that it would violate “their policy of excluding gaming-related entities from the money transmission business”.

The “gaming” reference alludes to Mr Bastian’s ownership of the Island Luck web shop chain, which is widely regarded as the domestic market leader. The Central Bank also mandated that Sun Cash seek a new investor to acquire that 49 percent shareholding by yesterday.

However, undeterred at being thwarted by the Central Bank, Investar just one month later sought the Supreme Court’s permission to appoint Mr Galanis as interim receiver/manager on the basis that Sun Cash had defaulted on its loan repayments.

The move appears to have been sparked by the Central Bank’s rejection of Investar’s purchase, and the default was denied by Sun Cash. It was backed by Justice Winder, who said it was “accepted” that the loan repayments were current. As a result, he ruled last year that appointing Mr Galanis to take over Sun Cash’s property and bank accounts at this time would not “be just and convenient”.

Investar had secured loans advanced to Sun Cash through two debentures attached to the latter’s assets. These were issued on May 11, 2020, and May 21, 2020.

The terms permitted Investar, upon giving 30 days’ advance written notice to Sun Cash, to “require” the latter to convert its loans into a 49 percent equity stake in the money transmission services provider. This would have resulted in Mr Bastian’s investment house receiving 3,290 ordinary shares priced at $446.43 each, valuing its interest at $1.469m.

Investar sought to exercise this conversion option on May 20, 2020, just nine days after the first debenture was secured. However, the deal required approval from both the Central Bank and Securities Commission.

“They [Sun Cash] say that notwithstanding earlier informal verbal indications from the Central Bank that Investar would be suitable, the Central Bank subsequently, on August 7, 2020, denied the application on policy grounds,” Justice Winder wrote in his June 2021 judgment.

“The Central Bank not only denied the application for Investar’s equity conversion, but imposed a deadline by which Sun Cash must secure a new shareholding or cessation of its business.”

Charles Littrell, the Central Bank’s inspector of banks and trust companies, served notice of the Investar denial on January 25, 2021. Just one month later, on February 24, Investar served notice on Sun Cash’s parent that it was in default under the debenture and, two days after that, sought Supreme Court approval to appoint Mr Galanis as interim receiver/manager.

Mr Malcolm, who at one time was chair of Playtech Systems, the parent company for Mr Bastian’s Island Luck web shop chain, replied: “Sun Cash is not insolvent and is meeting all payment obligations as they become due.”

He is a King Soloman

rich off of the poor and ignorant people. it should be illegal

what should be illegal is the strategy to gobble up the entire economy. We will recognize the danger when its too late