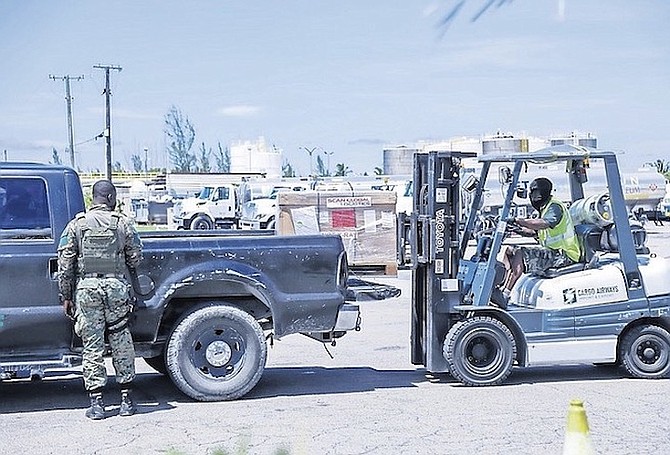 THE DELIVERY of 38,400 doses of the Johnson & Johnson COVID-19 vaccine in August. Photo: Racardo Thomas/Tribune Staff 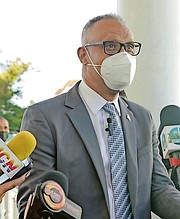 Dr Darville said he was not certain how many vaccines were thrown away.

At the beginning of December, there were 20,000 Johnson & Johnson vaccines which faced imminent expiration. Although the government increased use of the vaccines at the prison and traded some to a foreign incentive group, some of the vaccines were ultimately discarded.

Before Tuesday’s Cabinet meeting, Dr Darville said: “All of the doses of vaccines that went into expiration, they have been discarded.”

“It is as simple as that. Vaccines that have expired are of no more value. It’s unfortunate but Bahamian people’s appetite for Johnson & Johnson was not what we initially expected.

“And so life goes on. We have to continue the vaccination programme and we need to really encourage Bahamians everywhere to get vaccination — those who have not — and then for those who want their boosters, our sites are open.”

He said last month: “When the J&J vaccines were purchased, they were purchased by the African platform in conjunction with CARICOM and we paid a deposit of $45k. The aim was for the vaccine to be utilised, especially in the Family Islands, the prison, detention centre and facilities like that.

“My records would reflect that they were only utilising about 30 per week, which meant that if you did the calculation, they were doing about 4.2 J&J vaccines per day. Just reviewing that would inform them that they would run into serious problems.

“If they were monitoring this properly, they would have made contact with other nations that have J&J, see where their expiration dates are and do an exchange as opposed to throwing away the taxpayers’ money, with us having already paid $45k as deposit and that was only 15 percent deposit, with more outstanding monies to be paid and possibly 20,000 vaccines to be thrown away.”

Stop buying vaccines. The masterminds of the pandemic will soon end it.

What Drugs are officially authorized in The Bahamas, to treat Covid. (Vaccinated and Unvaccinated) What drugs are being used in the hospital or at he doctor's office?

dump all this crap. read what real doctors say about how Pfizer cheated us

It's a shocking example of an opportunity time lost to not have thought spoken with Comrade Mrs. Sister Kim Aranha, de president of Colony's Humane Society (CHS), before de 20,000 Johnson & Johnson vaccines, would've faced imminent expiration about donating de stockpile vaccines to mount an appeal for de vaccinations we colony's pets and Pot cakes and everything else like this and that, ― Yes?

EXPIRED MEANS: The harmful contaminations and evil parasites in them are now corroded or dead, they can no longer deliver the intended deadly efficacy to the host.