Govt Should Talk Before Cannabis Legislation 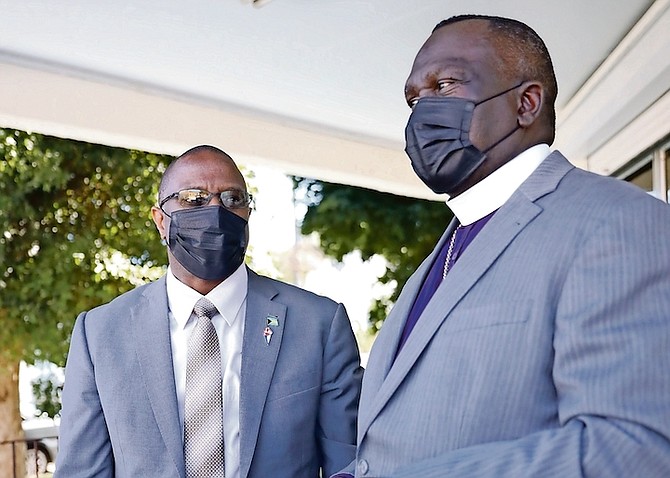 OPPOSITION leader Michael Pintard said the Davis administration should have a conversation with stakeholders before moving forward with their version of cannabis legislation.

His comment came during a press conference after FNM officials met members of the Bahamas Christian Council.

Mr Pintard, who continues to support cannabis reform, said: “We paid the respect to all stakeholders in the cannabis and industrial hemp space by having discussions with all of them prior to us arriving at the legislation that’s already in place in ministries, ready to be introduced to the country and we believe if the government is going to go forward with their version of the development of the cannabis or industrial hemp business, they must have a conversation with the various stakeholders, inclusive of the opposition and the Bahamas Christian Council.”

Asked to clarify what degree of consultation he believes the Davis administration should pursue, Mr Pintard said that depends on what changes are proposed.

“So, for example, we left on the table the amendment of the Dangerous Drugs Act. We looked at the expunging of police records for thousands of Bahamians who were caught with small quantities of marijuana. Thirdly, we prepared legislation relative to developing an industrial hemp business and that is a variety of industrial products that would be created from hemp and then thirdly we looked at medicinal marijuana legislation, so four separate pieces of legislation. We have no idea what the government intends to do and would be helpful if they would share specifically what their intentions are and talk with the various stakeholders in advance of making public pronouncements.”

Bishop Fernander said the meeting with the FNM allowed the council to get clarity from the party on cannabis.

“Even if (cannabis legislation) was left on the table by the previous administration, common courtesy says that we need to know as stakeholders what is going to go to Parliament and what is it that we can agree or disagree on,” he said.

“It might be abundantly clear, hence the conversation with one minister of agriculture and now another, but this is a very powerful special interest movement that the first thing a new government wants to do in an effort to move our economy forward is cannabis,” he added.

“We have to wake up and see that there (is a) powerful movement going on in our society that transcends government and as the Christian Council we will vigorously fight like we did the opposition to certain points of legislation and they were respected. We expect the same out of the government of the day and the common courtesy.

“To take your first shot at legislation and something to help the economy and just try to take it quickly to Parliament without there even being a white paper sends out to stakeholders is different, is not the normal process for which we get legislation of this magnitude done and it can only cause the church to do what we’ve done under previous administrations.

“We will speak loudly. It would be hypocritical to have spoken out during one administration and then be quiet when someone is trying to rush something to be legislation with another administration. No matter who is in the chair as the president of the Christian Council we are going to speak out on that which we feel is not moving in the direction to better the Commonwealth of The Bahamas.”

Both men spoke to reporters after the FNM paid a courtesy call on the Christian Council.

Before the Bahamas Christian Council condemns Cannibas use it should the very least understand that search for its effect on anxiety and pain relief in the brain lead specialties to disvover that the brain has its own production system and receptors named the endo cannibinoid system. By some faith in nature a plant of which the female of the species uses the sun to produce these chemicals responsible for pleasure and relaxation in humans. So scientists also got into the game and created a mock of the God made phyto and created synthetic cannabinoid. Prohibition it was discovered universally lead to gang control, murders and innocent persons being denied human rights and faced total destruction for life. I am Cannibas Certified and will reach out to the BCC. The PLP I believe will cut down violent deaths as has happened in Uruguay. Billions are spent and made with no government control from the 70s. Most industrialized nations have asked the UN to update reclassification of Cannibas. Because no human has died from Marijuana intoxication it does slow the motion and cognitive abilities of individuals and is pain reliever. It is best to never promote its use. Adults over 25 should be allowed to have a legal set amount for personal use. According to PAHO/WHO Marijuana is readily available and prohibition has failed in stopping its use.

Historical, scientific, social and medical evidence on Marijuana use data concludes harms to student learning time and emotional disruption as they tent to take life for a happy joke best spent in a relaxed mode. If the thread continues into work habits the results are the same with delay motor and cognitive abilities resulting in horrible lazy, forgetful, slow work ethics. Just look around. The same is opposite for persons under high stress occupations which could lead to heart attacks in men as it becomes an immediate destresser. Sugars and chocolates have the same calming impacts on the brain of some persons and is one of the most highly addictive substances causing great bodily harms through obesity and diabetes. Addiction has many lens and filters. Dependency on any model altering substance or behavior like gambling is mostly realized through withdrawal symptoms after a person attempts to change their behavior. That is when councilors or diatricians are called in. Cravings for sugars, mine is bad.

How the BCC get a stake holder? We have stake holders in an illegal enterprise that the government needs to consult? Does the BCC want a cut in the business, I mean this just add questions on top of questions. It Make sense now, The BCC just ask for tax breaks and now playing the victim role so they can make a trade we get weed and they get tax break. ALL ABOUT THE MONEY!!!!