Shot Dead As He Rode Motorcycle 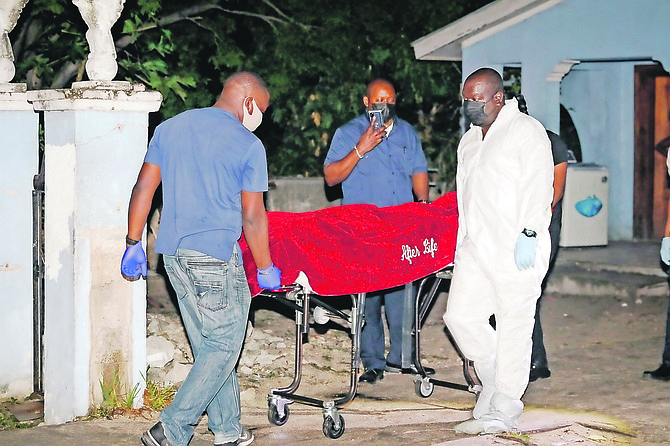 A body is taken from the scene last night. Photo: Donavan McIntosh/Tribune Staff

THE SCENE of the shooting on McQuay Street last night, in which one man was killed and a woman was hospitalised.

A MAN is dead and a woman is in hospital after a shooting incident on McQuay Street last night.

Superintendent of Police Audley Peters said officers responded to reports of gunshots being fired in the area after 7pm.

Upon arrival, police found a man and woman, who had been riding on a motorcycle, suffering from gunshot injuries.

Emergency Medical Services were called and later pronounced the man dead. However, the woman was taken to hospital where she is listed in stable condition. According to Supt Peters, it is not clear what led to the shooting.

However, he confirmed the deceased male was in a relationship with the female victim. They also had a child together, he added.

He said: “Our investigations revealed that male and female were riders of a motorcycle travelling west along McQuay Street when two male suspects emerged from a busy area and produced firearms and shot both victims, where one of the victims succumbed to their injuries and the other is in hospital. We do not know the reason for this incident.”

While police did not release the victim’s identity, sources say the victim is Keith Sweeting, a father of two.

Superintendent of Police Audley Peters speaks to the media at the scene.

Family members and close friends were distraught and inconsolable at last night’s murder scene, with some claiming the victim was set up.

Asked about this yesterday, the police press liaison officer said officers did not want to speculate.

Also asked if police were concerned about a possible retaliation, Supt Peters said: “It is a possibility that there may be a retaliation. However, our officers are on the streets. What has to happen is individuals who are aware of persons brandishing firearms in their community, if they see something they must say something to the police.

“We act on information, and we are at the service of the public. Everyone I’ve said before is a police officer… We can’t be everywhere at one time. We would like to, but we do have people who are everywhere at one time, and they simply have to take personal responsibility when they see something, say something… Don’t be a coward. Be brave. We need you to take action.”

Anyone with information on this killing or any other incident is asked to call police at 502-9991, the nearest police station or Crime Stoppers at 328-TIPS (8477).

“I want to emphasise here that no information is too small or meaningless,” Supt Peters added.

“You might have overheard something and know the history of any one of the individuals on this motorcycle. We will correlate the information in our incident room and put together this puzzle to come to a conclusion as to the cause of the incident.”