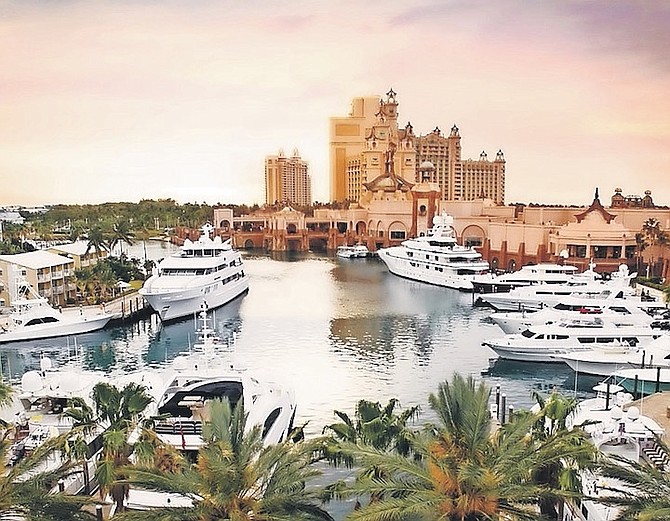 YACHTS in the marina at Atlantis. Developing the yachting sector and perhaps creating a yacht registry is a natural progression of the blue economy, says Diane Phillips.

Elimination of duty is not to make those rich folks with super yachts richer.

Elimination of duty is to create a competitive yacht registry in The Bahamas just as Antigua and Barbuda enjoy in this region or the Marshall Islands, Philippines and Hong Kong benefit from in the Pacific.

A yacht registry, like its sister counterpart, Bahamas Ship Registry, is a natural progression of the blue economy. And why would a country that is 90 percent blue not want to look at its most bountiful resource as potential for growth so long as growing it protects the blue and not just the economy?

No one complained when we created the Bahamas Ship Registry. Officials led delegations around the world promoting it. As it gained traction, we puffed up our shoulders and boasted that ships belonging to companies like Royal Caribbean, Disney, Carnival and Silversea were flagged in The Bahamas.

Once the fastest growing ship registry in the world, we’ve slipped marginally to fifth place, despite the registered tonnage continuing to grow. Meantime, the real growth in the maritime industry or blue economy, the explosive machine, is in the luxury yacht, mega yacht and super yacht market. Fueled by what at times feels like obscene wealth, that market is now worth $8.5 billion in economic activity a year and is projected to grow at a rate of more than five percent over the next eight years.

You can demean it if you wish. Your disgust of the excesses or envy of the unbridled personal service is irrelevant to the reality. That reality is all around you. Boys with their toys, their super fancy floating palaces with heated pools, spiral staircases, spas and garages that house all the water toys money can buy are part of an expanding high net worth crowd that travels the world, including The Bahamas, in ultimate luxury. Registering their vessels in The Bahamas not only builds loyalty towards the country, but creates a myriad of opportunities for services ranging from legal to insurance, consulting to engine repair. It boosts marina operations, shipyards and smaller maintenance facilities. It creates maritime jobs of every calibre from crew to captain though no registry restricts hires to nationals of that country only.

But ignoring that segment of the blue economy that serves the super wealthy - whose rapidly mounting disposable income seems unfathomable - makes about as much sense as a fur coat in The Bahamas in August. And as noted, this is hardly a new, radical or revolutionary idea. A well-written article by Tosheena Robinson-Blair in a 2010 issue of The Investor is titled Bahamas eyes yacht registry overhaul. The subhead - Plans underway to create efficient, top-quality service to lure more mega-rich boat lovers.

But growing the blue economy also requires absolute vigilance. While we gain more, we risk more. Any disrespect of our waters and marine resources should carry hefty penalties, inclusive of fines, imprisonment and community service. That same hand we are willing to hold has a wrist that deserves a stinging slap should it be caught tossing garbage overboard, failing to use an adequate pump-out facility or anchoring on a coral reef.

The concern is greatest in the central and southern islands.

There must be a buoy system throughout the Exuma cays to protect its 365 islands, cays and rocks where freedom to roam cannot equate to freedom to destroy.

In places like Harbour Island or Paradise Island where there are super yacht facilities, the spend on the island is a substantial contributor to the economy. Rental car businesses, taxis, restaurants, shops all benefit. But in the remote islands when there are fewer trips away from the comfort of the air-conditioned super yacht into the settlement and more time is spent on and around the boat or speeding off to a nearby cay for snorkeling or diving, the threat of abuse is greater.

All of which leads to the conclusion that the yacht registry is a two-edged sword weighing in favour of growing it, making good use of the LJM Maritime Academy (and rebuilding the bridge to get to it, please), providing a greater variety of maritime jobs and increasing global awareness of the rare beauty that is The Bahamas. But for all of that, there must be a Lucayan Sea watchdog organisation that does for the waters of this land what Bahamas National Trust does for parks and ORG does for governance. And to date, we do not have that organisation though if all were to pull together and pool resources instead of defending territorial rights and contributor restrictions, we might just have what we need right here at home. If groups have been able to band together for a single cause in the past, they should be able to do so for national monitoring and education along with the RBDF in the future as the yacht registry adds to those enjoying the waters and understanding that to continue to enjoy they must preserve and protect.

There is a lot more science available today about our resources and the behaviour of the animals that live in our waters than there was a decade ago. That, at least, will be in our favour when the Bahamas Yacht Registry comes into full play and all Bahamians enjoy elimination from duty on boats, just like the richest among us. Maybe then, some of the wealthiest Bahamians who have had fine vessels in the country for years but registered them in a company name elsewhere, will finally register them in The Bahamas. That alone would be an achievement even though the poorer among us paid duty within 24 hours of landing a vessel on these shores. I guess it’s true, the rich are different. 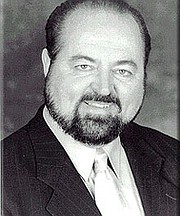 FOR 15 years, you heard the smooth sounds of his voice on Love 97.5 radio.

The show was called Rewind the Rhythm and its host, Jay Michaels, was a natural, inviting you to come along as he introduced a song, interviewed an artist, shared behind the scenes stories with those in every genre of music and production, or just reminded you to get those birthday dates in early so he could be sure not to miss wishing someone a happy birthday on their special day.

Jay Michaels was the kind of DJ who took the music he played seriously, knew the history around it and the story behind it. He was a welcome resting place from the call-ins of talk radio to which all of us are seemingly addicted despite our annoyance with much of it. Jay was different from many. It wasn’t his voice he wanted to hear or his ego he wanted to feed, what made him good at what he did was that he thought of himself as a conduit to link the music and the listener, not the star.

Though he broadcast seamlessly largely from his home in Delray Beach, Florida, he spent a lot of time in The Bahamas. He knew every event coming up in the calendar and on occasion would agree to MC one, especially if it involved charity. The clarity of his tone, the warmth of his message, the resonance of his voice became part of the daily Bahamian culture.

Jay Michaels passed away this month after a lengthy illness. The family at Jones Communications feels the loss. The founder of Bahamas Speed Week Revival remembered him fondly.

“I had kept in touch with Jay and he told me a few weeks ago he had moved back from Vegas to Florida to get treatment so I had feared the worst,” wrote David Mclaughlin. “Jay was a larger than life person and brought fun and laughter to those who crossed his path. He was very much a focal point at the Speed Week Revivals and I recall often that at the end of his auction at the Ball I went on stage and auctioned his cap to raise another $1000 for charity!”

Good night, Jay. Thank you for helping all of us rewind the rhythm. May you rest in peace with your favourite music on forever download.

He did have a very nice voice.