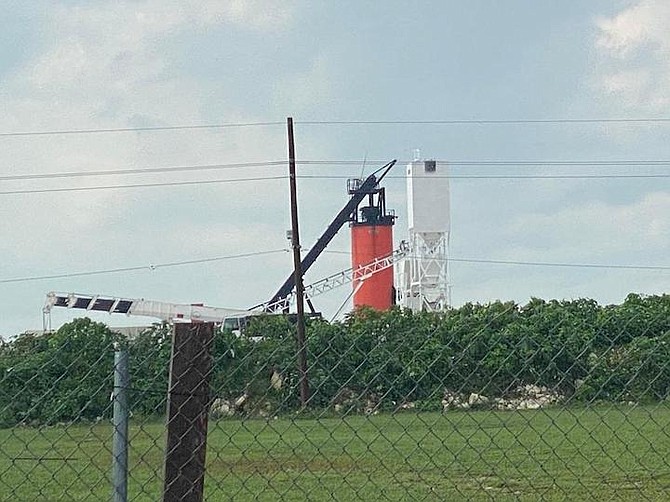 Bahamas Hot Mix’s chairman yesterday said the imminent expansion of its Freeport-based concrete and asphalt production capabilities has “got absolutely nothing to do” with a rival supplier’s troubles.

Anthony Myers told Tribune Business it was “just unfortunate timing” that Gold Rock Rock Corporation is closing two of its concrete-manufacturing divisions to ensure its “long-term survival” amid a shortage of aggregate that represents a key ingredient in its products.

Gold Rock, in a statement to customers and employees (see other article here), blamed the shuttering on the Grand Bahama Port Authority (GBPA) and Grand Bahama Development Company (DevCO) “undercutting its investment” by dragging out talks on a new aggregate supply deal to replace the recently-expired deal. This prompted suggestions that DevCO was negotiating with rival suitors, with several sources pointing to Bahamas Hot Mix.

Given construction and infrastructure demand across The Bahamas, it was suggested that there will be no shortage of players seeking to replace Gold Rock in the concrete manufacturing space. Leonard Sands, the Bahamian Contractors Association’s president, hinted at such a development when he said: “I’ll tell you what I think is going to happen. I can see one of the major construction development companies that will enter the business and replace them.

Mr Myers, though, vehemently rejected any suggestion of a link between his company’s plans and the situation at Gold Rock. Pointing out that it had no interest in securing an aggregate supply deal with DevCO, he added that Bahamas Hot Mix had been licensed to produce concrete and asphalt in Freeport “for years”.

Noting that it had been “pouring thousands and thousands of yards of concrete on a daily basis” at Freeport Container Port during the COVID pandemic, Bahamas Hot Mix’s founder said an expansion of its manufacturing capabilities in the country’s second city was a natural progression given the expected increase in development activity stemming from the Grand Lucayan’s sale, the Carnival cruise port project and other private sector activity.

Mr Myers, stating that the Freeport operation will focus on supplying ready mix concrete and asphalt, and not be involved in concrete block production, told this newspaper: “We’ve been up there producing concrete and asphalt for years. We have a licence to operate up there, we bought a property four to five years ago and have been developing it.

“We’re about to open up. The equipment is just about installed. It’s got absolutely nothing to do with Gold Rock. That’s just unfortunate timing. It’s not got anything to do with us; we don’t have anything to do with it. We bought the land some years ago and have been setting up the plant. It’s no secret that we’ve been doing it. It’s right across the road from Gold Rock.”

Bahamas Hot Mix, which is one of the major infrastructure developers in the country, features several prominent Bahamians on its Board. Peter Andrews, Bahamas Waste’s chair, is its vice-chair while the company’s treasurer is Craig Symonette, head of the Symonette Group and Bahamas Ferries. John Bethell, of Bethell Estates, is company secretary, and another shareholder is the trust for former deputy prime minister, Brent Symonette’s children.

Mr Myers, meanwhile, said Bahamas Hot Mix was alive to the expansion potential of Freeport’s economic rebound. “We’re actively engaged on pouring thousands and thousands of cubic yards of concrete on a daily basis at Freeport Container Port. We’ve been doing that since 2020, 2021,” he told Tribune Business.

“We’ve had two concrete plants up there for several years now. We already have the licence, the staff and the investment up there, so why not go and extend our footprint? This happened before anything occurred at Gold Rock. We’ll be open for business, selling concrete - not blocks, but ready mix - within the next week.

“We’re looking at all the investment and projects going on there. We think Freeport has a great opportunity to expand in the next five to ten years. We see Freeport becoming the industrial hub for The Bahamas, and see a lot of good things being done by Freeport Harbour Company, Freeport Container Port, Hutchison Whampoa, Mediterranean Shipping Company, the Government,” Mr Myers continued.

“We see a large investment down there. In the future, as business expands, we want to be part of that and that’s why we’re investing in an asphalt plant and a concrete plant and looking to do more manufacturing there. Everyone should keep their eye on Freeport. There’s a lot happening.”

Is he kin of thee George Myers ― Yes?