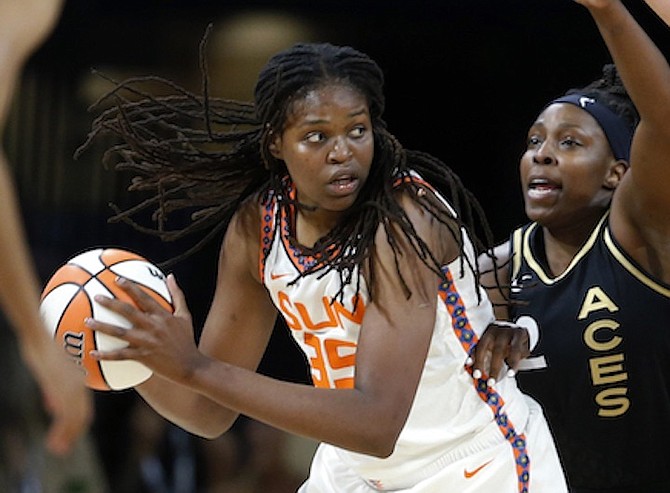 JONQUEL Jones continued her momentum from the WNBA All-Star break and posted her seventh double double of the season.

She finished with 20 points and 14 rebounds as the Sun defeated the Indiana Fever 89-81 yesterday at the Farmer’s Colesium in Indianapolis, Indiana.

The All-Star forward shot 7-15 from the field and also added four blocks and two assists.

Connecticut improved to 15-8 and is now two games back of the Chicago Sky for first place in the Eastern Conference.

The reigning MVP also reached the 2,500 point milestone for her career. She now has a total of 2,517 points.

Jones reached her double-double in the first half with 15 points on 6-13 shooting, 11 boards and three blocks. The Sun used a 9-0 run over the first two quarters - which included six points from Jones - to take control for good.

Connecticut shot 47 percent and outrebounded the Fever 38-26 to get back in the win column after losing four of its previous six games.

Jones also scored five consecutive points on a run to give Connecticut a 34-21 lead.

Connecticut posted a 14.3 point average margin of victory while going 4-0 against the Fever in 2022.

The Sun will remain on the road Friday, July 15 against the Atlanta Dream.

Last weekend, Jones displayed why she is a star among WNBA stars and shined on the brightest stage among the league’s best players at its midseason classic.

She finished with a team high 29 points, 13 rebounds, five assists and two steals, but her Team Stewart lost 134-112 to Team Wilson on July 10 at Wintrust Arena in Chicago, Illinois.

In her fourth All-Star appearance, she shot 11-20 from the field and 5-11 from three-point range. She was the only player in the game to total a double double.

Jones leads the Sun with averages of 14.9 points per game, ranks third in the league with 9.1 rebounds per game, and is tied for fourth in blocks at 1.3 per game.