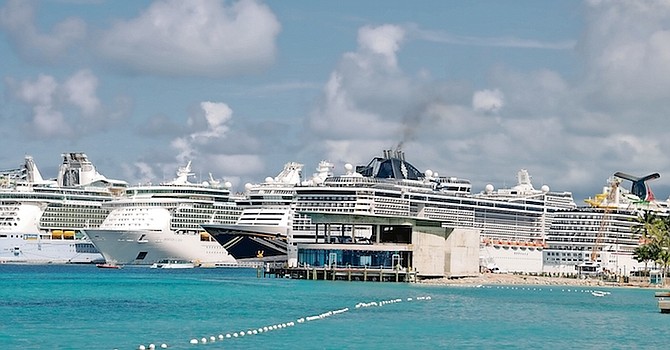 Revealing that the industry is ahead of Nassau Cruise Port’s own projected recovery pace, he added that the full impact of these occupancy levels should be felt by Bay Street and downtown Nassau businesses, plus all sectors that rely on these visitors, from October 1 when the six-month peak winter season kicks in.

Mr Maura said the economic benefit is slightly blunted at present due to the fact that the weekly volume of cruise ship calls traditionally falls by 50 percent during the summer, dropping from around 30 to 20 or slightly less. Still, he added that the cruise port operator is experiencing “occasional” days with six ships in port - bringing as many as 22,000 total passengers - amid ongoing construction work to achieve the facility’s $300m transformation.

With Nassau Cruise Port set to begin handing over retail and restaurant spots to already-selected tenants by November/December this year, Mr Maura also pleaded for “more decorum” in downtown Nassau and an end to physical fights and abusive language in front of visitors that threatens to undermine the post-COVID recovery and efforts to enhance the area.

Warning that “a few bad apples” could spoil it for all, he added that the culprits appear to have “no concern” for the reputation of Bay Street and wider downtown Nassau or the negative perceptions that can be created through social media and word-of-mouth.

Speaking after Mediterranean Shipping Company’s (MSC) bid to acquire Global Ports Holding, the owner of the controlling 49 percent stake in Nassau Cruise Port, was scrapped, Mr Maura told this newspaper: “From an industry recovery perspective for Nassau, when you consider the average occupancy of all ships that called in January was 45 percent, for the month of July to-date, the average occupancy for all ships that have called is 105 percent.

“That rebound has occurred. They’re sailing full. I would tell you that my forecast for between now and the end of the year is that we’ll see our average occupancy climb to 110 percent or higher. I would say pre-COVID the number was about 108-110 percent so by year-end from an occupancy perspective we’ll be at our occupancy benchmark for Nassau.

“We were not forecasting in our budget for 2022 that we would hit 100 percent occupancy for the last half of 2022, so the fact we’re hitting 105 percent for July and seeing steady improvement month-over-month, we’re seeing is a trend of improving occupancy.... Today, I would say we’re back to within five percentage points of pre-pandemic on occupancy.”

Average vessel occupancies for ships calling on Nassau Cruise Port have risen from 45 percent in January, when the industry and entire world were hit by COVID’s Omicron variant, to 54 percent and 71 percent for February and March 2022, respectively. This steadily improving trend continued with 78 percent and 85 percent for April and May, followed by 102 percent for June and now 105 percent for July to-date.

Mr Maura said ships could achieve greater than 100 percent occupancy as this indicator was pegged to “dual occupancy per cabin”. With a family of three, they could all stay in such a cabin and thereby help take occupancy above that percentage threshold.

The Nassau Cruise Port chief also said Saturday’s first-ever call by the Disney Wish on Nassau was “a big deal” for the cruise line as it seeks to recommit itself to The Bahamas with 75 percent of its sailings calling at least once on this country.

With the cruise industry “moving beyond the pandemic for the most part”, Mr Maura said Nassau should feel the full benefit of 100 percent-plus vessel occupancies come October when the winter season starts. Presently, weekly cruise ship calls have dropped by around 50 percent - from as many as 32-33 to anywhere between 18-20 to coincide with the slower summer months.

“That said, two weeks ago, when he had six ships in port, we had 22,000 passengers,” he added. “We are getting the blessing of the occasional six ships calling per day. During those times we see a very material, very significant jump on passenger counts per day. In terms of talking to businesses on Bay Street, they realise the business has improved when they see big spikes.

“Here we are moving towards August, so we have August and September. We’re less than two-and-a-half months away from when the winter season starts and we get 30 ships in per week.” However, Mr Maura said the environment in downtown Nassau still provides cause for concern.

“We still have concerns with some of the decorum in terms of how some elements of our community that are downtown are engaging with our visitors,” he told Tribune Business. “We still have issues with fighting happening downtown, persons using abusive language in front of tourists, Bahamians, shop owners.

“It’s disconcerting after everything we’ve gone through, trying to recover from these two years, and have these few bad apples down there making this whole recovery even harder. Not only are we in need of new businesses and fresh inventory, we need to be better with customer service and how we treat each other in front of our guests.”

Mr Maura said incidents are occurring at “the individual level”, where persons are “scrapping” with one another. “There’s no concern for the reputation of downtown, there’s no concern for the story that our guests are going to post on Facebook, Instagram, or via e-mail or phone call to family and friends considering a visit to Nassau and The Bahamas,” the Nassau Cruise Port chief added. “We need to be mindful the outside world is watching us while in port.”

He said the disputes that were occurring need to be fixed and worked out “behind closed doors in a respectful manner, not through fist fights in front of people screaming at each other”. The Ministry of Tourism, Mr Maura said, was aware of the problems and preparing an initiative designed to upgrade Nassau’s tourism product.

Perhaps Michael Maura would care to explain why decades of great riches enjoyed by the cruise ship industry from its exploitation of our nation's sun, sand and sea has not translated to a better quality of life and standard of living for the Bahamian people.

Thanks to the ruthlessly aggressive business model of the cruise ship industry, our government (public treasury) and our local economy do not even derive sufficient economic benefit from their use of our nation to compensate for all the pollution and other great risks they bring our way.

As I've said many times before, our nation desperately needs to pivot its limited resources away from tourism based on cruise ship visitors to tourism based on air arrival visitors. The latter contribute so much more to our economy.

And by the way, why are Brave Davis, Chester Cooper and Michael Maura all so tight lipped about their Turkish friends, who received such generous investment concessions from our government, planning to abandon the Bahamas by selling their controlling 49% stake in the Nassau Cruise Port to the global container shipping company MCS? Talk about a bait-and-switch transaction! LOL

As a Bahamian shareholder in the Nassau cruise port this recovery is great news. Very pleased with Mr. Maura and how the port is progressing. Excellent job so far.

Do you hate everyone, and in your eyes are all Bahamians crooks? Do you hate to see Bahamians succeed and participate in the wealth creation in their own country? I am more than pleased w the Nassau cruise port offering and CFAL and I dare say I know a great deal more about investing in the Bahamas than you do. Time will tell but every indication is that the cruise port will be a splendid success and with it a very profitable enterprise that thankfully Bahamians have been allowed to participate in.

Yes indeed, time will tell all there is to tell when it comes to your investment in the Bahamas Investment Fund.

I just wanted say why ignore the evidence on Cruise Lines leveraging so much Into we colony's Private Islands by throwing out challenge to the Port's Chief Comrade to produce a single cruise ship's advert's video, which doesn't put focus cruise ship's passengers stopover in colony includes a stopover off ship to cruise liners private island? ... Comrade Michael's version of the full impact of these 110% occupancy levels will be onboard the ship ... The Port's only expectation of their Chief Comrade is to do/say whatever to boost cruise the port's industry profits.... Calling for any, all and sundry government officials/influencers' with direct/indirect (family) Monterey interests in the Port to immediately divest such shares/real estate interest's. ... Profit Leveraging and the intentional dumping disgusting sewage into our sea waters are generational first cousins.― Yes?

Does Maura really believe that just because cruise ships are full it translates into economics downtown? If so, then he needs to explain where that economics has been all these years!

The meaning of 'hustle and bustle' promotes attractions are going on Downtown ― Yes?