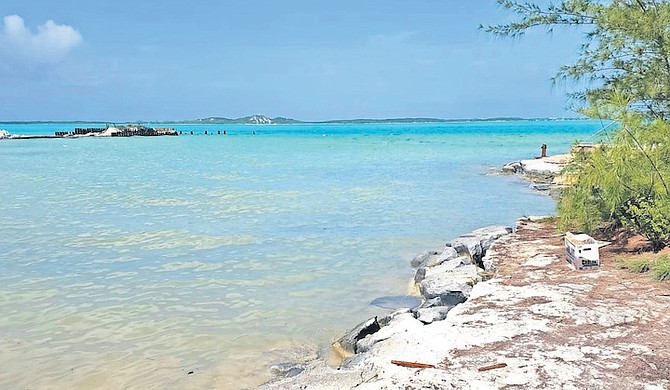 A DAY later, the water in Exuma is already looking a lot clearer after 20,000 gallons of fuel have been removed.

AN ESTIMATED 20,000 gallons of fuel have been recovered from waters in Exuma following Wednesday’s oil spill in the area, according to the director of environmental planning and protection department yesterday.

Dr Rhianna Neely-Murphy, director of environmental planning and protection, told The Tribune that officials expect clean-up crews to have the remaining diesel removed from the area either late yesterday or early today.

“Removal activities continued throughout the night,” she said. “They stopped around 2 o’clock this morning and started again around 5am.”

“So, we have removed approximately 20,000 gallons of fuel from the area and the booms remain intact to keep the fuel contained.

“There is visibly less fuel in the water. We expect that the majority of the remaining fuel should be removed from the site between this afternoon and tomorrow and then we will continue with the remediation activities.”

According to Tourism, Investment and Aviation Minister Chester Cooper, the removed oil will be transported to Bahamas Power and Light Clifton Pier station for processing.

“It was a very tragic set of events,” Mr Cooper, who is also the Exuma and Ragged Island MP, said. “We were fortunate that it was contained, but we have an obligation to ensure that this sort of thing doesn’t keep happening and the government through all of its arms will make sure we manage this process a little bit better going forward in the future.”

The leakage happened sometime between Tuesday afternoon and early Wednesday morning when a vessel contracted by Sun Oil – The Arabian - was offloading fuel to BPL at George Town.

Officials said 35,000 gallons of diesel was spilled into the island’s waters as a result of a “breach in the hose” that ran from the supply ship.

Following the incident, multiple Cabinet ministers and government officials raced to Exuma to assess the site of the oil spill and its impact.

“Sand will be removed. It will be air rated and cleaned as best as possible and if it’s able to be returned to the site, we will do so. If not, it will be landfills,” Dr Neely Murphy said as she gave an update on recovery efforts yesterday.

“Once we’ve finished removing the oil that is still in the water, we’ll have a better idea of what the sand looks like underneath that. I think it’s low tide now and I think we’ll try to remove as much of it as possible to get a headstart on that,” said Dr Murphy.

“But, remediation activities will extend beyond the beach itself. We have to actually conduct ecological site assessments that would have begun today (Thursday) to see how much of the ecosystem has been impacted.”

Housing and Transport Minister JoBeth Coleby-Davis said on Wednesday the question of penalties would eventually be looked at during a meeting with relevant stakeholders.

“That matter would be dealt with in partnership with the Ministry of the Environment and also the Office of the Attorney General,” she told reporters while on Exuma.

For her part, Dr Neely-Murphy said environment officials will not be able to make a definitive decision on the matter until investigations have been completed.

“According to the legislation, the government, of course, has a duty to pursue this so we will continue the investigation into exactly what happened,” she said.

“But, yes, the government has a mandate to go after polluters and that is what we intend to do.”

As for the clean-up costs, Dr Neely-Murphy was unable to say, but noted it will largely be paid “by the contractor.”

In a statement, Sun Oil confirmed that the vessel MT Arabian, owned by D&T Shipping, discovered a leak during the discharging process and activated its crisis management protocol shortly afterwards.

The company further stated: “Sun Oil cares about our environment and commits to providing additional relevant information regarding this incident. Local media will be briefed further as we have access to more details.”

According to Tourism, Investment and Aviation Minister Chester Cooper, the removed oil will be transported to Bahamas Power and Light Clifton Pier station for processing.

Exactly who is paying for the clean-up effort? Is our government funding these costs for the very wealthy FOCOL/Sun Oil Group?

And why is BPL taking possession of the spilled oil that has been contaminated by seawater? Also why is BPL incurring the costs of transporting the contaminated oil to its Clifton Pier station where it will presumably also incur the costs of re-processing it, i.e., cleaning it up, for use?

These are not things you would expect BPL to be doing without having first obtained FOCOL/Sun Oil's agreement to reimburse it for all costs incurred in connection with the latter's failure to deliver the oil to BPL's Exuma storage terminal in accordance with the DAT (Delivery at Terminal) terms of the transaction invoice for the sale/purchase of the oil.

Truth be told, the Shell/FOCOL/Sun Oil Group has considerably more resources available to it to ensure this oil spill mess is properly cleaned-up. Our government should simply be ensuring by oversight that the mess gets cleaned-up as expeditiously as possible at FOCOL/Sun Oil's expense given that they are the party that contracted with D&T shipping for the MT Arabian to deliver the oil under invoiced DAT trade terms.

'Multiple cabinet ministers and government officials raced to Exuma to assess the site of the oil spill and its impact' - why so many who have little to no knowledge,,, was it a free trip so that they could all have a look, nod their heads at each other and say 'Yes, it looks like an oil spill'?

Booms appear to have been removed so spilled oil not recovered could float out to sea. New sand appears to have been barged in to cover-up the sea floor and sea shore mess left by the spilled oil.

Is the public being left with the impression that what can't be seen poses no threat or harm to the environment?

Are the more reputable environmentalists satisfied with the progress of the clean-up effort to date, or is this going to be just another unfinished clean-up effort as is the case with the Equinor oil spill?