INSIGHT: What lessons will be learned from Exuma diesel spill? 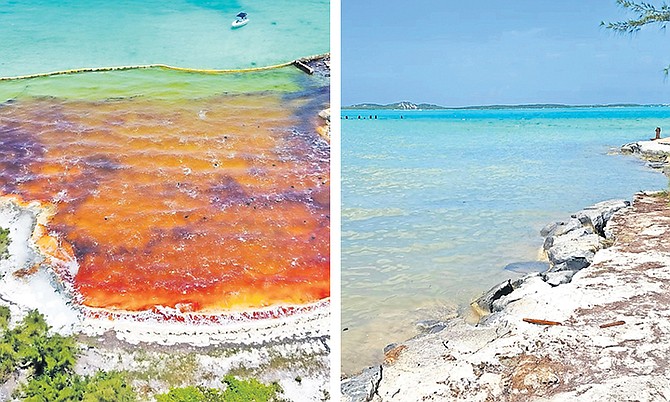 EXUMA after the diesel spill, left, and, right, after the clean-up effort began.

THE diesel spill at the Old Navy Base cove last week turned all eyes on Exuma – and once more brought the discussion about how well we are protecting our environment to the fore.

In many ways, it feels like it’s too soon to talk about everything surrounding the Exuma situation – we still need to know a lot more about how the spill happened, and what repercussions there will be for those involved.

It is encouraging, though, to see two things – first, the speed at which the clean-up has begun, and secondly, the seriousness with which the matter appears to be being treated.

Starting with the first of those, within two days, more than 80 percent of the spill had been removed, we are told, with no further spillage along to adjacent coves and bays. Some of that will have been the easy part of the clean-up where the fuel was still on the surface and hadn’t seeped into cracks or hard to clear places. But still, it shows that the clean-up operation was ready to swing into action, containing the pollution where it was and removing it swiftly.

It was also announced the cove with remain closed until August 10 as the clean-up continues – again encouraging as it shows the clean-up wasn’t just a swoop in for show and then move on. Hopefully, that date will be extended if needed to ensure a full clean-up – but there’s been no evidence so far the spill is being lightly treated.

Which brings us to the second point, the seriousness in which the government reacted.

Deputy Prime Minister Chester Cooper won a lot of praise after his announcement for swiftly travelling to the scene and taking charge.

He doesn’t seem to be in the mood to let anything slide with regard to the incident.

“Should there be penalties? Well, there was recklessness. In my view, there should be penalties,” he told the press.

“We were fortunate that it was contained but we have an obligation to ensure that sort of thing doesn’t keep happening; and the government, through all of its arms, is going to make sure that we manage this process a little bit better going forward in the future.”

How well the penalties currently place will discourage another such event is a different matter.

The problem happened when the MT Arabian was offloading fuel to Bahamas Power and Light. It was supposed to offload 115,000 gallons but 35,000 gallons was missing. Apparently, there was a breach in the hose that ran from the supply ship. Quite how 35,000 gallons could leak unnoticed when people said they could smell it from far away from the scene is a question for investigators. It sounds at the very least as if there was a lack of monitoring during the transfer.

Quite what the recklessness was that Mr Cooper refers to is something again that hopefully the investigation will show.

But the director of the Department of Environmental Planning and Protection, Dr Rhianna Neely-Murphy, in saying that the cove was “almost back to normal” said: “According to the legislation, there are options for just illegal discharge and then there are fines. Sun Oil and the companies involved would have to pay for any and all remediation activities that the government would have paid for up until this point and those moving into the future, so those will be court matters.”

What is that fine? Under the DEPP Act from 2019, it’s a maximum fine of $20,000. That amount of money and more has already been spent in dealing with the damage. That fine is tiny even in comparison with the cost of the lost fuel – Sun Oil general manager Clinton Rolle said on Wednesday that the fuel has a value of $4 per gallon, so about $140,000 worth into the sea.

How can we really take seriously our system of fines when the cost is so low to the polluter that it is outweighed by the lost fuel itself? 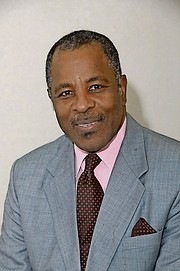 There was another concern that might have been lost in the mix during the spill – the chairman of FOCOL Holdings, Sir Franklyn Wilson, said Sun Oil was “investigating” whether the company contracted for the delivery had the necessary insurance. Shouldn’t that have been known before one drop of fuel was loaded onto the vessel? If I have a car crash, there’s no use in me checking if I’m insured after I run into another vehicle – you need to know that before you put the key in the ignition.

Surely as part of the hiring process, Sun Oil should have required the contractor to send a copy of the valid insurance certificate, which they would have on file the moment anything went wrong. For that matter, and this is something beyond my knowledge, is it Sun Oil that should have the insurance or the contractor they hire? These are matters that should be picked through in legal proceedings.

It is encouraging though that there is talk of such legal proceedings and of fines being applied. They may not be enough, but it doesn’t seem as if such obligations are being shirked.

Credit to Sun Oil for stepping up and putting resources in play to deal with the clean-up, and to pledge to “do whatever’s necessary to stop it happening again”.

We got lucky in many ways with this spill – with its location, with the tides, with the wind. We can’t trust to get lucky next time. If there are lessons to be learned, we must learn them. If there is recklessness involved, the penalties must be severe enough to discourage such a casual approach to handling a potential pollutant.

If that means revising the penalties that can be imposed under the law, so be it.

As I said earlier, it feels too soon to draw too strong conclusions over what comes next as a result of this spill – but we do need to learn from it. It shouldn’t just become a footnote that we never hear about again. It will be interesting to revisit the situation once the investigation is complete – and once any court cases begin.

Did the hose really break or was it improperly attached and/or left unattended. Sometimes things that are supposed to be routine are not so routine and can easily spell disaster. But at the end of the day, someone has to stand responsible. Don’t forget all the oil that was spilled on Grand Bahama during the hurricane. Did the Bahamian government or the people f the Bahamas receive one single red cent in compensation or even a single word of apology?

No lessons will be learned and the government will probably form some new committee or agency and get at 10-20 more people on the government payroll.

There’s a reason people don’t allow glass glasses around pools…same principle here - continue carry petrochemical products over our beautiful waters to dozens of oil and diesel burning generators scattered around the country then eventually it will happen - the glass will break and painful splinters will be scattered throughout the ecosystem…time to go solar peeps..no glasses by the pool - it’s the only one we ‘ve got..let’s not f’ it up.

While the oil spill has been unique because of its visibility and potential to damage the environment (e.g., if the wind were blowing from a different direction and it didn't end up confined in the small cove), it is by no means unique in terms of environmental disruption. For example, dozens of BEC transformers were dumped on the same property and the waterfront just to the east has for years been a dumping ground for dozens and dozens of old vehicles. Further, for decades, many backroads of Exuma contain illegal dump sites that are still in use today -- cars, construction debris, household items; you name it. Aside from being unsightly, many of these discarded items contain hazardous material that eventually leaks into what little groundwater the island has. Photos are from different dump locations.

This news story is nothing but an absurdity of misinformation for the benefit of the very greedy Franky Wilson a/k/a Snake. One has to wonder if Malcolm Strachan, like Rhianna Neely-Murphy, is a good friend of Snake.

Just stop and think about it for a moment.

Just about every day we have some of the world's largest tankers and cruise ships plying through our territorial waters loaded with environmentally toxic oil, gas and other dangerous contaminants. And representatives of our cruel Davis led corrupt PLP government would have us all believe our small nation can only impose insignificant penalties whenever these vessels are found to have caused a serious environmental disaster. That's patently untrue and ridiculous to say the least!

Not too long ago the State of Florida was able to collect many millions of dollars in fines and penalties from Carnival cruise lines for their recalcitrant conduct in not preventing the dumping of tons of toxic bilge contaminants and raw shiit that polluted the coastal areas of Florida frequented by many tourists and Floridians alike.

Our nation already has legislation and regulations that allow our government to impose very hefty fines and penalties commensurate with not only the environmental damage done but also the egregious nature and severity of the violations of existing laws and regulations which undoubtedly would have greatly contributed to the disaster in the first place.

In other words, there is no need at all for our government to instigate or initiate a court proceeding to do what it is already fully empowered to do under existing laws and regulations. And the very hefty penalties and fines certainly do appear to be warranted in this case given what has already come to light about the egregious nature and severity of the violations of existing laws and regulations which undoubtedly greatly contributed to this major environmental disaster. For starters, it appears Shell/FOCOL/Sun Oil, as the contractor of the MT Arabian, failed to verify the vessel was properly registered and had adequate and/or valid insurance coverage for the contracted oil delivery. And that's just for starters!

Is cruel and corrupt Davis planning to let the FOCOL/Sun Oil enterprises controlled by his good buddy Sir Snake off the hook? Are the Bahamian people to be once again short-changed because the very greedy Snake has been a well-known financial backer of the PLP political ruling class for many years?

The many disgruntled members of our civil workforce who are constantly being told by cruel Davis and his corrupt cabinet members that they must go without because there is no money in the public treasury certainly have a fundamental right to know the answers to these and many other such questions.