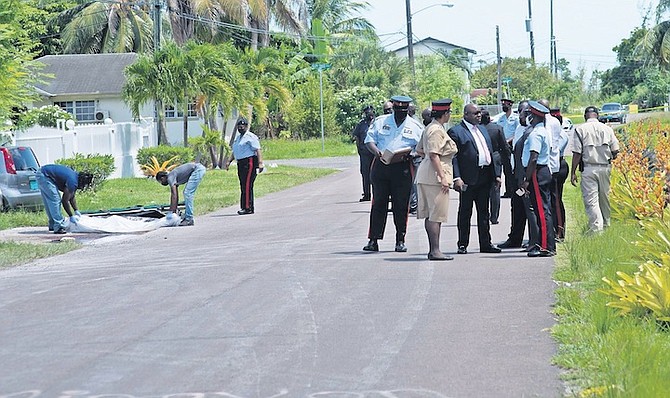 AN ARMED man was accidentally shot and killed by his co-assailant after they attempted to kill another man in Pinewood Gardens yesterday.

“We understand that two of the males exited the vehicle with the intention of harming a male resident of the home that is just south of Ficus Street,” she said. “It is reported that two males who exited the vehicles with handguns discharged the shots at the intended target who was able to evade them and during the time that they were firing shots at the intended target, they accidentally shot one of the males that came with them to this residence,” she said.

Police said the victim, who is believed to be in his early 20s, died of his injuries at the scene.

Police have in custody two males along with the intended target, as he is said to be assisting police in investigating this particular matter.

When asked by reporters about any concerns about violence in this area, Skippings said: “We’re actually concerned about the level of crime in The Bahamas in general and so we want to appeal to residents. You know exactly who your family members have conflicts with, and, as I said, I stand here with chief superintendent Johnson, I’m going to ask you as a mother, as a grandmother, reach out to chief superintendent Johnson and the team at the criminal investigations department so that we can resolve these issues.”

“If we fail to sit down and have a conversation with these individuals, we will continue as a country to see this carnage on our streets.”

Police are actively investigating the matter.

The three incompetent hired guns in this incident must have been at the very low end of the 'pay-for-hit' scale, i.e., the kind who don't know how to aim and when to shoot.

ROFL! Accidentally shot one of their own. MORON's. What clown's. Dear Gang Leader, please take the weapons back from these losers as they may actually end up shooting you if they get too excited. And by the way... the guy who shot his buddy is the one that really insists that he didn't do it - and then has that blank stare when he thinks no one is looking at him.

Need to nominate him for the Darwin Awards.

Too stupid to live.