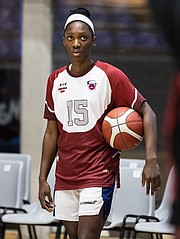 LASHANN Higgs will remain in Spain this upcoming season but will sign with Hozono Global Jairis for the 2022-2023 campaign of the country’s second division of women’s basketball.

LASHANN Higgs will remain in Spain this upcoming season but will sign with a new club in the LF Challenge league.

Higgs signed with Hozono Global Jairis for the 2022-2023 campaign of the country’s second division of women’s basketball.

Jairis head coach Lucas Fernández said he has lofty expectations for the impact Higgs will have on the basketball club.

“Lashann Higgs is a player who, within her humility and effort, has a great capacity to generate advantages from her one on one skills, with the ability to finish, to assist, and with great physical abilities in defence,” he said.

“She is a player who from the beginning has shown us great enthusiasm for joining our team and who I am sure will work hard to offer us her best version.”

“From the club, we welcome Lashann to Alcantarilla and we hope that her adaptation will be the best possible,” Fernández said. “We have no doubt that she will bring all of her quality, effectiveness, and experience to this exciting season ahead.”

A release from the club describes the 26-year-old guard as: “A very physical and explosive player, extraordinary in the open court and on the run and with a good shot from the perimeter. She is also very versatile and, being able to occupy the positions of both guard positions.”

Higgs spent her rookie season of pro basketball with Bembibre PDM in the Liga Femenina Endesa - the top division.

Higgs, the team’s most valuable player, earned several Player of the Week honours and finished as the third leading scorer in the league at 15.8 points per game on 54 percent shooting from the field. She also shot 33 percent from three-point range, 76 percent from the free throw line and was third on the team at 4.2 rebounds per game.

The Harbour Island native made the move to Germany the following season. She played just two games with Rutronik Stars Keltern Damen-Basketball-Bundesliga (DBBL), the premier women’s basketball league in Germany.

Higgs averaged just 10.5 minutes per game in the two contests and scored 3.5 points per game for a Rutronik team that claimed the 2020-21 title with a 21-3 regular season record and an undefeated 7-0 run in the playoffs.

She spent last season with Lointek Gernika Bizkaia of Liga Femenina Endesa. In 25 games she averaged 9.8 points, 2.6 rebounds and 1.3 assists per game.

She played in 137 games as a Texas Longhorn with 52 as a starter. She ranked as the seventh all-time in the Longhorns’ history for games played and 28th in career points scored with a total of 1,288.