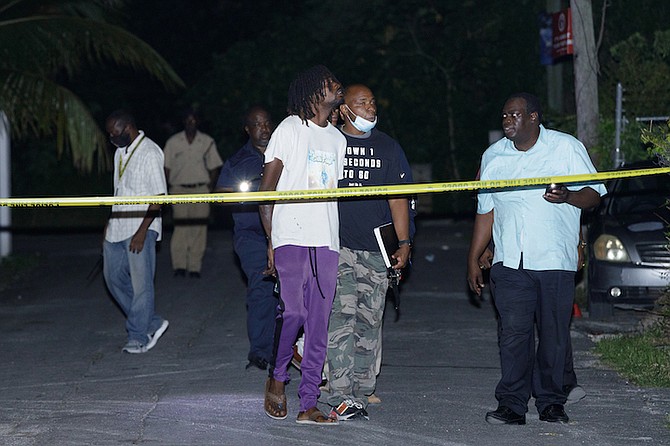 POLICE investigate the shooting incident in the area of Fleming Street that led to the death of a young boy. Officers are pictured with the reported brother of the victim. Photo: Austin Fernander 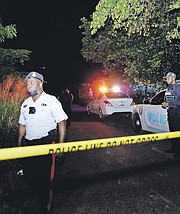 POLICE investigate the circumstances surrounding a shooting incident in the area of Fleming Street that led to the death of a minor. Photos: Austin Fernander

A CHILD was killed in a shooting incident last night – one of three incidents that claimed the life of at least one other man.

Police had not released further details of the incidents last night – but officers reported that the child was shot in Fleming Street, at about 10pm. The child was taken to hospital, but police reported that he had succumbed to his injuries.

No identification was made by police, but social media users paid tribute to a boy named Kenton and posted pictures of him after the shooting.

This shooting followed another double shooting in Yellow Elder Gardens, again at about 10pm. No details of injuries were available late last night.

This was the third shooting within hours – after another man was shot at about 5.25pm at West and South Streets. He was taken to hospital by private vehicle but later died of his wounds.

Police had no further details available in any of these incidents at the time of going to press.

Don't expect to get the truth about the killing of this young boy from cruel Davis's buddy, the teary-eyed incompetent Commissioner Fernander.

Incompetent pretty much sums up the entire police force.

What does the police have to do with one individual turning a gun or a knife on another individual? How about blaming the individual for a change. Stop blaming police and government officials for the actions of others! Blame the perpetrators!

Unfortunately, our incompetent police officials are well known to botch-up the evidence gathering process and all too frequently fail to make an appearance in court as if deliberately seeking to achieve a desired acquittal outcome for the charged criminal.

Evidence gathering is a part of the investigative process. It’s considered a retrospective action. And like I said earlier, police officers can only act in RETROSPECT when it comes murder. You, and others like you are choosing to focus on the secondary and tertiary issues rather than focusing on the primary issues. How can people blame the police if you decide to pick up a gun and shoot me??? That’s foolishness.

Why do you always tend to blame politicians and police for our high crime rate? Crime is a social problem inwhich much of the blame rests with the general public residing in the Bahamas. We the people are responsible for crime, not the government! Citizens of the Bahamas have a duty and responsibility to obey the law. Police officers and government leaders can only operate in retrospect to criminal activity by arresting, prosecuting and convicting criminals.

Put the blame where it belongs!! We the people are responsible for crime!!

Bahamas governments ARE a social problem. Put blame where it belongs.

Correction. Inadequate government is considered a POLITICAL problem not a social problem. Civics and politics are two different entities.

Rampant out-of-control crime in a nation typically results from decades of unchecked government corruption by members of an elitist political ruling class who favour political power and the accumulation of great personal wealth at the expense of sound economic and social policies for the benefit of the citizenry. That's just a simple fact, but you're certainly entitled to whatever views you may hold about the bigger picture behind our country's dire violent crime situation.

While the government does deserve it’s fair share of blame for many of the social ills that we face in our country; one individual deciding to murder another individual isn’t one of them.

Behavioural science is littered with studies proving that even the most right minded individuals who have been subjected to long enough periods of severe hardship are prone to breaking down and doing things no rational individual would do.

And a lot of that behavioural science has been used as the basis for the insanity plea as well as designing more effective torture programs. It is therefore no small wonder that so many people in our society who have been subjected to abject poverty most of their life have become dangerously whacko in the head!

Vigilantism is in your midst,

New World Order - population control. Shut down the food and fuel supply and they will go crazy and kill each other.

‘I the beginning of creation, God bequeathed to mankind a world of perfection and peace where humans are expected to live in harmony with one another.’ Fast-forward to the present world of today, and you will see that it is a complete contrast to God’s initial plan. We see a world plunged in utter chaos, crime and turmoil, among others. The reason for these transformations is not far fetched

In fact, it is in fulfilment of the scriptures that as the earth grows near its dying days, the world would be thrown into utter peril (2 Timothy 3:1). It went further to give an apt description of the evil to be perpetrated by mankind.

Let’s take a look at the unprecedented height of immorality in the society today: incest between relatives, legalisation of homosexuality and abortion in many countries, traitors, persecutors, despisers etc. Flagrant disobedience by children to parents and constituted authorities, increase rate of cultism among the younger generation, drug abuse, alcohol and all manner of addictions. Blasphemers of the church of God, and that which saddens me most is the recent spate of money ritual going rife among today’s youths. Every single of these variables are perfect fulfilment of the scriptures, indicating that the world is in its twilight.

We have to be reminded that no one is immune to the sin and peril of the last days, because we are all offspring and descendants of the first man, who by virtue of their disobedience in the Garden of Eden passed that seed of sin and wickedness down through generation. The only one true way we can be free and insulated from these evils is through Jesus Christ, Who was conceived not by man but by the inspiration of the Holy Spirit.

It is pertinent to make that decision to ensure your safety here in the world and assurance of a Joyous eternity with the Lord. There is basically no fun and reward in a life of sin, as it breeds only guilt, death and eternal anguish (Ezekiel 18:20). Would you rather continue in sin, living with the guilt it brings? Would you lose eternal happiness or embrace salvation and enjoy peace of mind, safety in the Lord and ultimately fellowship with Our Lord in eternity? Christ died for our sins (1st Corinthians 15:3) His blood was shed for our sake (Matthew 26:28) It is the only way known to man to escape the dangers of this present world and a place in glorious eternity. Wouldn’t you rather do the needful now? Go on your knees and bare all to Christ, repent of your sins. (Act 3:19) Be committed to your decision and you shall continue to have victory, peace of mind and joy of a place in heavenly eternity.’

ZZZZZZZZzzzzzzz......and that's without reading one word of whatever you wrote. LMAO

Keep giving all the blue collar jobs to Haitians, Latinos, and Asians, forcing Bahamians to turn to criminal activity and this problem will continue to fester!

That's not it. Its the love of money that's driving them. They dont want a blue collar job. They want what Sebas have, he was a criminal for most of his career, made his riches from crime and now look at him, they want be on facebook like Adrian Fox throwing money up in the air and bragging about their yacht. Fox was convicted of running smuggling operations now look at him. Giving them a 250 dollar job a week wont change them. Changing their heart and mind will change them.

And to think cruel and corrupt Davis appointed that criminal thug Sebas Bastian to a diplomatic post within the CARICOM community and now addresses him as "His Excellency".

The wealthy elite are supported by the political class. Sometimes, they are one and the same. The underclass will always be blamed for social dysfunction and crime (Cobalt). And the elite will disingenuously seek to provide "programs" to reform them.

There's validity in both arguments.