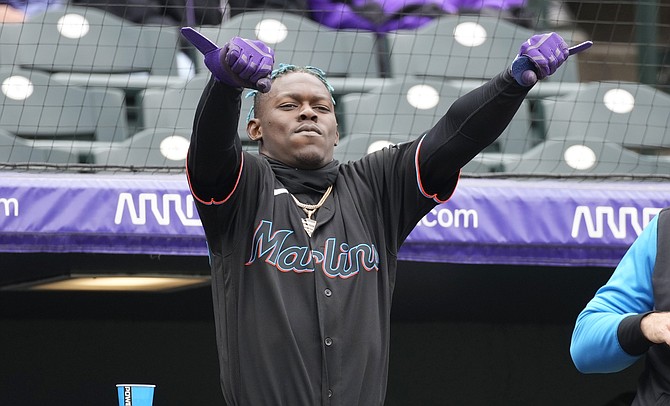 MIAMI Marlins’ Jazz Chisholm Jr gestures to Avisail Garcia after he hit an RBI-single off Colorado Rockies starting pitcher Antonio Senzatela in the fourth inning of the first game of a baseball doubleheader yesterday in Denver. (AP Photo/David Zalubowski)

After two hitless games since his return from a hamstring injury, Jasrado “Jazz” Chisholm Jr was the catalyst of a Miami Marlins offensive explosion in the first game of yesterday’s double header.

Chisholm drove in the first four runs of the Marlins 14-1 win over the Colorado Rockies in game one yesterday at Coors Field in Denver, Colorado.

He finished 2-5 with four RBI. Chisholm got the scoring going with his RBI single in the second inning. He followed with his eighth home run of the season in the fourth inning to give the Marlins a 4-0 lead.

After missing four games with a hamstring injury, Chisholm returned on May 29 in a 6-3 loss to the Atlanta Braves in the series finale at Truist Park in Atlanta, Georgia.

On May 30 the Marlins’ offence again struggled in a 7-1 loss to the Rockies in the opening game of the series.

Chisholm still leads the Marlins in several categories with a .276 average, 31 RBI, 22 runs, four triples and seven stolen bases. He ranks second on the team with eight home runs and is third with 38 hits and seven doubles.

The Marlins travel to San Francisco to open their three game series against the Giants at Oracle Park. First pitch is set for 6:40pm local time.