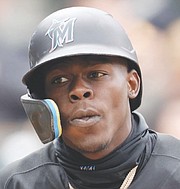 After Jazz Chisholm and the Miami Marlins split a four game series against Antoan RIchardson and the San Francisco Giants last week, the Marlins will now host Lucius Fox and the Washington Nationals in a three-game series this week at loanDepot Park in Miami, Florida.

The Marlins opened with a 3-0 win Thursday night, following by the Giants’ 15-6 win on Friday.

Miami rallied for a 5-4 win on Saturday before San Francisco concluded the series with a 5-1 win Sunday.

The Marlins and Nationals begin the three-game series with the Washington Nationals tomorrow night. First pitch is at 6:40pm. Fox was called up to the Nationals from the Triple-A level with the Rochester Red Wings on June 3 and returned to the roster of the big league club for the first time since May 1. He made his historic MLB debut on April 10 and spent 10 games with the Nationals before he was assigned to the Red Wings.

In April 2021, when the Marlins hosted the Giants for a three game series it marked the first time a Bahamian player and a Bahamian coach shared the same field in an MLB game.

“We’re closing the gap,” Richardson told Evan Webeck of Mercury News following the most recent series, “The Jazz Chisholms of the world inspired me as a player. It was really important to keep going because I wanted them to have a visual of someone playing professional baseball. I wanted them to see that hey, this is real for people like me. That’s really where I found inspiration.”

Chisholm also added that seeing Richardson break through to the Major League level served as an inspiration to what was then a group of teenagers as they prepared for a professional baseball career.

“(Richardson) definitely did do that. I have to give him that for sure. He definitely gave us the hope to believe that we can make it. He’s the one who inspired all of us that’s coming up right now,” Chisholm said of Richardson’s impact, “He was basically a big brother.I didn’t have all the money in the world. I couldn’t afford to keep getting wood bats that were gonna break. … The easiest resource was to ask him.”

On April 27 this season, Chisholm and Fox became the first pair of Bahamas-born players to appear in the same Major League Baseball game since 1961 when the Nationals Park in Washington DC.

According to the Elias Sports Bureau, the only other pair of Bahamians to play in the same game were Andre Rodgers and Tony Curry, who faced each other six times during the 1960 and 1961 seasons.

“Just to do it with Jazz means a lot. We spoke about this moment from when we were kids when we started playing baseball,” Fox told the Washington Post following the historic game, “I don’t take it as pressure, I take it as pride, I get a lot of support from the people back home. And just making it at this level is a big deal for us. So I’m proud of what we’ve done so far and looking forward to doing many more great things in the future with this game.”

Both players were members of the 2015 International Signing Class.

“He’s just like a big brother to me. The love I have for Lucius is just like anyone else who’s my blood,” Chisholm said about Fox before he reflected on the moment, “I feel like, for us, it’s super important. Just to show the kids that anybody could do it. We always go back, we always go home and talk to the kids and be like, ‘Bro, we’re from the same place you are.’”

There are currently 24 Bahamians in the minor league baseball system.

“We’re just a small country that really loves people and loves each other and that’s why we play the game,” Richardson said. “I’m really excited I get to watch these young people go after their dreams and be bold about it, because that just wasn’t the case 10 or 15 years ago.”