DIANE PHILLIPS: Green high-top Converse a symbol of pain too much to bear 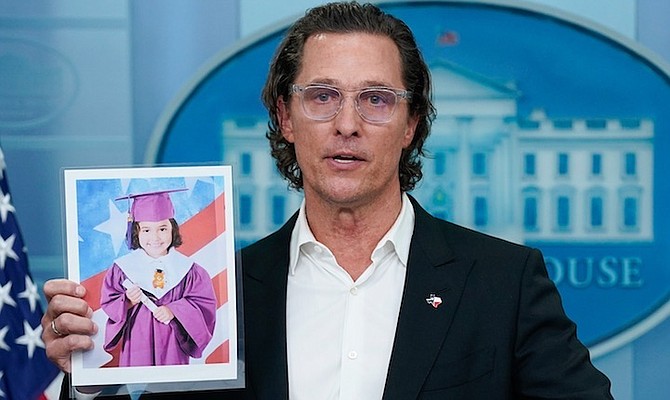 ACTOR Matthew McConaughey holds a picture or Alithia Ramirez, 10, who was killed in the mass shooting at an elementary school in Uvalde, Texas, as he speaks during a press briefing at the White House. 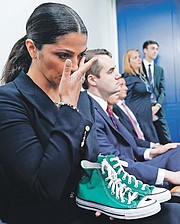 For a moment last Tuesday, Mathew McConaughey could have run for and been elected President of the United States. For a moment, the Oscar-winning actor took us all where we needed to be – in the heart of Uvalde, Texas where on May 24, a deranged 18-year-old brandishing an AR15 walked into an elementary school and for 40 minutes before the SWAT team arrived went on a killing spree, leaving 19 children and two teachers dead.

The actor spoke at the White House on gun responsibility, trying to make sense out of the senseless killing of those 19 innocent children in grades three and four in that little town in Texas called Uvalde, the same town where McConaughey was born. McConaughey and his wife went to Uvalde. They spoke with parents of the slain children who had gone to school that morning like any other morning with dreams of what they wanted to do when they grew up. With misty eyes and choking back emotion, McConaughey called out their names, urging Congress to overcome its divisiveness and unite on a single matter so that the lives of those who died would matter.

Uvalde was personal to him and McConaughey made it personal to the nation, reinforcing the theme “To make the loss of these lives matter”. He held a nation in his hands, his words measured and thoughtful, his performance stunning and heartbreaking. For nearly 20 minutes, he begged and pleaded and urged leaders to enact responsible gun policy. Never once did he hint that the Second Amendment was wrong or was to blame. He’s a Texan who said, instead, that there is a middle ground, and responsible gun owners are “fed up with the Second Amendment being abused and hijacked by some deranged individuals”.

McConaughey started in a calm and measured voice, a voice that sometimes shook with the pain he felt when he talked to the parents who lost their children and the children who lost their friends, the “hollow” third and fourth graders who watched their classmates get slaughtered. McConaughey became one with their pain, one with the little ten-year-old girl who smeared her dead friend’s blood all over her so if the killer came back and saw her he would think she was dead.

McConaughey is an actor, after all, so you expect him to bring his all, but the all he brought was beyond Oscar-winning performance. It erupted from the heart and the gut and the urgency that America is at a crossroads, on the verge of losing its place as the country the world looks up to and becoming the country the world no longer understands.

His performance was so powerful that TV channels got wind of it and roadblocked their regular shows, even CNN tuning out whatever was on to tune in to whatever message McConaughey was delivering. Al Jazeera carried it live. And when McConaughey’s voice rose and he held up a pair of green high top Converse shoes with a heart on the toe of the right shoe, a heart like the one little Maite Rodriguez had hand-painted on the pair she wore every day to school before her body was obliterated by an MR-15 automatic weapon in the hands of an 18-year-old who should never have been able to purchase a weapon of war and take it into a classroom of little children, McConaughey delivered the performance of his life.

No writer could have scripted more dramatic lines. How do you write a script of bodies so mutilated that they can only be identified by their DNA or what was left of the green high top Converse sneakers worn by a ten-year-old who only wanted to grow up to be a marine biologist and live by the ocean she wanted to protect?

I suppose that those sneakers will become a symbol of sorts for a movement toward responsible gun policy. If they do, if Congress can get over the partisanship that has divided a nation and unite on a single issue that will help make America’s schools, churches, grocery stores, hospitals and neighbourhoods safe again, then maybe the loss of those lives will matter.

All l can say is this and I say it with more sadness than I should.

There was a time I was proud to be American, when I stood if the National Anthem was played at the start of a football game, even if I was watching at home on a Sunday afternoon, just as I stand and sing every word of the far more beautiful Bahamian National Anthem any chance I get and every event I attend. I am blessed to have dual citizenship and I know it.

Maybe my pride in being American was not as deep as my pride in being Bahamian because I had to earn the latter whereas I only had to emerge whole from my mother’s womb to be awarded the former. But I never thought I would feel a sense of shame and that shame would have come close to being unbearable on May 24, the day of Uvalde, a week after Buffalo.

Thank you, Matthew McConaughey, for restoring a glimmer of hope. May your words resonate with those who have the power to make Americans proud of being part of the nation that gave the world so much before the stain started to overshadow the majesty and may we go back to being each other’s keeper. And you can go back to driving that Lincoln, making the simplest car ad on TV the sexiest.

Now, two historic buildings on Cumberland Street that could have been salvaged and become sterling examples of two-story classic Bahamian architecture years ago have finally been torn down, reducing the number assigned to the Dirty Dozen structures in downtown Nassau. It will be interesting to see what goes up in their place.

For the moment, it is a gaping reminder that our real property tax structure rewards those who keep their property values low by lack of maintenance despite location and penalises those whose properties are well-maintained.

Many urban areas have managed to provide incentives for restoration by offering tax exemption for buildings carefully restored.

Quite a few homes and office buildings in Nassau and Eleuthera received up to 20 years tax exemption many years ago when the Special Historic Properties Project Committee was created by the Ministry of Finance.

Perhaps it is time to revive such a committee and authorise it to review carefully, inspect and provide economic benefit analysis. It’s a lot better than watching a building crumble with broken windows, chipped paint and spalling concrete.

We cannot afford to continue depleting our treasure trove of distinct Bahamian architecture. Incentivise and flourish.