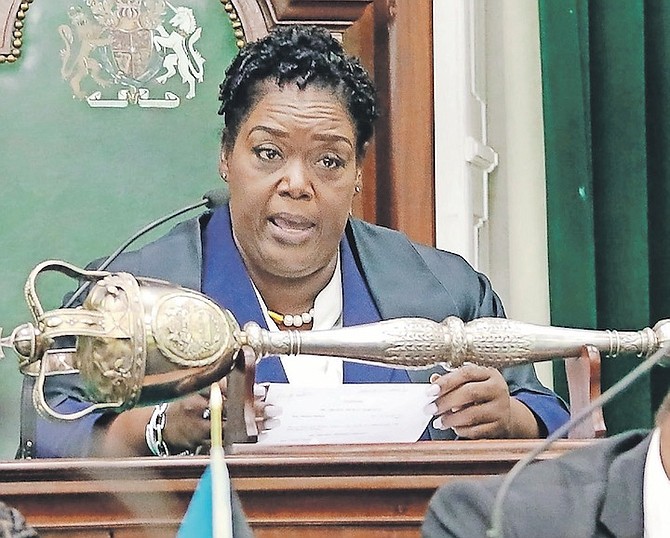 HOUSE Speaker Patricia Deveaux sharply rebuked National Emergency Management Agency director Captain Stephen Russell yesterday, telling him “you need a 9 to 5 job” and suggesting he did not have the same vision as the government to advance the country.

At one point, the Speaker who is also Bamboo Town MP, intimated that Captain Russell was busy at home “watching the game” when she appealed for help.

The Speaker’s lashing of the NEMA official was sparked by her displeasure with Captain Russell’s response to her calls for assistance with damage in her constituency after a tornado touched down in the area on Wednesday.

While she admitted various agencies responded to her calls for help, she singled out NEMA and its director as being absent, adding that when she did speak to Mr Russell he directed her to the Ministry of Works.

Unhappy with the response, Speaker Deveaux said she warned Captain Russell that she would speak on the ordeal from her chair at the next sitting of Parliament.

Contacted yesterday, Captain Russell said he would not comment and directed The Tribune to a statement released by NEMA outlining the sequence of events. The statement sought to prove that throughout the day and for a number of hours, Captain Russell personally remained on the scene was busy working in the aftermath of the tornado.

Myles Laroda, minister with responsibility for NEMA, told the House of Assembly that Captain Russell told him that he was not aware of issues at Bamboo Town. However he summed the issue up as a “complete breakdown” of communication.

Speaker Deveaux said: “… What I did not see on the ground was NEMA and I am saying this because I reached out to Commander Russell... I don’t know if he was home busy watching the game ‘cause I hear they had a game last night, but I could say that he was not there and that is who we have to reach out for emergency response.

“I had senior citizens at the age of 80 who had live wires, electrical wire hanging and also no roof and no electricity last night. They had to go to bed with such damage to their house and what I can say is we had the team on the ground, but NEMA was not present,” she continued.

“Natural disasters do not happen between nine and five. Natural disasters can happen at any time, in the dead of the night and so I say this to say these people if they want a desk job from 9 to 5 give them their desk job cause I had a natural disaster last night and the minister and all of these other persons were on the ground until 9pm last night trying to help me bring some resolve and this morning the Ministry of Social services is sending breakfast out. Thank you, minister, to those persons making sure that they’re having hot meals and we are trying to find some roof to put over their heads as we speak.

“… I reached out to the honourable member for Pinewood (Myles Laroda) and he was very, very helpful with me yesterday, but sometimes we have persons who are on assignment under our umbrellas that do not have the same vision that we have in place to take this country forward. So, I am very disturbed about that and they’ll understand me.

“When it comes to Bamboo Town I don’t second guess and the way those persons had to sleep last night was unbecoming. So, you tell Mr Russell for me if he is listening, let me tell me you ‘you need a 9 to 5 job because I call 7, 8 o’clock in the night you telling me Ministry of Works? The Ministry of Works was already on the ground. They were already on the ground so the only persons that were not present was NEMA. So, I don’t know. They talked about Jesus yesterday fixing it, fix it Jesus.”

For his part, Mr Laroda said he conveyed the Speaker’s displeasure to Captain Russell.

“I had two conversations with the director of NEMA. I conveyed your disappointment. I’m not going to sugar coat it. I let it be known that there were other agencies that turned up, in particular, the Ministry of Works and also the team from social services.

“I was advised and I am just giving the public the record of what happened by Commander Russell that the tornadic activity was in the Cowpen Road area and that’s where NEMA had focused (and) that he was not aware that Bamboo Town had any concerns, that was the message he conveyed to me.”

“I would have said to him,” Mr Laroda continued, “that in speaking to other members that there were at least three communities that were affected.

“After conveying that message I would have spoken to the permanent secretary to convene a meeting sometime today with Commander Russell and the team from NEMA and there will be no stones left unturned with regards to the response.

“I conveyed your message word for word what you had experienced (and) that in particular that it affected two 80-year-old individuals and without going into detail my exact words, if what you are saying was correct and I have no reason not to believe you, that there was a complete breakdown in terms of communication and response.”

Where did the speaker work before taking on this role? I'm guessing either the straw market or Potter's Cay. My next guess would be she was a teacher at some public school?

Her bio as a plp candidate:

She has served as a Senior Executive Secretary in the Ministry of National Security for 30 years, maintaining the administration of the Drug Enforcement Unit’s General Investigation Unit, Tracing & Forfeiture & Money Laundering Division.

She is the proud mother of one daughter who enjoys reading, travelling, cooking and sports

Thanks. So a secretary (note taker, typist, caller upper and phone picker upper, lunch booker and buyer of anniversary gifts for bossman).

We always hear about MPs being rebuked for calling out persons who cannot defend themselves in the HOA.

What do you do when you are a public servant being abused by the HOA Speaker??

This is outrageous behaviour by the Speaker.

You aren't a servant if you are getting paid and not working, that makes you a parasite.

@ComradeSheepie, constituents must under penalty be required to spend quality prior showing up at polling stations on sizing up who will not get seated to represent their own interests on the House floor. ― Yes?

Just when you think the HOA Speaker could not get any worst. She males the previous speaker look intelligent. Are we going to have another 4 years of this speaker who truly has shown she lacks the qualifications for this position?

She rants and raves about a civil servant not moving at her beck and call, and the Junior Minister then comes behind and reads a statement that calls everything into question she is ranting about.

the junior minister was wrong too. It was NOT ok for Russell to give the explanation that he was in Cowpen road so he didnt know about Bamboo town. That's ludicrous. that is the exact reason why you have a command center where all information flows to and the leadership is there together to coordinate ALL activity knowing ALL information The fact that the Speaker, junior minister, leader of the opposition nor Russell seemed to understand that is mind blowing. This after Joaquin, Matthew, Irma and Dorian. Anyone remember 2 days before Irma hit when Stephen Russell declared he was "going back to his office to write the plan?

Your Comrade Tal was "tellin' youse with murmurs about what I foresaw in the cards after observing House of Assembly session day one ... Like pointing out how the Comrade House Speaker was well on the disciplinary track ... But little did I even think that her latest rebuking anger fetish ways would extend beyond the bounds of the House's Chamber and with such Hurricane Dorian force gusto. Even the new picture doesn't resemble Madame Speaker's off-center wigged caricature captured by media photographers on session day one. The premier has really *cut his appointment mustard first with the lawyer and now with the daughter of Bamboo Town's comrade sister. Still one shouldn't just make up fictional characters as real life characters...Now should we.― Yes?

This government is an utter disgrace.

Obviously the daughter of Bamboo Town comrade sister Patricia Deveaux must've not bothered to attend the mandatory' 9 - 5 classes on the most must things a parliamentary speaker must memorize like never rise all wigged and robed up from their assigned chair to recognize themselves “be now heard” uttering. Rule #1: As enforcing the same vision as that of the government of the day to advance the governance over Our Colony. ― Yes?

Typical of a woman trying to demoralize a man, had the roles been reversed this would fall under abuse.

That outburst was totally uncalled for the speaker. The use of parliament and the speaker's chair to attack a civil servant.

In more advanced society, a senior politician is usually elected speaker. In the Bahamas we do things backwards.

She is far too incompetent and given to personal attacks from the seat that hopefully she will be booted from.

She is unfit for the office of HOA Speaker. Period.

It would appear Madam Speaker like so many of her colleagues missed the class on decorum, parliamentary procedures and let’s throw in the art of politics 101!