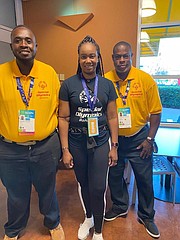 Deron Forbes was fourth in his 400m preliminary round.

Team Bahamas went after five medals and came away with four. They also recorded a fourth place in bowling singles division M5 and missed bronze by seven pins.

Deron Forbes finished third in his 200m prelims. He will run in the finals today.

Bocce doubles team of Stephen Russell and Vashni Thompson won both of their matches today.

They defeated Aruba by a score of 10-1 and then beat Delaware by the same score of 10-1. They advanced to the gold medal match

They will continue play today.