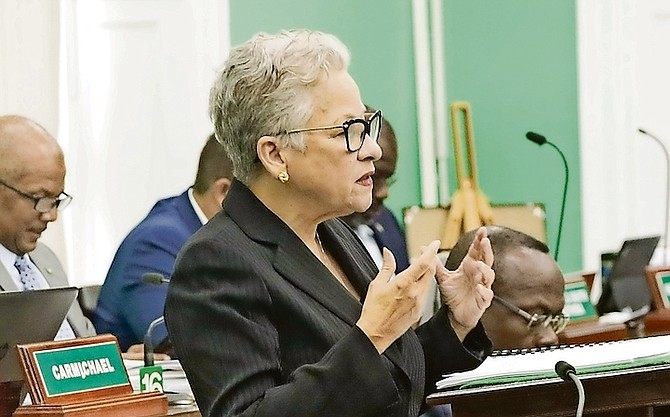 THE government will build two new schools on the Family Islands at a cost of $16m each, Education Minister Glenys Hanna Martin announced in the House of Assembly yesterday.

Mrs Hanna Martin told MPs the schools will be constructed on San Salvador and at George Town, Exuma.

Construction will begin this fiscal year, with completion targeted for the San Salvador school in 2023, she added.

“The first is San Salvador High School, which is expected to be completed in 2024 and the second is the George Town Primary School. The school is inadequate and San Salvador has serious serious issues and additionally, they’re estimated at about $16 million each so I’m excited about that.”

She also revealed several ongoing school projects are set to be completed this year after experiencing several delays under the previous administration.

Officials are working to complete construction on several classroom blocks at those schools.

She added: “In the 2023 and 2024 years, we are going to get to complete the East End Grand Bahama and the Inagua Comprehensive schools.”

The minister also praised the government’s efforts to complete ongoing school repairs in record time at several schools including Sybil Strachan Primary and CW Sawyer Primary among others.

As for other repair works, she said the ministry is hoping to have them all finished by this August, adding that some $15m has been budgeted for school repairs in this fiscal year.

Shifting her focus to campus safety, the minister also revealed several of her ministry’s plans to better protect students in the wake of several violent incidents that would’ve occurred on campuses recently.

She said: “In the summer, we intend to bring the National Association of School Resource officers to The Bahamas to train officers so that we are able to dispatch fully trained police officers who are not just straight policing, but they have a nuance that is designed for the school campus.

“Additionally, we have recruited roughly 60 security officers and we are going to cause for all of them and the currently serving ones to be trained by the police. They’re not police officers, but they will be more equipped. The school campus is not what it was ten years ago. It’s something different and we want to ensure that we are able to manage and stabilise what is happening on the campus.”

She added that officials are also working to improve lighting on schools as well as expand CCTV coverage.

“In the SURE programme, what we did when we saw these incidents, we got about 30 young people, boys from the very schools who were deemed to need attention, I’ll put it at that and they are now there at SURE and they are getting tested in literacy. They are getting psychological testing or counsellling and the Defence Force and the Ranger programme is also assisting us.

“It’s not militaristic, but it’s just helping the level of fitness, etc, and we’re hoping that this more progressive approach to how we deal with young people who are deemed needing more attention that we are able to yield the results that we would like to see, but, of course, this has to be measured also,” she added.

What kind of schools will be built to house less than 100 students in San Sal or Exuma for $16million??

That is exactly what I am wondering.

So tragic how these politician like to boast about stupidity.

I do not know what they will build for such a value but I do know that the family islands have always been neglected, it time they have new infrastructure also and more technically advanced schools.

This will be a modern state of the art school. It will be able to withstand mass shootings. It will have Internet access 7/24. And it will have classrooms second to none.