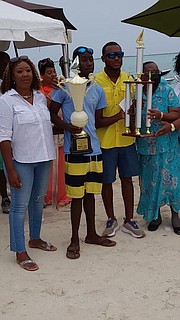 THE AWARD presentation for best overall skipper in memory of the late Anvil Bishop Taylor presented by his wife and family.

The Barraterre regatta and festival has always been a staple on the country’s cultural calendar.

The highly anticipated event attracts many locals as well as international visitors.

Every year, the residents of Barraterre use this opportunity to showcase their many talents – whether it’s song, dance, cooking and – of course – sloop sailing.

This year’s 37th regatta and homecoming festival featured three days of sailing with Class ‘C’ sloops, and many skippers from throughout The Bahamas competed for cash prizes and trophies. Some of the sailing sloops that took part in the regatta were also built on the island.

Onshore activities throughout the day included games such as hoopla, quadrille dancing, plaiting of the maypole, succulent Bahamian dishes, and native crafts on display.

Music was a major component of the regatta, and at night a variety of Bahamian entertainers such as D-Mac, Baludy & Nishe L.S. were showcased at the site.

The festival also featured rake and scrape music, maypole plaiting and a talent show. “This year’s Homecoming & Regatta festival was awesome,” said Annie Lloyd, Barraterre homecoming and festival president. “The committee had a small window for preparation, and despite the many challenges, we did it. “Next year, 2023, we are looking forward to a bigger and better festival weekend as we anticipate a larger crowd and eventful weekend.”