Davis says Budget is a foundation for change 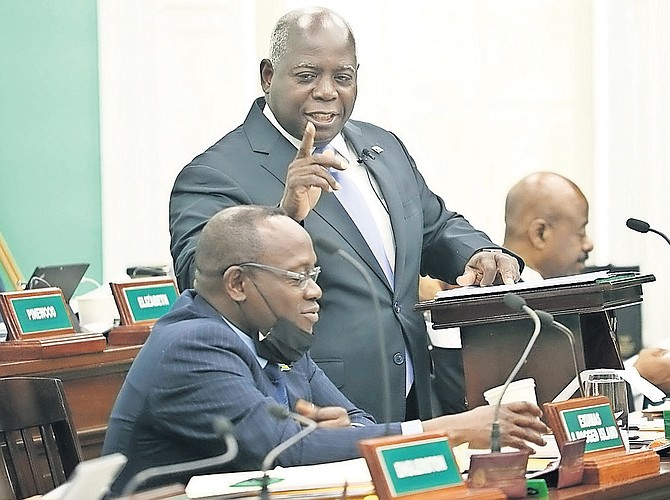 PRIME Minister Phillip “Brave” Davis yesterday defended his administration’s budget for the upcoming fiscal year against the Official Opposition’s criticisms as he wrapped up debate at Parliament on his party’s first fiscal plan since it took office.

Mr Davis said the 2022/2023 budget laid the foundation for change and suggested criticisms from the opposition that the budget lacked fiscal responsibility were hypocritical.

he opposition has been critical of the government’s budget for lacking growth and said it did not address the modern-day concerns of Bahamians.

However, Mr Davis shot back yesterday, arguing there were no meaningful attempts by the former Minnis administration to grow the nation’s economy when they were in office.

He also said his administration was taking a different and more focused approach to tackling issues facing the nation.

“As the Bahamian people are well aware, we face enormous challenges as a country,” he said. “I welcome thoughtful debates about how best to confront these challenges, but partisan attacks not made in good faith – well, Madam Speaker, I won’t waste too much of your time or mine on those.

“Lectures about fiscal responsibility from folks who routinely failed to meet their own revenue projections, who borrowed over $3bn with little to show for it, who spent $20m on sidewalks during a pandemic when people were struggling to survive - the same people who poured nearly $200m of the taxpayer’s money into the Grand Lucayan and then failed to land a good deal for the hotel.

“Taking lectures from the authors of those fiascos? That doesn’t make too much sense. Similarly, how is it that the same crew who failed to close a single significant new investment during their entire term in office, made no meaningful attempts to diversify our economy, somehow now imagine themselves experts on economic growth? Their plan for economic growth was to raise VAT by 60 percent and we all know how that turned out. And how should we respond when they pontificate about transparency, when they kept so many key details of their pandemic spending secret, hiding behind the endlessly renewed Emergency Orders?

“Finally, I must confess that when they have the temerity to speak on the issue of governance, all I can think about is that Oban deal – you remember the one with no environmental impact statement, sketchy individuals and fake signatures? What to make of complaints about my government’s travel when they come from people who, we found out yesterday, spent half a million dollars alone on a designer bed, designer mirror and other luxury items for an ambassadorial residence? It makes one wonder how many other residences had special budgets, which the former Minister of Foreign Affairs was not aware of? And yes, these are the same people who gave their people membership in airline lounges and new travel allowances for spouses.”

Mr Davis also responded to claims that the 2022/2023 budget did not coincide with what was laid out in his administration’s fiscal strategy report.

“The fiscal strategy report is not the budget,” he said. “The only document that can commit the government to revenue and expenditure allocations is the budget, which we are debating at this moment.

“The side opposite is all too aware of the process of preparing the annual fiscal report and the general principles that apply.”

Addressing criticisms surrounding his government’s proposed salary increases for public officers, he said: “They complain about a $50 monthly increment to civil servants who make less than $30,000 per annum.

“C’mon man, where is your heart? Do you have a soul? We all know that this is not enough to make up for years of stagnant wages, but it is a first step made during our first budget with more action to follow.

“They criticised this salary increase, yet, while they were in office, public servants did not even see an increase of a dollar. In fact, they put a stop to annual increments, ensuring that wages shrank relative to inflation. It brings to question their credibility and sincerity on this issue.”

However, the remarks prompted a response from East Grand Bahama MP Kwasi Thompson who accused Mr Davis of being “misleading.”

The proposed measures include increased social assistance, targeted minimum wage increases for workers in the public sector and salary raises for teachers and most public officers.

“These are difficult times,” Mr Davis said yesterday. “The global economic picture is very volatile. Supply chain issues and high energy costs are causing prices to rise around the world. Yet even in times of uncertainty, we can steer our country forward. This first budget, this first step, establishes a way forward to a more inclusive model for national development, one that is focused on widespread growth and equality.”

Lower and middle-class Bahamians now know that Short Fatso Davis is unwilling to do anything at all to help ease the unbearable pain and suffering they are now experiencing. Short Fatso has simply refused to do away with all taxes on most food items as well as the gasoline tax which is providing the government with enormous windfall tax revenues as a result of the extremely high percentage tax rate now being applied to exorbitant gasoline prices.

Yes indeed, most lower and middle-class Bahamians now know only too well the cruelness and heartlessness of Short Fatso Davis as he goes about cutting deal after deal to benefit himself, his wealthy cronies and foreign investors.