FNM ‘will be fine’ despite Gibson case 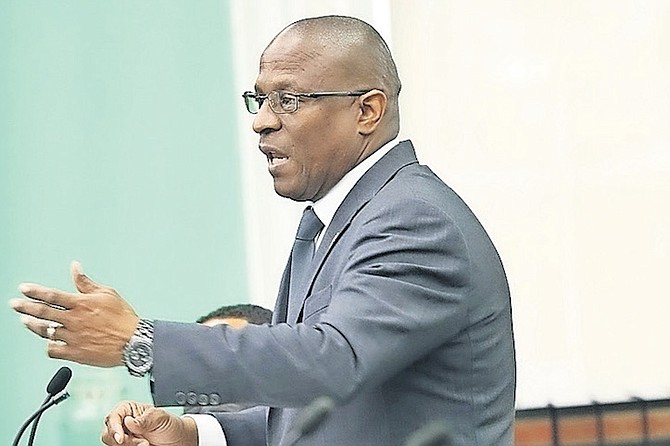 LEADER of the Opposition Michael Pintard in the House of Assembly yesterday. Photo: Racardo Thomas/Tribune Staff

OFFICIAL Opposition leader Michael Pintard says his party will “be fine” in the aftermath of a Free National Movement MP being arraigned in court earlier this week.

Long Island MP Adrian Gibson faced charges in a Magistrates Court on Monday in relation to a list of charges connected to allegations that he did not declare his interest in contracts awarded by the Water and Sewerage Corporation.

The situation has led many to wonder whether the MP will resign in view of the case.

He was also asked to elaborate on the view that the public perception of the party will suffer as a result of what is happening to Mr Gibson.

“The Progressive Liberal Party had multiple issues when they left government, much of which in terms of image, much of which was quite valid. The accusation, the concerns about the way they governed was quite accurate,” Mr Pintard said yesterday.

“Today, they are the government and so their new leadership determined a course of action and sought to sell to the public, here is what we are about, here is where we’re going and that’s what I’m doing right now. So, we’ll be fine.”

Meanwhile, Prime Minister Philip “Brave” Davis told reporters the decision to resign would be a “personal choice” for Mr Gibson to make.

“I’m not going to get into that. That’s a personal choice of his to make and he’ll decide whether he wants to resign or not. There are some conventions that attend to matters of (this) nature and it’ll be good for him to advise himself of those conventions and follow them.”

“The auditor general will be called in to look at it,” Mr Davis also said.

Former Prime Minister Dr Hubert Minnis has previously said “a man is innocent until proven otherwise” when pressed for comment on the view that the MP should resign.

Wasn't the PLP 'fine' despite the arrest of Shane, Fred & Ken?

This case will be decided in court in short order, not on the 2026 campaign trail.

Thats the same thing they said before. Een nobody gat time for this. Is y'all party.

I agree. Stop hoping that a speck of PLP shit will stick on Adrian.

You need to go take the PLP scandal log outta y'all eyes, bro.

You missed the point, like you missed it before election. This the final straw. Do what y'all want.Een nobody gat time to waste standing in the hot sun voting for y'all if this the type of hubris y'all gonna support. Y'all had big convention to talk about arrogance and apparently een learn nuttin

All that has advance the Bahamas is PLP and the record can not be denied what has the FNM done?

The PLP trolls are worried and are resorting to trying to broker deals with how Adrian can go quietly off the scene.

But it's too late for making deals ....... The charges are laid and the case will go before the Supreme Court.

Then the details will be laid bare for ALL to see. So be it.

Karma is a bitch. When Brave was digging a hole for Adrian, he forgot to dig a few for himself & his cronies.

When you tell me what happened to the fellas who broke into Braves house and took his jewelry, then I'll answer you about Toogie & Bobo.

Unless it's just case of our ComradeSheepRunner12 has taken to the bottle which might go explain the smells behind his constant yappin' over the dealings this and persons that makes him ideal candidate be hauled into CID headquarters undergo interrogation by CID policeman's seeking tie-ups outstanding loose ends ongoing investigative matters ― Yes?

Lol, I love your retorts

"That’s a personal choice of his to make and he’ll decide whether he wants to resign or not. There are some conventions that attend to matters of (this) nature and it’ll be good for him to advise himself of those conventions and follow them.”

“The auditor general will be called in to look at it,” Mr Davis also said.

Can you imagine these words coming out of Davis's mouth without him choking on them?

Where were the Westminster "conventions" then???

If the rumor circulating which seems to have logical merit then might explain with good reason why the Financial Disclosure acts that first required some nominees for election as a Candidate and again if elected to make sworn disclosures of assets, debts and sources of income... may be unnerving others over if the policeman's might be performing a Sherlock Holmes forensic audit to see if there's legit explanation to explain why what appears to be a sudden rush of cash, properties and other assets that aren't exactly aligning with what was previously declared on their disclosure(s). ― Yes?

Pintard and the others who sat quietly in the House of Assembly on Monday while Adrian was being hauled before the courts in the middle of the Budget debate are just as guilty of dereliction of collective duty as the PLP for bringing these trumped up charges to court.

The FNM Council will deal with Pintard & his double dealing Chairman .......... And Bahamians will come to see the folly of their ways in putting a demagogue in power.

This case has opened a Pandora's box of political intrigue and behind-the-scenes wheeling & dealing.

Indeed Comrade SheepRunner12, may I add how the mainstream media people overlooked how important a role 'financial disclosures' will be played out in open court and to what will be its stretch in reachin' for truths and notin' but da truth. Comrade, why even you yourself the justice seeker pretended not have been aware that contingent of policeman's had landed on Long Island to carryout a lawful military style searches and seizures of assets. ― Yes?

The 242 media is compromised. The ZNS, CB, NG, Tribune, BJ & EWN do not seem to have the moral integrity or professional courage to stand up to the PLP propaganda machine. Where are the modern fearless investigative journalists???

The PLP Govt has pillaged all of the media houses to the point that it seems that the media houses are just parroting whatever the Govt wants them to say. The standard of journalism is below zero. The Fourth Estate is non-existent in 242.

This sheeprunner guy must be drunk on FNM koolaid . Whyndi you guys interact with anyine who lives in their own reality like that?