INSIGHT: Gibson’s parliamentary future isn’t as cut and dried as some would have it 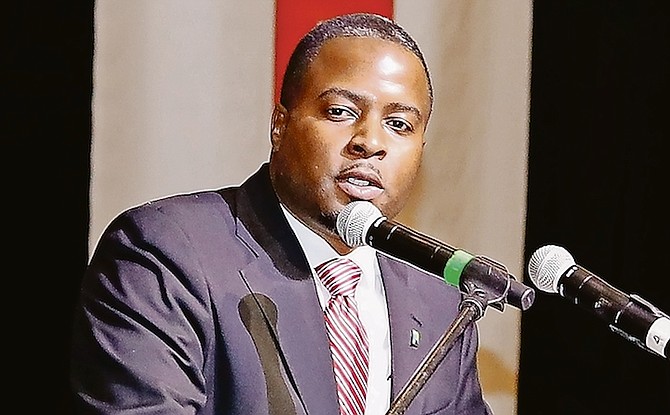 WITH a series of charges filed against Adrian Gibson, the question of whether he should remain as an MP has been in the air.

The FNM Long Island MP is accused of a host of charges relating to corruption and his time at the Water and Sewerage Corporation – but to hear some people talk, you’d think the case had been heard already and the outcome decided.

Former House Speaker Halson Moultrie was one of the first to suggest Mr Gibson’s position might be under question, saying “any honourable” parliamentarian accused of criminal offences should consider resigning.

So which is it? Should Mr Gibson go, or stay?

Let’s take a look across the water to the UK, where Prime Minister Boris Johnson has seen his tenure in office hanging by a thread over a series of parties that took place in his offices breaking the rules of lockdown which his government had created.

Ultimately, it was revealed he did indeed break the law – and had to pay a fine for breaching lockdown. But it wasn’t the law breaking that was the biggest threat to Mr Johnson’s post, it was what he told Parliament about those parties. He denied, and denied, and denied – and that was his problem.

Misleading Parliament is, under the Westminster system under which we too operate, one of the likeliest things to lead to a resignation. Parliament needs to rely on the information it receives being honest and accurate – so if it is misled, or lied to, the decisions it makes is based on false information. If you mislead the nation’s decision-making body, you are expected to resign. Mr Johnson has not as yet, but with him having only just hung on through one vote of confidence and more revelations about his behaviour drip-dripping out, that may be just a matter of time.

At the time of being charged, he has been removed from his job even before being convicted – which seems a very different standard to that of being “absolutely innocent until proven guilty”.

It is as if the force does not wish to be tainted by association with an officer who may ultimately be convicted.

And there is the nub of the question for Mr Gibson. He is innocent until proven otherwise, but the concern is more of a political one than a criminal one when it comes to talk of resignation.

The FNM has decided to stand by Mr Gibson, although when asked if Mr Gibson would resign, his party leader, Michael Pintard, gave a non-committal response of “no comment”. He went on to say of his party, “we’ll be fine”.

As for the party in government, Prime Minister Philip “Brave” Davis said it would be a “personal choice” for Mr Gibson on whether he should resign or not.

Mr Davis said he was “not going to get into that” – which would be wise considering he never convincingly dealt with questions about his own lockdown behaviour, when he said he went to pay for Christmas presents when he was supposed to be in quarantine. He doesn’t want to get tangled in questions over standards in public office in case any of them come back on him. He only has to look at the example of Mr Johnson to see what could go wrong there.

So the likelihood is that with little pressure from Mr Gibson’s political opponents, and his own party standing by him pending the outcome of the case, however long that might take, that Mr Gibson has every chance of staying in office until that day.

If the case becomes so much of a distraction that it undermines his work as an MP, that’s a different matter, and that’s up to him whether he can balance all those demands at a time when he is looking to defend himself in court.

But if all it took, as Mr Moultrie was suggesting, was an accusation of a criminal offence to push a Parliamentarian to resign, we would face the risk of unfounded claims and malicious accusations that could undermine the ability of lawmakers to govern.

Mr Gibson has every right to defend himself, and he is indeed innocent unless it is proven otherwise. But the talk of his resignation seems more like gossip for social media than anything else. Now, if only our justice system would move at a pace that we could be confident we’d find out the answers to these claims anytime soon.

Looks like trouble to me....it maybe impossible to fight those charges. He challenge may be bigger than resigning.

“ Misleading Parliament is, under the Westminster system under which we too operate, one of the likeliest things to lead to a resignation. Parliament needs to rely on the information it receives being honest and accurate – so if it is misled, or lied to, the decisions it makes is based on false information. If you mislead the nation’s decision-making body, you are expected to resign”

If this is the criteria or standard that our politician’s were held to then Brave Davis wouldn’t be Prime Minister today, some of us still remember the BAMSI Fire insurance fairytale.

The definition of a politician as described by WSC “ He’s asked to stand, he wants to sit, he’s expected to lie!”

Comrades, right here on this hereto newspaper's page you have heard from Malcom Strachan and you can make up your own mind if he has joined the mainstream media's pack that refuses to bark a single one of the 101 journalistic questions needs answering by the embattled MP . ― Yes?