WORLD VIEW: Summit of the Americas was worth attending 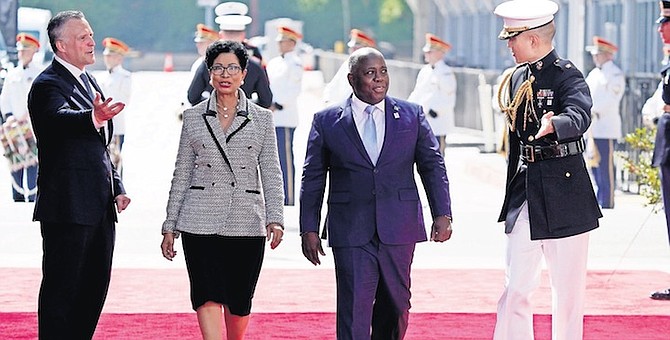 PRIME Minister Philip “Brave” Davis and his wife, Anne-Marie, prior to the opening ceremony of the Summit of the Americas on June 8 in Los Angeles. Photo: Marcio Jose Sanchez/AP

AS beauty is in the eyes of the beholder, so is success or failure measured by the beneficiary or the overlooked. Summits of the Americas, from the time they were initiated by the administration of the US in 1994, have overlooked the Caribbean.

Not so, the 2022 Summit held in Los Angeles from June 8 to June 10. The 14 independent CARICOM countries, except for St Vincent and the Grenadines, went into this Summit with a greater measure of confidence in themselves and determination not to be overlooked or ignored. They reaped the reward.

At a private meeting on the eve of the Summit, attended by all but 4 of their number, the CARICOM Heads of Government decided that they would not be satisfied with a scheduled meeting only with US Vice President Kamala Harris. They wanted President Biden present. They made it clear that while no disrespect was meant toward the Vice President, the critical issues that confronted their countries required the presence of the President himself to make the necessary decisions.

The President not only turned up, but he engaged fully with the CARICOM leaders and the President of the Dominican Republic. His engagement was so intense that the start of the first plenary session of the Summit, at which he was the first scheduled Speaker, had to be delayed while he satisfactorily concluded the discussion. Word spreading around the halls of the Los Angeles Conference Centre that the President was meeting Caribbean leaders, puzzled delegates from larger Latin American countries and created envy – the latter spoken in whispers.

What caused this unscheduled meeting to happen was a display of CARICOM unity that has only recently reignited in the Group. It was driven by the consensus on the way forward for CARICOM countries, fashioned two weeks before in Guyana at an Agricultural Investment Forum, led by Guyana’s President Irfaan Ali with the strong support of Barbados’ Mia Mottley, Trinidad and Tobago’s Keith Rowley, Antigua and Barbuda’s Gaston Browne, Belize’s Juan Briceño and Dominica’s Roosevelt Skerrit.

At that Forum, the representative group of leaders had agreed on an actionable and time-bound plan regarding food and energy security, transportation of food within the region, and the removal of tariff barriers between CARICOM countries. They also agreed that, after initial hesitation by several of them, they would attend the Summit of the Americas not only to register their dissatisfaction with the US decision not to invite the leaders of Cuba and Venezuela particularly, but to press for US support for CARICOM’s action plan.

In Los Angeles, they went forward with that spirit of unity, meeting President Biden not with a begging bowl but with proposals showing what CARICOM countries could and would do, and how the US could help them gain access to international financing, including from the US itself. The exchange with Biden and Harris was courteous but candid, hard truths were exposed but with honesty and respect. US officials in the room might have been concerned about the readiness to act that President Biden displayed, but whatever bureaucratic delays might yet ensue, no one could doubt that action had been set in motion.

Sceptics, including persons like me, who have attended many inter-governmental meetings where statements are made and eventually discarded, are tempted to see proof before accepting sincerity. But there was an electricity in the Biden encounter that appeared more credible; it generated a sense that something might actually come of it.

The US President agreed with CARICOM leaders and the President of the Dominican Republic that they would establish three joint committees, which would be “focused, and time bound in order to urgently address challenges related to energy security, food security, and development/debt finance in the region”.

Not five days had elapsed when, on June 14, the US government wrote to CARICOM Heads and the President of the Dominican Republic, announcing its co-chairs of the Committees and its readiness to convene a meeting on June 20 “to discuss next steps towards achieving concrete, near-term progress on the designated topics”. This response has to be rated among the fastest that the Caribbean has had from the US concerning any matters that were initiated by regional countries. As I remarked in an interview, published in The Miami Herald on June 10: “This has been a breakthrough meeting for us. Biden has shown that he’s willing to move.”

Movement, however, must not be mistaken for progress which will only be achieved if CARICOM countries and the Dominican Republic participate in these Committees with unity of purpose and with solid arguments that are backed by rigorous research. The persons, nominated by the Caribbean side should also be experienced and clear-eyed negotiators.

The Caribbean urgently needs drastic change in the rules applied to access for concessionary financing by the International Financial Institutions over whose policies the US, as one of the largest and richest members, exercises influence. The region also requires change in lending policies to match loans to needs. One of the region’s biggest needs now is transportation to move food production within the region by sea and air, reducing dependence on foreign foods, strengthening agricultural sectors, and lowering the cost of food products.

Hanging over every CARICOM country is also huge debt incurred to cope with external events, such as the COVID-19 pandemic, high oil prices and increased costs of shipping, and natural disasters – hurricanes, floods and droughts. There is an urgency to secure debt reduction, debt forgiveness, and debt rescheduling. The countries of the region cannot repay debt, on current terms, and yet implement the plans that will make the difference to their survival and progress.

No Summit of the Americas in the past could reasonably have been considered a success by the Caribbean, but at this Ninth Summit, the Caribbean by the harmony and determination of its leadership, achieved movement. Progress depends on maintaining both resolve and unity.